Tolomato Docent Louise Kennedy recently made a trip to Cumberland Island, a Georgia location a couple of hours north of St Augustine that is now a national park and can be reached only by a once-a-day ferry. One of the attractions of the place, which was formerly a plantation and estate, is its little family cemetery.
The cemetery is about the same age as Tolomato, although it continued in use for several decades longer than Tolomto. You will notice similarities in the vaults and markers.  It was very common for people who lived on these somewhat remote plantations to maintain cemeteries on their own property rather than going into town to bury family members in the church cemetery.
Louise gave us this account, with its accompanying photos, and tells us the stories of some of the people buried there. 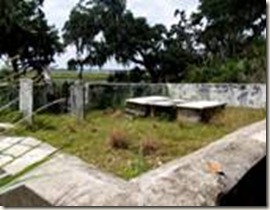 This historic abandoned, slightly over-grown cemetery is located a little northeast of Dungeness, the old four story main house belonging to the Carnegie Estate on Cumberland Island, Georgia. Besides the visible headstones, there are also unmarked graves at the site.
Major General Nathanael Greene, of Revolutionary War fame, purchased the property at Cumberland Island on August 11, 1783. He died of sunstroke three years later and left the property to his wife, Catherine. She later married Phineas Miller, who had been the tutor to the Greene children, and who took over management of the farm. He died in 1803 and there is no marker for his grave. Catherine died in 1814, and the stone on her above-ground vault reads: “She professed great talents and exalted virtues.”
The property then passed to Catherine’s daughter Louisa, who was married to the plantation manager, James Shaw, a Scot. He died in 1820 and is buried under the table marker shown in the photo. The touching inscription reads: “Sacred to pure affection this simple stone covers the remains of James Shaw, His virtues are not to be learned from perishable marble but when the records of heaven shall be unfolded, It is believed then will be found characters as durable as the volume of eternity.”

Probably the best known person (formerly) buried at the Greene-Miller Cemetery is Henry “Lighthorse Harry” Lee, Revolutionary War general and the father of Robert E. Lee. He was a friend of Nathanael Greene. In 1818, while sailing north along the Georgia coast, he became ill and sought refuge at Dungeness. There, Louisa Shaw cared for him until his death on March 25 1818. Some hundred years later on May 28, 1913 Lee’s remains were removed to the campus of Washington and Lee University, Lexington, Virginia, where they were placed along side those of his son Robert E. Lee. His marker is still visible in the cemetery, accompanied by a marker explaining that the remains have been moved.
Plantation employees as well as family members are buried at the cemetery. In a separate area are the graves of the housekeeper Catherine Rikart and her husband. She was born on July 26, 1831 in Mulhouse, Alsace, France and died 12 May 1911. Thomas M. Carnegie erected the markers etched in stone which read, “In affectionate memory of faithful and loyal service…” Her husband’s marker has been broken off of its base, but the footstone has the initials J.R.   Family cemeteries like this give us a little glimpse into the lives of people on the isolated plantations of the day. 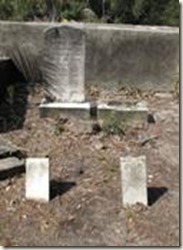 Posted by Elizabeth at 5:08 AM