We were open last Saturday, and we had 306 visitors, including a couple who flew down from Pennsylvania just to visit the cemetery.  So then I got to thinking…and I realized that, averaging it out, Tolomato Cemetery has had about 5,000 visitors since our start-up in the Summer of 2010.

Pretty impressive!  Below is a photo taken by Louise Kennedy of some of our visitors – from another century. Dressed in period dress are DAR and Garrison members at the tomb of Fr. Miguel O’Reilly; behind them is the marker for Don Juan McQueen, which the DAR installed with the help of these gallant gentlemen. 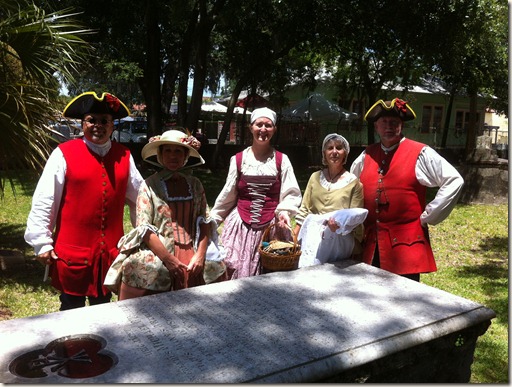 And here are our docents, including Nick McAuliffe, who was undeterred  by his recent broken ankle and even came by on crutches to sit by the gate for awhile, and Mary Jane Ballou, who played the harp in the chapel all afternoon. 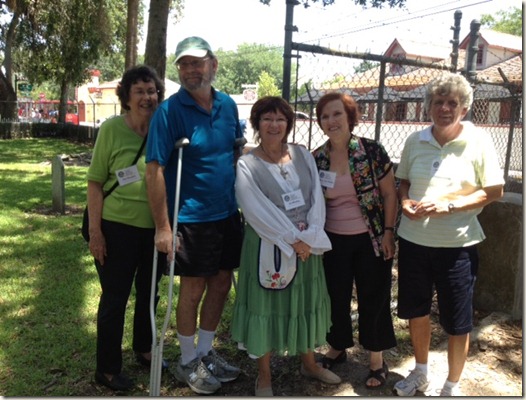 Posted by Elizabeth at 5:42 PM No comments:

NPR’s Greg Allen recently came to St Augustine to visit Tolomato as part of a summer program series entitled “Dead Stop,” which is, naturally, about various historic cemeteries throughout the US that might make an interesting destination for a visit. Well, at least a temporary destination.

He interviewed a couple of TCPA members, Elizabeth Gessner and Nick McAuliffe, and spent the morning rambling among the graves and learning about the fascinating historical figures who are buried at Tolomato.  He had clearly done his homework and was a good interviewer, and the resulting short program gives visitors an intriguing little glimpse of Tolomato.

Nick McAuliffe took this photo of Greg Allen, Elizabeth Gessner and Matt Armstrong after their visit to the Varela Chapel. 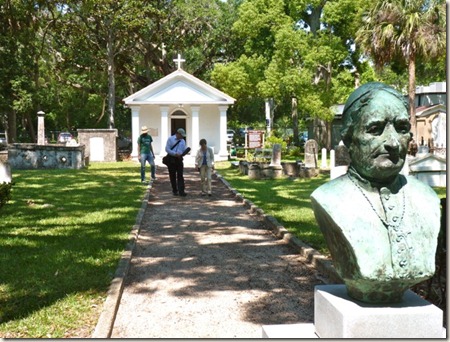 Posted by Elizabeth at 6:42 AM No comments: