One of the most interesting things that came out of our presentation last weekend was a discussion with our new board member, Brenda Swann, who is also the Deputy Director of Collections, Interpretation, and Programs at the St. Augustine Lighthouse and Museum. As such, she’s very much aware of the history of this wonderful site and its local connections, and she told us a fascinating story about the one of the first female lighthouse keepers (and first female Coasties) in the US.

One of the vaults in Tolomato bears the name “Andreu,” a Minorcan name that is now fairly widely distributed throughout St Johns County.  The vault bears a plaque dedicated to M. R. Andreu, given by his daughter, Nina. No date is given, and even the name of his wife is not given. 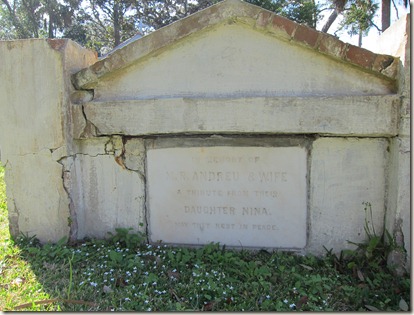 The first Andreu buried at Tolomato seems to have been Marcos Andreu, who died in 1793. He was married to a woman whose name, based on the handwritten record I have, was Mariana Tedori.

Among their descendants was Juan Andreu, who was appointed the very first official lighthouse keeper of the St Augustine Light in 1824, 3 years after Florida became a Territory of the US.  His cousin, Joseph Andreu, became the lighthouse keeper in 1855, but sadly he fell to his death in 1859 while painting the lighthouse.

At this point, Joseph’s widow, Maria de los Dolores Mestres, took over and became the lighthouse keeper and, technically, a member of the Coast Guard, since lighthouse keepers were considered members of the US Coast Guard.  Records exist of other women lighthouse keepers in the US, although she is certainly the first one of Hispanic descent.  She was the keeper until the outbreak of the Civil War, when the light was extinguished because St Augustine, a Confederate town, feared that it might guide Union troops to the city and aid their blockade of the port.

Maria also traces her lineage way back: Mestres was the Catalan (Minorcan) name that eventually was Anglicized to Masters, a name that any visitor to St Augustine will see on numerous businesses, buildings and even streets in the county. 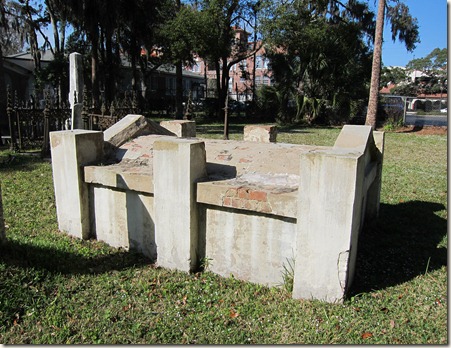 All of these people are buried at Tolomato, although markers, as usual, are scarce.  But any members of the Andreu family who might have more information are invited to get in touch with the TCPA and build the record of their family.  (By the way, any errors in this account are mine, and not Brenda’s!)

Brenda also told us another interesting thing:  On the third weekend in February, the Lighthouse is hosting a “Sea Your History” event, including a sea-related presentation on Saturday by scholars from the Smithsonian. You can get more information by clicking here.  It’s the same weekend as our February Open Day, but you’d have time for both events!

You can also contribute to the knowledge base.  The door prize for attendees will be a DNA testing kit ($200 value), which is part of a project to build a worldwide database of migrations of the human population out of Africa…and even to St Augustine.

Posted by Elizabeth at 1:03 PM No comments:

Another Opening, Another Show…

Here are your happy TCPA program presenters, celebrating after a truly wonderful group presentation at the Bishop Baker Center in St Augustine.  Left to right, we are: Elizabeth Gessner (I was  the MC and also discussed a few artistic views of Tolomato), Alicia Maskley (Preservation); Sarah Miller (Ground Penetrating Radar and Archaeology); Nick McAuliffe (Historical Records and Research); and Louise Kennedy (Genealogy and Burial Research). These are rather general descriptions of each person’s talk, but the overall idea was to give attendees an idea of what we do and to introduce them to some concepts in both preservation and historical interpretation of historic cemeteries, Tolomato in particular.  We also introduced the current board and elected our new board members, Greg Phillips and Brenda Swann.

Each of us did a 10-minute segment about our various specialties, and then the attendees had time for questions.  I have heard that there’s a video of the event, and depending on the quality, I may post it.

We also did a sneak preview of a new project…but if you weren’t there, you’ll have to wait for the formal announcement!  That’s a good reason to come to your TCPA events: to avoid the suspense. 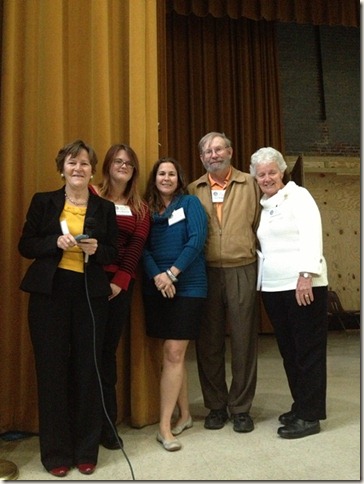 Posted by Elizabeth at 5:56 PM No comments: 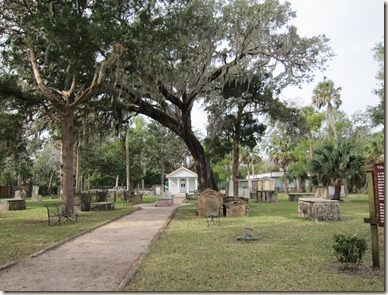 The photo above shows a wintry day at Tolomato Cemetery…a cold and breezy day, without many people walking the streets of St Augustine.  But warmer weather will come again, and we’re getting ready for the Spring visiting season. Although on our last Open Day this Saturday, which had similarly cold weather, we had a record of nearly 500 visitors…so perhaps the weather really doesn’t matter to most people.

We’re going to start this year by taking a long look at Tolomato, historically, in its material details, and even from its archaeological aspect at a special event this coming Sunday, January 27, at 3:00 pm at the Bishop Baker Center in St Augustine (159 St George Street, on the grounds of Cathedral Parish School).  Our gifted docents will present different ways of looking at Tolomato, ranging from our collection of historic photographs, to the diocesan records so beloved of genealogists, to underground GPR explorations and an inside view of our exciting preservation work.

Don’t miss this event if you’re interested in Tolomato Cemetery.  The presentation is free and there’s free on-site parking.

And this time we’re making a special request:  if you have any historic or even not so historic photos, postcards or other views of Tolomato Cemetery, bring them!  We’ll scan or photograph them with your documentary information about them for our permanent collection, and time permitting, we may even show a couple of them to the audience.  We are very eager to get more photos of Tolomato over the years, and anything you have is very welcome.  It doesn’t have to be very, very old: even a photo of your Aunt Maude taken in front of the gate in the 1980s would do!

We’re all looking forward to Sunday!

Posted by Elizabeth at 9:22 AM No comments: