St Augustine was founded in 1565 and Tolomato was established as a cemetery in 1777.  Located just outside the city wall and under the gun emplacements, the site had been in use since about 1706 as a Franciscan Indian mission, which would also have included a burial ground. Abandoned during the British Period, the arrival of the Minorcans in 1777 brought Tolomato into use again, this time as the parish cemetery. It remained so after the British left and the Spanish returned and built what is now the Cathedral on the Plaza.
But where were St Augustinians buried before that time?  Just this week, we had a dramatic meeting with the past. 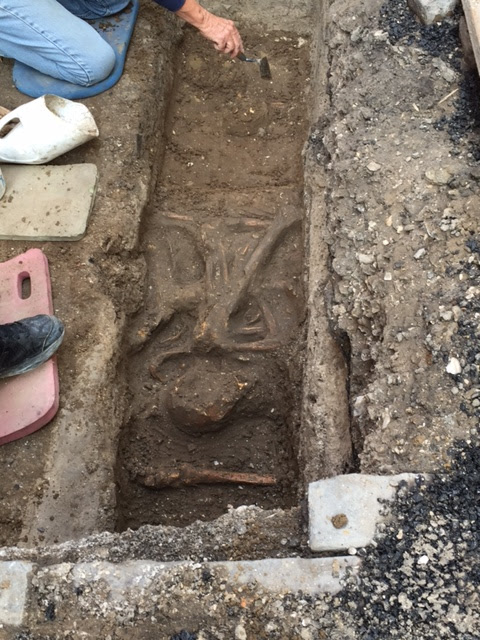 The City Archaeologist, Carl Halbirt, conducts digs at places where the ground is going to be disturbed down to a certain depth. There is a sewer replacement project planned for Charlotte St., which is one of the original streets of the city and passes by the site of the first permanent church established by the Spanish in what is now the downtown area.  The church was named Nuestra Señora de los Remedios, Our Lady of the Remedies, which was a popular name in the Spanish territories because of their remoteness from even the relatively rudimentary medical help of the times.  Prayer was really the only recourse.  The fact that the 18th century Spanish Military Hospital is located right next to this site indicates its importance in the history of healing throughout the centuries. 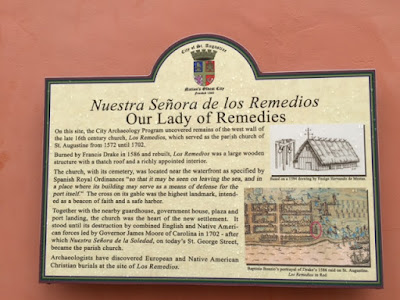 The building next to the site where Carl made this latest find is located on the exact site of Los Remedios, as indicated by the archaeological plaque on the west side, Aviles Street, commemorating another one of Carl’s digs. The building, shown below, is now in use as an art gallery but was built in 1964 by the State of Florida for use as a visitor information center.  It was constructed on the site of Los Remedios and its cemetery. One of the features of the building was a plexiglass window in the floor through which visitors could gaze down upon skeletons of those who had been buried there centuries earlier.  Tastes changed and it was eventually decided that this was not very respectful, so the window is now closed! 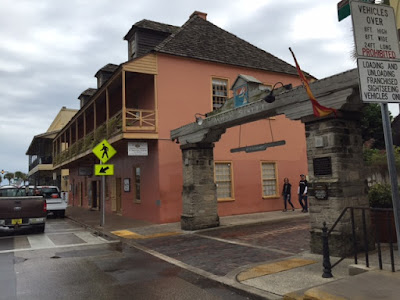 Los Remedios was built in 1572 and destroyed in 1586 by Drake, rebuilt and then destroyed for a final time by Governor James Moore in 1702, in the same wave of attacks that destroyed the Tolomato Mission near the modern Guana River Preserve.  Burials thus continued at the site for some 130 years, although we do not know with any certainty the number of people buried there.
The usual place of burial was under the church floor, particularly for the more important people in town. When the space under the floor was exhausted, burials moved out into the churchyard, which was usually set behind a wall so that all the space was consecrated space.  An interesting detail that you can see if you look closely at this photo is a bit of what is possibly the tabby floor of the church or at any rate a seal of clay around skeletal foot bones (which are pointing towards the right edge of the photo), indicating that these people were indeed buried under the floor of the church and not in the churchyard. 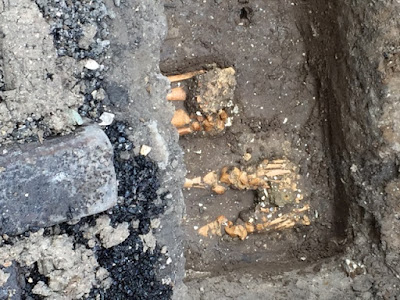 The general practice was to leave burials in situ for a certain amount of time, and when more space was needed, the few remaining bones of persons buried earlier were collected and reburied, often in an ossuary. The word is based on the Latin word os, meaning bone, and refers to a container or space for reburial of bones. Sometimes they were placed in niches in the wall around the churchyard, if there was a stone or adobe wall, and sometimes the ossuary was simply a separate walled-off space where bones were cast. And sometimes they were taken out temporarily and then reburied on top of the new and deeper burial, as probably happened here. 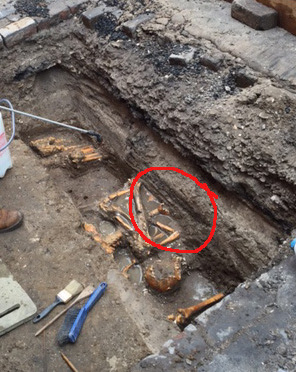 If you examine the photo above, you will see the remains of at least three people.  This means that the ground had been disturbed sometime way back when, since the 19th and 20th century disturbances of the ground for urban projects never replaced the burials but simply cast them aside or at best dumped them back into the ground helter-skelter.  But these “extra” bones had been carefully replaced, so Carl said that he thought they had been removed to permit new burials and then replaced in a small rectangular area that would have constituted the ossuary.  In other words, we were looking at some of the earliest St Augustine residents, possibly even the first settlers, and were looking at bones that had not been seen in hundreds of years.


Now take a look at the area circled in red.  This is a jawbone seated on top of a spinal column (which is lying under older bones that had been replaced in the grave) and of one of the interesting things is that the head points toward the east. Normally, Catholic burials in a cemetery were facing towards the East, since the Lord was supposed to come again from the east on the Day of Judgment.  However, this skull is facing west. Why is that? 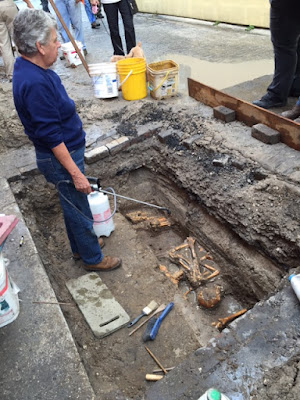 Fr. Tom Willis from the Cathedral came out to visit his “ancestral parishioners,” which is exactly what they would have been, since the Cathedral has inherited all these earlier Church burial spaces. When Carl mentioned that these bodies were buried in the church facing towards the altar, Fr. Tom Willis explained that in this situation, this actually was the East…the “liturgical East.” That is, the place where the altar is located represents the East, so if you are facing it, you are facing towards Jerusalem, the Garden of Eden and all of the other Biblical references of early cartography and spatial understanding of the East. And of course, it is there that you will see the Risen Lord, and this is why in the Catholic liturgy, the altar is considered the East.  Thus people buried under the floor in the church building would have been facing the altar, which in this case was at the west end of the building – but thereby became the liturgical East.  So while facing west, the burials within the church building were all actually facing the East, in the symbolic sense of the term.


When Carl came across these remains today, he fully expected to do so because he knows the downtown sites so well.  However, these burials were remarkably well preserved, probably because of their closeness to the water and the fact that they have been kept almost underwater for centuries. Air dries bones and reduces them to dust, but water will preserve them until they are removed from the wet environment…and then they dry out and turn to dust almost immediately.
Below, Carl probes to determine the starting point for the "sterile soil," that is, soil that has not been disturbed and lies underneath the burials, although the soil was too wet to determine this.  The water table is about three feet down at this point. 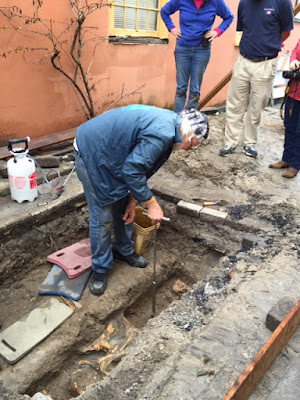 But back to Charlotte Street. What is going to happen now?  Carl would like the city to move the proposed sewer line to the other side of Charlotte Street, a narrow street that has already been disturbed many times, and then he will cover up the bones with a layer of sand and replace the soil and the street will be repaved with cobblestones.  And as for those remains that cannot be replaced in their spaces at the site, they will go either to Tolomato or to the Mission for reburial. 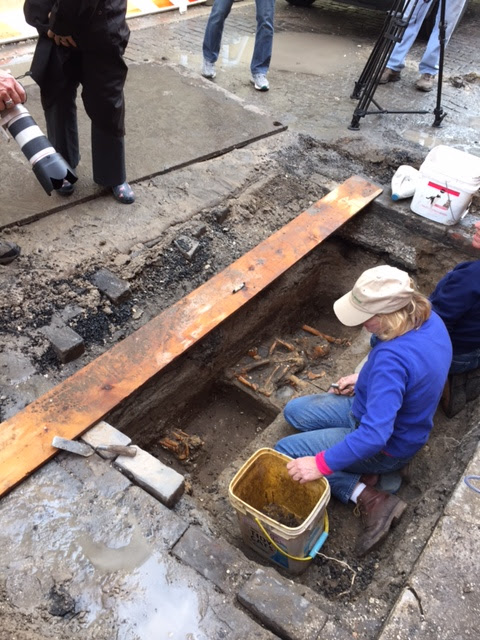 We don’t know anything about these individuals; above we see Dr. Kathy Deagan contemplating their bones. They were all once like us, living, breathing people walking the streets of St Augustine.  And I’m sure that they had no idea that, several centuries later , their very skeletons would be appearing before the eyes of thousands of people in a form that could not in any possible way have been imaginable to them - notice the large camera lens at the top of the photo!


But most of all, as Fr. Tom Willis reminded us, we should remember that hundreds of years ago, these people received the benefit of what is still one of the most important Corporal Works of Mercy, which are things to be done by a Christian to aid others: Burying the Dead. Even here in rough early St Augustine, desperate though its circumstances may have been, these human bodies were treated with respect and given the honor due them.  And we should thank our ancestors on this little peninsula for having saved and passed on this heritage to us.

Posted by Elizabeth at 2:33 PM No comments: