The cemetery is almost back to normal after Hurricane Matthew, but one thing that has been changed forever is our tree-scape.  Fortunately the two oaks that dominate the view, one on either side of the central path, are still standing – although one lost a massive limb that embedded itself several feet into the ground when it crashed down – but we have lost several trees at the back and our formerly beautiful red cedar is not what it used to be. In fact, it looks as if there should be buzzards perching on its broken limb, but you’ll be happy to know that the tree service will be out soon to make it more presentable. 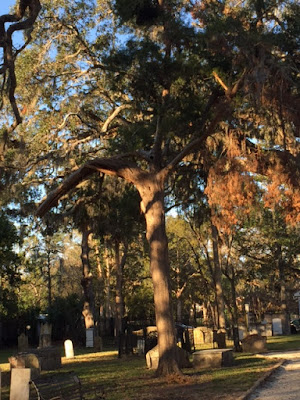 We talked with a local nursery recently about replanting a couple of trees and placing some bushes across the back fence to make up for shrubbery that belonged to other neighbors but was destroyed during the flooding that followed the hurricane. The flood water was mostly salt water, and you soon discover which plants are salt-tolerant and which are most definitely not!

Of course none of the current trees at the cemetery were planted by a nursery; in fact, most of them, with the possible exception of the cedars, were planted by birds and squirrels, our busy little laborers in the planting business. The cemetery was not regularly maintained for years after its closure in 1884. But even before that, the mid-19th century concept of the “garden cemetery” probably hadn’t made it to St. Augustine.


Our planting plan involves only plants that would have been used in the 18th and 19th century South, the active period of the cemetery, in the interests of historical consistency.  The imagery is important and has shaped our ideas on the basic question of what to plant in a cemetery, but there are also practical considerations.
When we think of cemetery trees, we usually think of willows or other elegiac, “weeping” trees, and possibly some somber evergreens here and there, and perhaps a laurel tree.  That is partly because these trees were frequently featured as symbols of mourning in gravestone carvings, artwork on funeral announcements, etc.  They were not always present in the cemeteries themselves, however, for practical reasons. Willow trees, for example, require a huge amount of space and water and were much less common in the ground than in art.  So trees and plants in a cemetery should be relatively easy to manage...not like this Southern magnolia, a towering tree that is leaning against our front wall and crushing it! 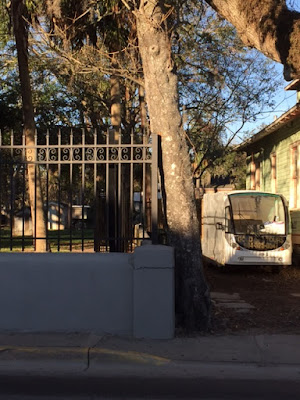 Some of the plants seen in cemetery art have been appearing for millennia. The laurel leaf, either in the form of a crown or perhaps as a leaf motif, goes back to Classical times, when winners of elections and competitions or even simply important people wore crowns made of laurel leaves. The laurel was considered sacred by the Greeks and a symbol of remembrance, because the Greek god Apollo wore a laurel wreath crown in memory of the mortal Daphne, the object of his affections, who had been turned into a laurel tree (precisely to protect her from Apollo’s intentions!).   It was incorporated into later Christian burial iconography to mean remembrance and Christian victory over death. 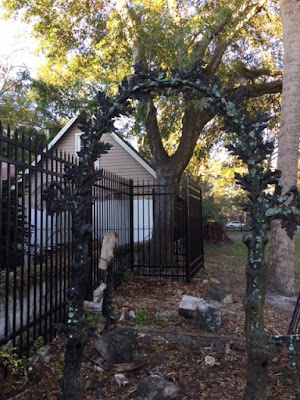 Here at Tolomato, we have a regional variation: the oak-leaf arch, which we see above, coming out of a broken trunk (the latter, of course, representing death).  But an arborist who was working in the cemetery pointed out that the archway must have been made in the Northeast, because the oak leaves, shown below, are those of the white oak, which does not occur in Florida or the warmer parts of the South.  So there are little details that will reveal interesting things about a cemetery. 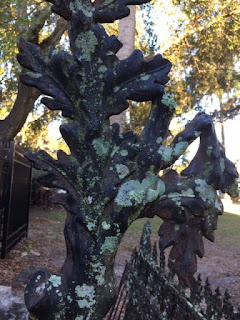 The weeping willow is a pretty obvious cemetery choice, and has been part of cemetery and funeral imagery for centuries. It’s weeping, after all.  It has the sad and sorrowful droop of a mourner and leaves that look like tears, so it was a natural for the iconography.  This particular willow, with a mourning dove flying up from the branches and little lambs resting peacefully beneath it, is in the ironwork on the gate to the Hernández grave enclosure (mid-19th Century). 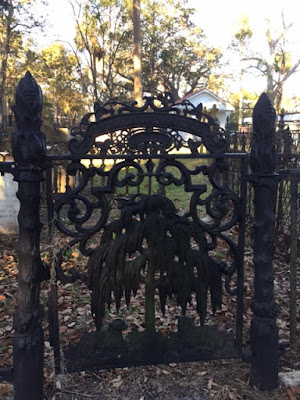 Note the ears of corn, a particularly Southern motif, although there are varying interpretations of its significance and origin.
There are also floral motifs, such as lilies and roses.  Lilies were often featured on the markers of children to express their innocence and purity. Here we see the marker for several Mickler infants, who died in the mid-19th century.  Their marker features tear-drop shaped fuchsia flowers. 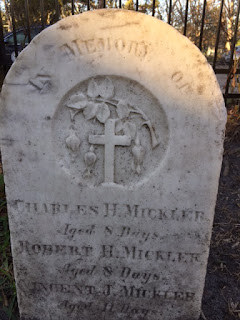 Roses frequently appeared on the markers of young women, such as this marker for Nena, the only daughter of Gaspar and Teresa Oliveros Papy, who died in an accidental shooting in 1861 at the age of 17.  The marker is embedded in the wall on the north side of the Oliveros-Papy vault at the back of the cemetery. 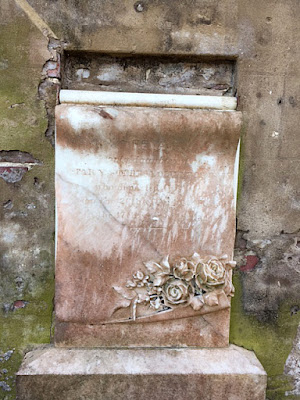 And of course, other flowers abound on our grave markers. Look for them on your next visit – and by that time, you might even see real live plants coming again to grace our beautiful little acre at Tolomato Cemetery. 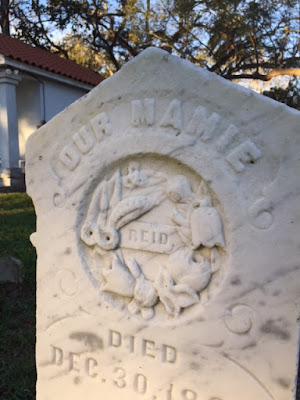 Posted by Elizabeth at 3:40 PM No comments: