As we know, the word Tolomato entered St Augustine’s geographical vocabulary in connection with a mission village of Guale Indians of that name, brought to St Augustine from South Georgia in the 17th century when they were forced to flee the attacks of other tribes. They first settled on what is now the Tolomato River, about 8 miles north of St Augustine, and our bishop at the time, Bishop Calderon of Cuba, reports visiting the village in 1675.

The bronze map in the photo is at the Mission Nombre de Dios and shows the chain of missions that spread out from St Augustine. 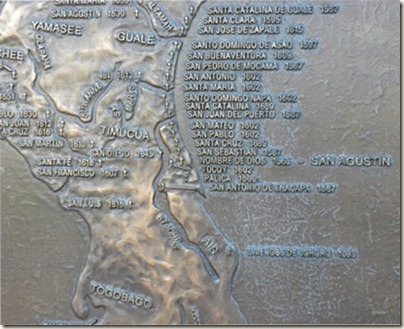 After the British attacks of the dawn of the 18th century, in 1706, the Spanish governor issued a proclamation requiring the outlying mission villages to move closer to St Augustine.  The Tolomato Indians moved to a little strip of land between the city wall and Maria Sanchez Creek, a secure location where they could be protected by the soldiers stationed at the Santo Domingo redoubt.  They were served by Franciscan priests from the convento in St Augustine and lived at Tolomato until they, along with the other Spanish citizens, left for Cuba in 1763.  Their descendants now live in the area of Guanabacoa, part of Havana.

Below we see one of the murals painted by Hugo Ohlms at the Cathedral Basilica of St Augustine, depicting his conception of life in a Florida Franciscan mission. 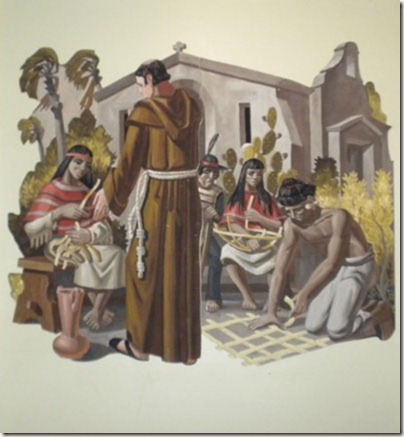 What is the point of all this? In mid-March, Flagler College is going to host a conference on Franciscan Missions in the Borderlands, a term that refers to the borders between the English and Spanish territories in what would become the United States. You can view the abstracts of the sessions by clicking here:  Franciscan Conference Program.

Posted by Elizabeth at 5:19 AM No comments:

The original group of Minorcans who were brought to Florida in 1768 were not all from the island of Minorca, but included Sicilians, other Mediterranean peoples, and Greeks.  Dr. William Turnbull, the Scottish doctor who wanted to found an indigo plantation in what is now New Smyrna Beach, was married to a Greek woman from, of course, Smyrna.  They thought that Greeks would be able to tolerate Florida’s heat better than Northern Europeans, and set sail to recruit workers for the plantation. 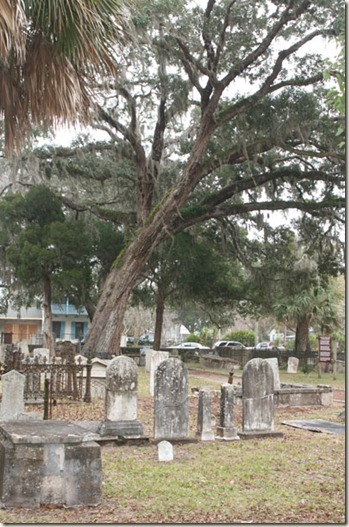 They were able to get some settlers from Sicily, deposited them on Minorca, which was then under British control, and sailed to Greece. The Peloponnese Peninsula, particularly the region of Mani, yielded willing immigrants because the Greeks were under attack by the Turks in that area.  Others, such as Gaspar Papy, were recruited from Smyrna, and some from Crete and the Greek Islands.  But Turnbull was unable to get the number of workers he needed, so he sailed back into the Mediterranean, collecting more recruits along the way. He  decided to spend the winter in Minorca and found that some of his earlier Italian recruits had married Minorcan girls. Not only the girls but their families and other Minorcans, wanting to escape the extreme poverty of Minorca, would accompany Turnbull back to Florida.  He finally left with about 1400 people, some 400 of whom were Greeks.

The Greeks in the group, who were Orthodox but whose priests had been forbidden by the Turks to accompany them, were served by the two Catholic priests, Fr. Pedro Camps and Fr. Bartolome Casanovas, and when the Minorcans (including under this name the Greeks and Italians) came to St Augustine in 1777, they continued to be part of the community. When they died, they were buried in Tolomato Cemetery.

The Greek Orthodox Church has a pilgrimage to St Photios Shrine every year. The lovely, icon-filled shrine occupies the site of the building where Fr Pedro Camps had his church and where these early Greeks would have worshipped, and it is considered a memorial to the first Greek settlers on the American continent.

On some occasions, the Greek pilgrims have a memorial service known as a Trisagion for the people buried at Tolomato Cemetery.  This year, the weather was numbingly cold and damp, but a hardy band appeared anyway with the pastor of Holy Trinity Greek Orthodox Church, Fr. George Ioannou, and stood in the old cemetery and sang the ancient chants in English and in Greek. 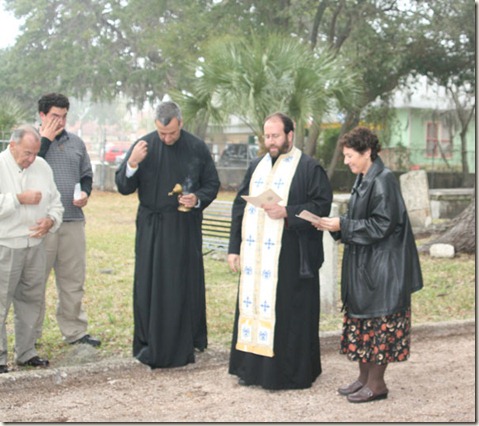 Posted by Elizabeth at 4:33 AM No comments: