Tolomato Cemetery receives many researchers every year, some of them interested in the people buried there, some of them interested in the technical details of the burials…and this year, for the first time, a researcher interested in the lettering of the marker inscriptions.
Our visitor, Lori Young, is a professor of art at the University of Ohio Bowling Green and
is Chair of the Graphic Design division.  She was making a tour of Southern cemeteries for a book project she is undertaking and we were delighted that Tolomato was one of them.  Not only do we have 18th and 19th century American inscription carving, we have a couple of interesting examples of Cuban work to show off. 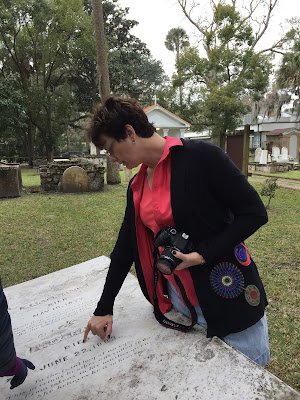 Part of Lori Young’s specialty, graphic design, is the area of typefaces, that is, simply the way the letter looks.  In this marker for members of the Avice family, you will see several different fonts. 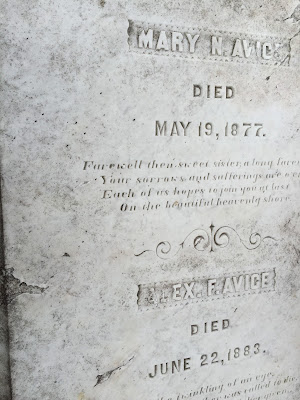 What is a font? Just to give you a brief introduction, a letterform is the way a printed or engraved letter is shaped in terms of slant, thickness, ornamentation, and style. Does it have hooks at the end of the strokes or is it straight up and down? Or perhaps it has flourishes and curlicues? Is it thick or thin, slanted as in italic or dark as in bold?

A typeface means a group of letterforms (a “font family”) that have the same features. One easy thing that distinguishes fonts when you look at them, for example, are whether they have little hooks (serifs) at the ends of the letters or just straight lines (sans-serif).  Below we see two modern fonts, Courier New (with serifs) and Arial (sans-serif) that are commonly used in printed documents:

Lettering on stones in cemeteries generally reflects the popular styles of the time and place and can be very useful in telling us something about the people buried there and their times.
Tolomato has several markers that are interesting from a typographical point of view. 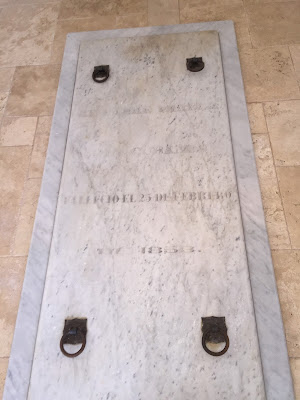 The Varela Chapel is first on the list. On the ledger stone that covers the crypt, Lori told us that we have an example of a so-called “Tuscan” font. This was based on a European wooden font (that is, one to be used when letters were printed with wooden blocks) and was sometimes used in stencils. It was popular everywhere, particularly in the Americas, including the Wild West, during the 19th century.
But the Varela stone was carved in Cuba of Cuban marble and not in the Wild West! However, Tuscan-style fonts were well-known everywhere for use in signs and inscriptions, and the Cuban stone carvers probably stenciled the lettering on and then tapped it out with their chisels. Below is a close- up of part of the inscription, which says, fittingly, “THE CUBANS,” referring to the fact that the marker was a tribute to Fr. Varela from his Cuban admirers.

On the front of the chapel is a stone with the classic winged hourglass, indicating that time flies and life is fleeting, although the Varela Chapel has the somewhat unusual variation of bat’s wings. This was placed by the Cubans who paid for the chapel and ordered its furnishings “to explain why we had built it.” This marker is in Spanish, and its translation reads, “This chapel was built by the Cubans in 1853  to preserve the remains of Father Varela.”  And Lori provided some interesting details that we had never noticed or considered before. 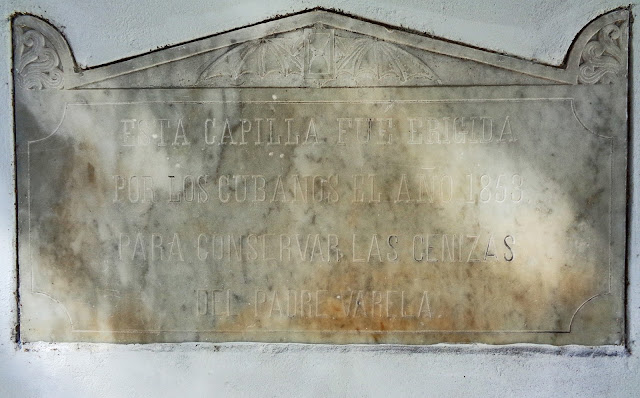 The font used on the stone is known as an “Egyptian” font. It’s blocky and has long bars and feet and is also known as a “slab serif” font. In this one, the serifs aren’t little hooks, but are solid, slab-like projections over the bases of the letter.
This font was formally developed in the early 1800s. There is no connection with Egypt in either the design or the artistic approach, but the impact of Napoleon’s trips through Egypt was very strong at the time and somehow the font became known as “Egyptian.” Because of the name, it became popular again in the early 20th century with the discovery of King Tut’s tomb. It’s one of the precursors of the famous mid-20th century Courier font shown earlier. 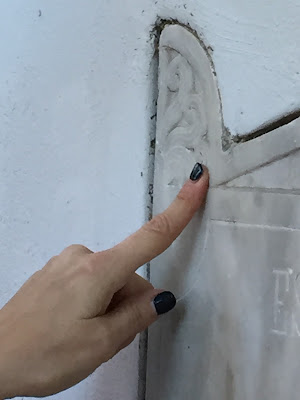 In addition, the decorative details she is pointing out here are worth examining. These were based on a branching pattern that was common in Southeast Asian temple art and came into Western design motifs, somewhat modified, in the 18th and 19th centuries with the increase of European trade in goods and antiquities with Asia.  Its vaguely recalled association with sacred spaces or items made it particularly suitable for use on gravestones or other Western funeral art. 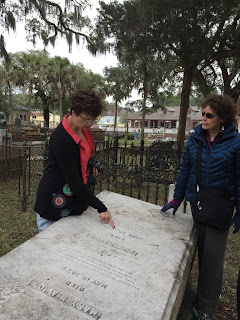 Lori also found a lot to interest her in this large marker for the Avice family, which you saw at the top of this article. Here, Lori shows Cynthia McAuliffe a letter in the rather large and varied (from a font point of view) inscription on this marker. She called our attention to the calligraphic drawing of the numeral “1” with a sort of upstroke at the top. Notice that there are no serifs, no feet – nothing, just an indentation at the top of the letter, as if it had been a pen-stroke and the writer had swept up the line. 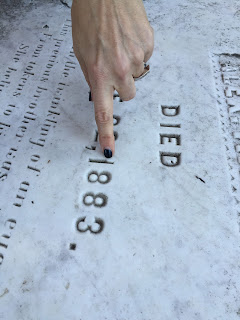 This was simply to distinguish the numeral “1” from its sneaky look-alikes, the capital “I” and the lower case letter “I.”  Anybody who has ever had to struggle over a password or email address where any of these three symbols (“1,” “I” and “l” – that would be one, eye and ell) could be present will certainly appreciate this!  Notice how it differs from the “I” in “DIED” above it.
Lori will keep us posted on her further research.  Below, she takes one last photo of the Elizabeth Forrester vault from 1798, the oldest marked burial in the state of Florida, its beautiful 18th century script unfortunately almost eroded away.  Lori Young will be on sabbatical next year to work on this project, so we might even hope that she can come back and visit Tolomato again and give us more fascinating details on this rarely considered aspect of cemeteries. 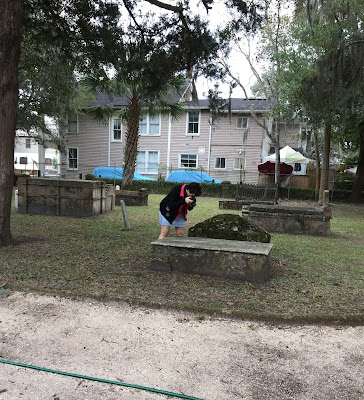 Posted by Elizabeth at 6:54 AM No comments: