As every St Augustinian knows, 1763 was the year that Spain ceded Florida to Britain in the treaty ending the French and Indian War  and all of the Spanish citizens sailed for Cuba.  This amounted to about 3000 people, including the Europeans, the different Indian groups and the free Africans from Fort Mose.

Recently I came across a Cuban genealogical site with rich information about this:  the names of several hundred of these refugees.  The names are mostly those of the male heads of family with a description of the group to which they belong (familias Isleñas, for example, meaning people from the Canary Islands who had come to Florida as settlers only in 1757, or familias de Yndios, meaning one of the Mission Indian groups).  Also included was information about their occupation and where they went when they got to Cuba.  To back this up, I came across an article by a Cuban scholar and another by Jane Landers and got a very interesting view of the fate of these former Floridians.

Because there were so many of them that they would virtually have overwhelmed Havana, they were sent to different areas. Most of the Canary Islands families, along with other Spanish families, the German Catholic families that had lived in St Augustine, and a miscellaneous assortment of non-European St Augustine citizens, were given land in a place called San Agustín de la Nueva Florida, in the province of Matanzas, northeast of Havana.  The parish church there, built in 1797 (the same year as the present Cathedral of St Augustine!) and thus after the arrival of these refugees, is named Nuestra Señora de la Candelaria y San Agustín de la Nueva Florida de Ceiba Mocha.  The devotion to La Candelaria was very popular with Canary Islanders.  I was unable to find a photo of the church, but here’s an old holy card of La Candelaria from a Cuban website. 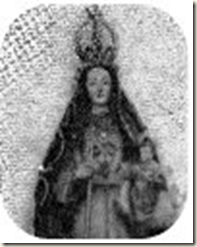 The Franciscan friars who staffed the missions went to the Convento de San Francisco in Havana, although some were reassigned elsewhere, and it indicates that at least one was sent to Caracas. The doctrinero at Tolomato, Fray Agustín Trujillo, went to the Convento but unfortunately died in Havana shortly after his return.

Other residents, particularly the mission Indians, went to a place called Guanabacoa, not far from Havana.  The town church, Nuestra Señora de la Asunción, is shown in this photo by Herb Frazer from the Charleston Mercury.  It was built somewhere between 1721 and 1748, so it would have been standing when the St Augustine refugees arrived.  We know that the cacica (the female chief) of Tolomato, María Francisca, died in Guanabacoa and was buried there. 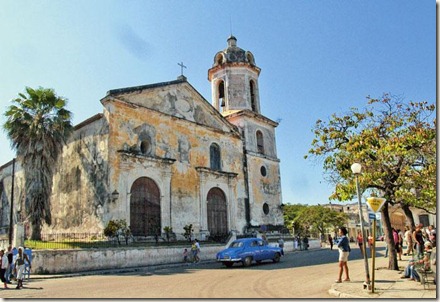 Guanabacoa had long been an area reserved to Indians, who had their own governing councils and maintained other customary institutions, and the new residents – who were from a wide variety of tribes, but who had been living in a tribally mixed situation in the few remaining, consolidated Florida missions – probably found it a congenial location.

Many of the free blacks from Fort Mose also went to San Agustín de la Nueva Florida, today known as Ceiba Mocha.  This area was a center of sugar production and there were a number of recently “imported” Africans already in the area, although Cuba also had a large free black population and many persons of mixed blood (and many Haitians would arrive after the Haitian rebellions). The members of the free African-descent population from Fort Mose were each given a slave of their own to help them, but conditions in the province were very difficult.  However, that area is still known as a center of Afro-Cuban culture, and quite possibly some of our long-ago former St Augustine residents are responsible for some of these cultural contributions.

Posted by Elizabeth at 9:36 AM No comments: