How fast things can change!  Two weeks ago, Armstrong Fencing loaded up its truck with the old chain link and barbed wire Tolomato fence and rode off into the sunset, after having completed the installation of a beautiful, stately looking new fence all around the back and sides of the cemetery. 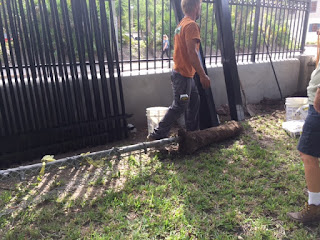 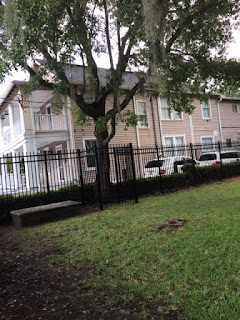 And only three days later, Hurricane Matthew hit - and part of that brand-new fence was destroyed, ironically, by a tree we had saved on the north side of the cemetery.  Its roots weakened by all of the water in the ground, the tree - top heavy from sucking up thousands of gallons of water during the flood - was shoved over by the wind, broke through the fence, and fell against two other trees in front of it. They in turn fell against the roof of the Oliveros-Papy vault, as you can see below. 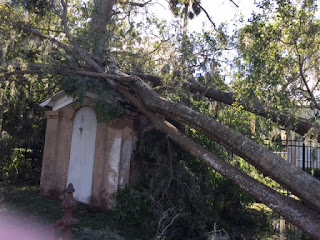 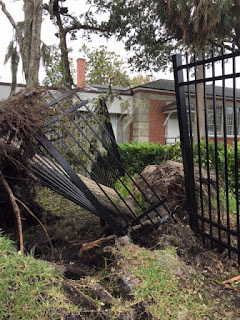 But before going into more disaster details, let's focus on the positive. As I mentioned, we completed the fencing, including the back and sides, which we didn't expect to get done until many years from now.  But only a couple of months after the completion of the front fence and gate in April, we received two very generous donations that would enable us to finish the back and side fencing. Again, with more serendipity and information from a friend of Tolomato who walks by the cemetery every day and knew we were looking for a fence company interested in this job, we found Armstrong Fencing, a Jacksonville company that had already worked on the neighboring school board buildings (formerly Ketterlinus School).

This gave us enough money to complete a couple of other jobs. Local mason Rick Hernandez, who has ancestors buried in the cemetery, had just finished work on rebuilding a partially collapsed vault and restoring the De Mier tomb, and he came back to give us a beautiful new coquina concrete entryway in front of the new gate.  No more standing in a puddle of water to get into Tolomato! 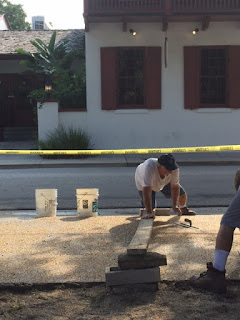 Speaking of water, he finished this job just three days before Matthew struck.  Fortunately, the cement was hardened and wasn't affected.

But a lot had happened before that, too. We went through the city's permitting process after having already voluntarily done the HARB  (Historic Architecture Review Board) process and arranging for the archaeological monitoring to be conducted on the places where the 101(!) postholes were dug.  Nothing unexpected was found, although it does appear that most of the burials must have been a few feet in from the modern boundaries of the site. 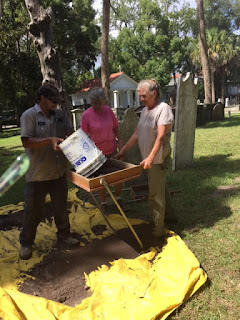 Then we had an arborist come and evaluate the trees along the side and back, since several of them were too close to the wall or another structure to permit the fence to be placed behind them, and would have to be removed or boxed.  We received permits from the city to remove those that could or should be removed - that is, they were already damaged - and at the suggestion of Armstrong, built box-outs for eleven trees that couldn't be removed or simply looked nice even in their somewhat   inconvenient locations. 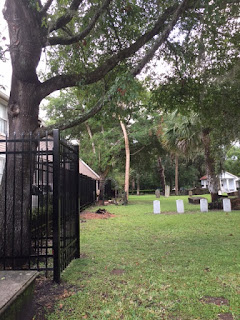 But trees can be a problem in an historic cemetery. If there has been a period of neglect, they revert to the wild.  A "volunteer" tree can grow around and "swallow" a feature, such as an iron enclosure post or even a marker. As the tree grows, it ends up dragging the feature out of the ground. 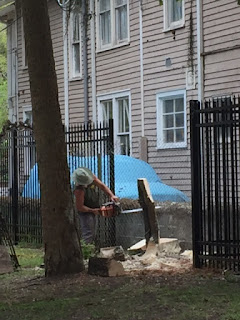 But we solved all those problems - Eddie from Tree Medic carefully carved back the offending tree, in this case, a hackleberry that had swallowed the large post of a grave enclosure. Cutting anywhere near a tree with embedded metal is very dangerous, so he had to do much of it by hand - but rescued   the enclosure post, leaving only a small piece of wood that will fall or can be chipped off. Restoration on that beautiful enclosure (we don't know the names of the "residents") will begin next year.

After some 6 days of work and monitoring, we ended up with a beautiful fence, which ties in with the existing fencing on the front but is unobtrusive while at the same time giving the cemetery a great, almost formal dignity. 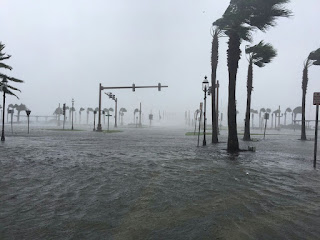 St Augustine was much more devastated than the rest of the country seems to realize, partly because we have a "keep your chin up" tradition here, since it has been devastated many times in its long history, sometimes by its enemies and sometimes by natural forces.  However, as we review the damage, and see the houses with all of their former occupants' sodden and mildewing possessions piled outside, see the demolition crews tearing out whole floors of houses, or even see people who have lost their homes altogether, we realize that this wasn't just Florida weather business as usual. 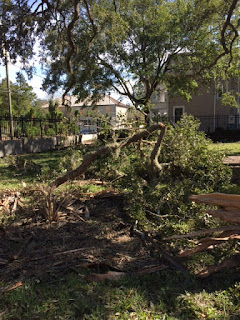 So at the cemetery, compared to other parts of town, we have little to complain about.  We lost several trees - such as the cedar tree below - and large limbs,  and part of the new fence. 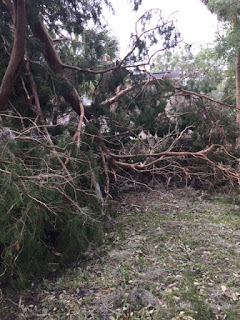 Now a possibly semi-uprooted or perhaps just water-swollen neighboring tree is pressing against and shattering the restored front wall. We'll deal with that. 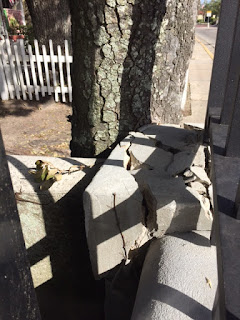 We lost one marker, but it was pretty fragile anyway. Interestingly, the volume of water in the cemetery - according to the neighbors and the high-water marks on the wall of the flooded Varela Chapel, it was about 3 feet deep - made some of the older burials collapse a bit and we suddenly saw the indentations for "lost" graves and some slightly raised and solid areas that may possibly be markers that fell over decades ago and can now be retrieved. So we'll try to bring some good out of it! 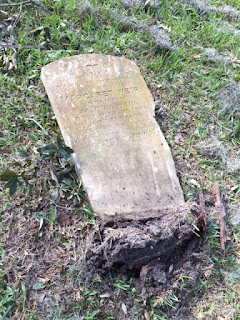 The cemetery is getting back to shape as fast as possible. Paul the painter came and sealed and painted the raw concrete wall, and landscaper Paolo and the crew came in and did a clean up, aided by the Cathedral maintenance staff.  Then Tree Medic came and started working on the huge downed trees. We're keeping an eye on the big oaks, which lost a couple of limbs but are still standing, because the water that flooded the cemetery was salt water, which is no friend of oak trees. Keep your fingers crossed that the oaks don't start dying.

Our worst loss was probably what you see below, Louise Kennedy's carefully maintained genealogical and historical records, which were submerged under three feet of water in the storage shed where they were kept.  She is trying to salvage what she can and replace the information when she can find its source, but these notebooks were the work of many years and will be hard to rebuild.  But this did give us a new priority, namely that of finding better "office space" than a plastic storage shed. 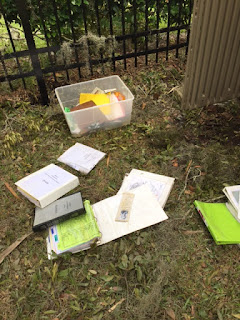 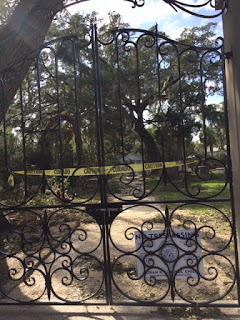 We had to cancel the Open Day because it was too wet and dangerous to enter the cemetery, and we also had to cancel a Florida Living History event that we were planning for the end of October. Many people - volunteers, reenactors, etc. - in St Augustine had their lives disrupted to the point that they wouldn't have been able to come, and some of the hotels and motels along the bay front and on Anastasia Island were flooded and damaged. But others are open and in fact some new ones were just about to open and are undamaged. And TCPA volunteers are going to do a cemetery clean-up this Saturday and it will be almost like new - or old - when we're done with it.  So if you were planning to visit St. Augustine and Tolomato, don't give up! You can find hotel space, and we at Tolomato Cemetery plan to be open in November (November 19, specifically).

So we'll be back in business soon. And we were thrilled to see this photo in the local First Coast Magazine: 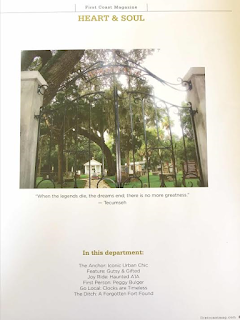 Above a somewhat elegiac caption is the Varela Chapel seen through Scott Thompson's beautiful gate. The photo was taken about a month before Matthew hit. But everything will be fine before too long and once again, Tolomato Cemetery will be the photographer's dream and the beautiful, restful space it was meant to be.
Posted by Elizabeth at 8:36 AM No comments: