This innocent looking little plant below is actually one of the worst enemies of that sturdy looking brick and mortar on which it has installed itself.  The tiny roots push their way into tiny cracks – and then start getting bigger and bigger and going deeper, until the crack itself begins to widen.  Years of untended weed growth can contribute to the eventual collapse of even the biggest and most solid looking of vaults. 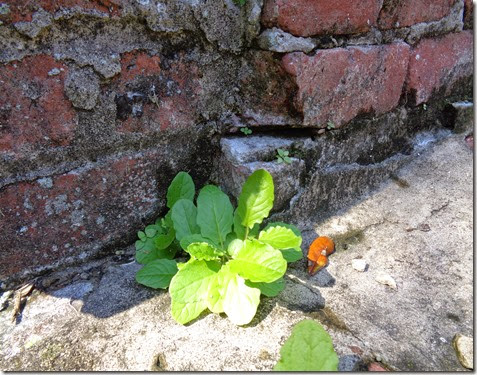 Here we see a beautiful maidenhair fern that has taken up residence in a crack -  which is rapidly filling up with ferns and being pushed apart as the plant spreads out and gets comfortable. 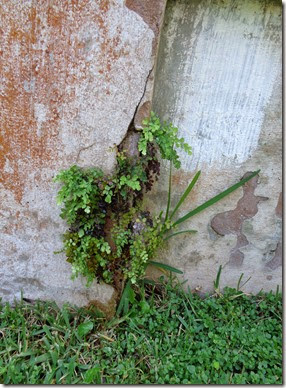 The brick vaults at Tolomato are particularly susceptible to weed attacks, since the mortar used is generally a basic lime mortar and not even as sturdy as the more modern, water-resistant Portland cement type of mortar. Rain and weather conditions weaken the mortar, and then a plant seed is fortunate enough to find a home in some little opening…and the process begins. 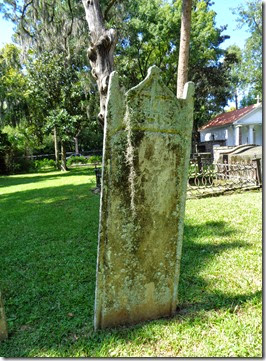 There are other kinds of plant life that can damage stone.  Above we see the stone of Father Edward Mayne, a parish priest of what is now the Cathedral, who died in 1833 after serving only a few years in St Augustine. Covering it is a mixture of moss and lichen, topped by a stray strand of Spanish moss.  (Yes, we will straighten it one of these days, but it’s going to be a big project.) 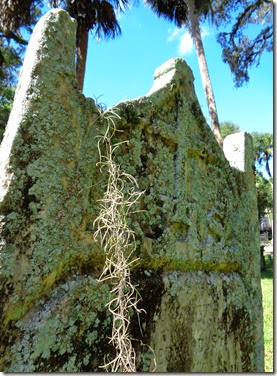 In this close up,we can see how the lichen virtually covers the surface; this is called “colonizing.” Disregard the Spanish moss, because it’s harmless. It’s a member of the bromeliad family, has no roots and is an epiphyte, a type of plant that it gets its nourishment from rain and air. On the other hand, the lichens can be destructive to inscriptions and surfaces, because they excrete acids that penetrate into the stone’s surface, possibly to aid in attaching themselves. These acids penetrate between the grains of the rock itself and speed weathering.

When we clean stones at the cemetery, we use an anti-biological, such as D2, which supposedly slows the regrowth of lichens and moss.  But they always come back, as we see happening with this stone, which was cleaned only about a year ago. 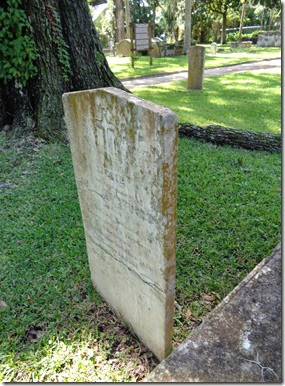 And then there are the really, really big weeds:  Self-seeded trees.  During the times when the cemetery was somewhat neglected, these trees saw their opportunity and took root. Most of the existing trees in the cemetery are probably self-seeded, but only a few of them present a problem, such as the one we see below. This tree is a hackberry tree, which commonly seeds itself in vacant lots or other untended spaces here in Florida.  As we can see, it grew up on the side of this cast iron grave enclosure…and ended up absorbing one of the posts in its growth. As it grew, it lifted the iron fence up and is still carrying it ever upwards as it grows. 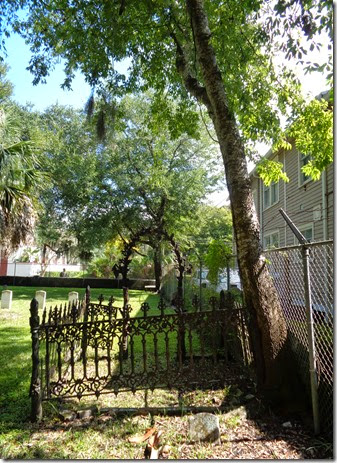 In this close up, we can see how the iron post is embedded in the tree. The solution in cases like this is often that of cutting the metal piece off and letting the tree have the section that it has engulfed, so that it doesn’t rip up the entire enclosure. In this case, however, the tree will have to be removed when the new fence is put in, so it will be cut above the top of the fence post and at its base, and then the remaining piece of trunk will be allowed to decay off over the years. 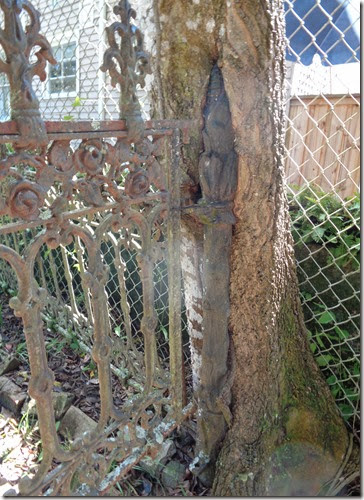 Keeping the plant world at bay is a constant struggle at Tolomato Cemetery.  In fact, when we’re open this coming weekend, October 18, one of our projects will be – you guessed it – weeding the vaults.  Weeding isn’t a very glamorous preservation task, but it is essential, and with Florida’s plant-friendly, humid, hot climate, it’s something that needs to be done constantly.  So bring your gardening gloves the next time you visit the cemetery!

Posted by Elizabeth at 12:43 PM No comments: