OK, this is the moment we’ve all been waiting for – well, perhaps not, but I certainly have been looking forward to it for some time: The visit to Pere Lachaise.

As cemetery fans know, Pere Lachaise in Paris was the first of the “garden cemeteries” that developed in the 19th century. But its origins were definitely unromantic and sanitation and health oriented, and the above photo looks bleak - but bear in mind that this was in late December in chilly Paris, so the “garden” part will look a lot better in a few months. 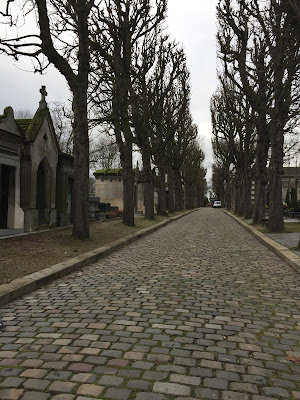 The garden cemetery movement was not an aesthetic movement, but was the result of concerns about parts of Paris that had turned into charnel pits (basically, mass graves) and as a result suffered from contaminated water and unbreathable air.  The cemetery was built on land that had belonged to a Jesuit residence where "Pere La-Chaise," a priest who had been the confessor and important advisor to Louis XVI, had once lived.  Curiously, Catholics originally were not permitted to be buried in Pere Lachaise (later English spelling)  because it was not consecrated ground, although at some point, that changed and there are now many Catholics buried in Pere Lachaise. 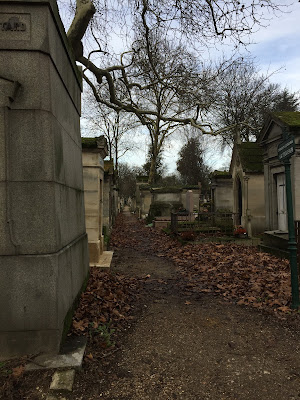 The cemetery, which opened in 1804 and sits atop a hill in the 20th Arrondissement, is a somewhat random looking place.  Outside of the walls, there are many funeral services and stores that sell headstones, urns...and the beautiful ceramic flowers below, a welcome substitute for our plastic flowers. Inside the walls, there are collapsed vaults, bizarre vaults, beautiful vaults, arrogant vaults, unassuming family vaults…and Jim Morrison and Oscar Wilde, both of whose vaults have had to be protected from their rabid fans. 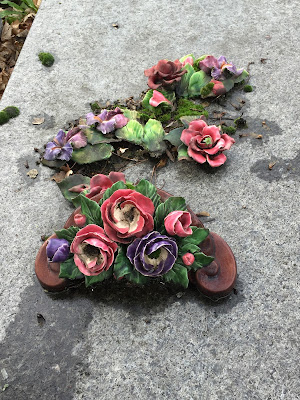 If there’s any US place I think would be similar to Pere Lachaise, it would be Oakland Cemetery in Atlanta. That is, a profusion of monuments, abundant scatterings of "grave goods" (the things people leave on or around a burial place), closely packed graves…and tours.

But our tour was quite an eccentric one, unbooked, random, and our guide, Raphael, found us rather than the reverse. However, this is the common practice with Raphael, and if you do a search of Raphael and Pere Lachaise, you’ll get a lot of results.  Below, he clutches his trusty IPad and map as he tells us the details of the monument behind him. 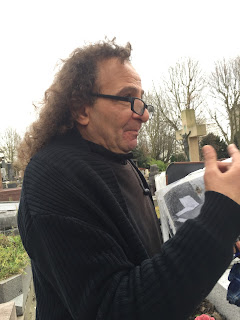 First, though, the cemetery.


The winter is perhaps not its best time, but really, any time that you’re in Paris is probably the best time. We arrived on the metro and put on our hats and scarves and gloves and went up the hill.
There is a map floating around in various places, including the cemetery’s own excellent website (which has a virtual tour), but the map’s vision and that of normal human beings appears to be a little different, and it can be hard to find the marked sites.

We wandered the cemetery, which is divided into sectors and aisles and corners, fruitlessly looking for Chopin (whose body is buried at Pere Lachaise, while his heart is buried in Poland.)  And then suddenly we heard a voice saying, “Chopin!  You are looking for Chopin?”


This was Raphael, who has been the benevolent guide-spirit of the cemetery for some 30 years.  He emerges, he finds you, takes you to see what you wanted to see and much more, and then (after a tip, of course…don’t forget the tip!) he dashes off to find other people looking for Chopin.

Here you see him zipping along a secret corridor behind the vaults, followed by one of his little flock. 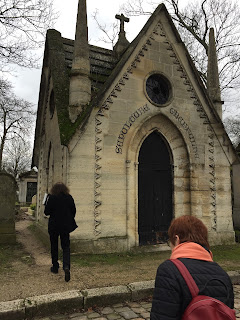 But by the end, you will have run after him at top speed and seen a lot of burial sites and heard so many real, true (he swears it!), not-ghost-stories by that time that you’ll be exhausted.
The cemetery is some 110 acres, and includes hundreds of markers, vaults, monuments and enclosures, as well as a crematory and ossuary.  It has some 100,000 burials at the moment, but as Raphael told us, “Famous? You get to stay forever. Not famous?  Ten – 20 years, whatever you have paid for and then…” thumb over the shoulder.


However, famous can have many meanings...a M. Lafitte, the inventor of the anvil, is buried at Pere Lachaise, although I didn't even realize that the anvil had an inventor. (This refers, of course, to the anvil with the rounded point for shaping horseshoes.) 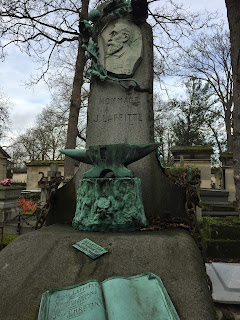 We ran between the vaults, following Raphael down narrow corridors, up leaf-covered stairs hidden behind drooping branches, and along routes that only he knew to find the people that he had determined would be of interest to us.  This did not include Jim Morrison, although I have a vague recollection of having sped past his grave at some point.
All you need to be buried at Pere Lachaise, technically, is to have been a resident of Paris at some point, or to have died there (which explains Jim Morrison).  The survivors of the deceased essentially lease the space, for ten years or more, and after this time, the remains can be removed and placed in the giant ossuary or even cremated. Along the edges of the cemetery are “Gardens of Remembrance,” which are strips of very green grass regularly sprinkled with ashes from the crematory and guarded by a sign warning people not to step on them. 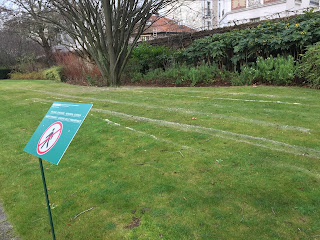 The streets and aisles of the cemetery are narrow and tightly packed. There are large family vaults with many people buried in them, but most of the features that appear to be vaults are actually just ornamental stone structures built over an underground crypt, which is generally not accessible.
The cemetery is famous for its monuments. They include the starkly realistic – the one below is a communard who died in the uprising of 1871. 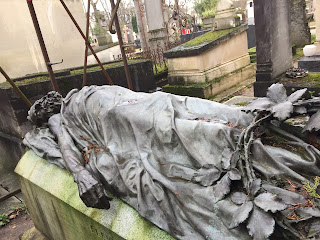 The other very realistic monument is that of a famous Parisian Lothario who was shot dead by the husband of one of his conquests and is now considered a sort of lucky fertility symbol for couples who want to have children.  At the instruction of Raphael, the embarrassed New York couple below touched both of the figure's shoes because they want twins.  There was the other visibly shiny part of the figure they had to touch, too, for the "magic" to work...which is why they appear so embarrassed. 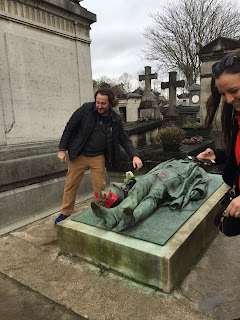 Many of the people buried at Pere Lachaise were well known in the art world or the world of performing arts.  Modigliani is buried there, and so is Delacroix – the latter with some great bronze recreations of some of his most famous paintings. 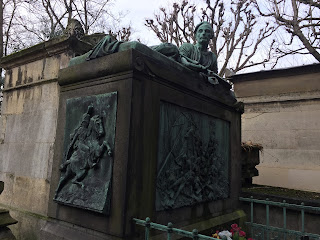 Musicians abounded. We did find Chopin, and we found a variety of other musicians, including Edit Piaf. We also found people I hadn’t thought about for years, such as Marcel Marceau, the mime who went by the name of Bip and died in 2007. He was born in Strasbourg and of course had to flee from the Nazis, lived in hiding as a member of the French Resistance...and developed his skills in their clandestine theatrical performances. 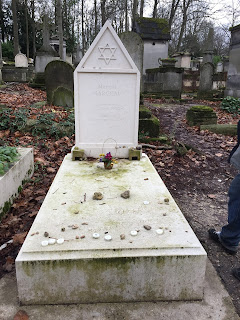 From the world of English letters we have, of course, Oscar Wilde.  His monument is protected by a large cat, one of the many that roam the cemetery. 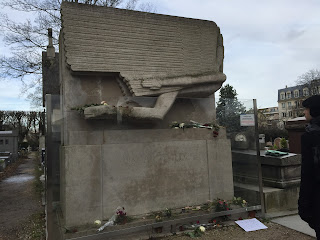 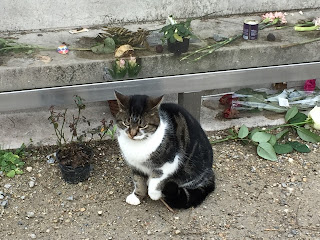 It is also protected by a plexiglass shield, because for some completely unaccountable reason, women love to kiss the marker, and the lipstick was damaging the stone. Below you can see the lipstick stains left by the more athletic women who managed to get above the plexiglass and plant their kisses next to the wonderful Sphinx carving by Jacob Epstein. 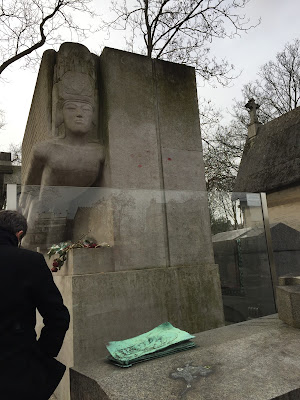 There are many Americans, including Gertrude Stein and Alice B. Toklas (both California products), whose grave is tended and decorated by Raphael, as you see below.  William Franklin, a descendant of Benjamin Franklin who died in somewhat clouded circumstances in Paris, is also buried in Pere Lachaise, and there are in fact, once you start looking, many Americans who managed to be buried there because they happened to die in Paris. 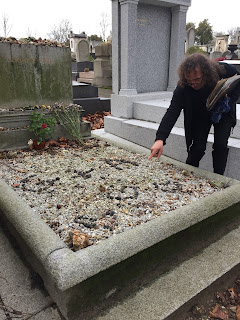 Naturally, there are politicians buried all over the place, many in very imposing mausoleums, although most of their names would now be unknown even to French citizens.  Napoleon had wanted to be buried there, but actually got his very own – well, calling it a mausoleum would be seriously understating it. Perhaps temple would be a better word: below you see his ornamental casket at Les Invalides, several miles away, where the rotunda is graced by many statues of Napoleon in a god-like form. 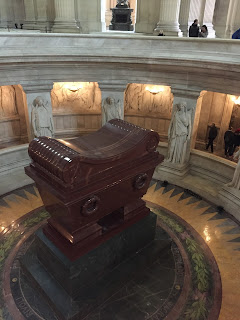 But if you're not Napoleon, the cemetery accepts burials of persons of all religions or none at all, but one thing that was almost surprising was the profusion of Jewish burials.  There are various Rothschilds buried there, although some were moved to Israel long ago, and many burials of other Jewish public figures or people important in the business world.
But there was one particularly striking area of the cemetery that I had never read about: the Holocaust monuments. The various concentration camps to which French Jews were deported are marked, each one with its own monument, and there is also a monument specifically for the children who were taken from Paris to these camps and never returned. 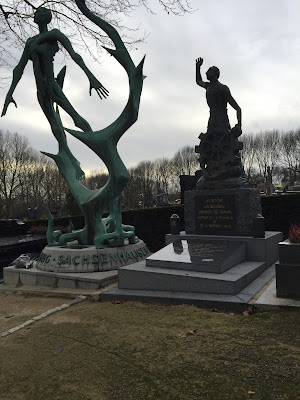 There are also monuments that suddenly call the viewer back to the difficult present.  The young woman below died in the terrorist attack on the Bataclan nightclub in 2015. 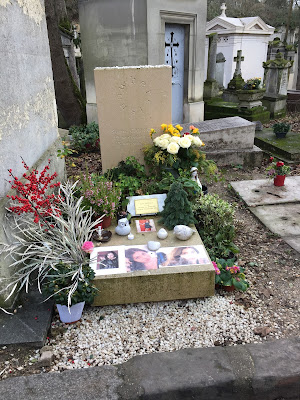 And the young man was one of the writers for the French satirical magazine, Charlie Hebdo, who died in the terrorist attack on the magazine’s offices, also in 2015. 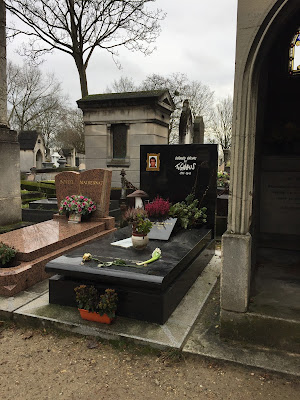 The day was very cold, windy and occasionally rainy, and after a couple of hours, we called it quits, went off to have a glass of wine and a croque monsieur in a warm neighborhood café, and then ended up at Sacre Coeur, viewing the remarkable mosaics. When last seen, Raphael was bounding off to find more people looking for Chopin. 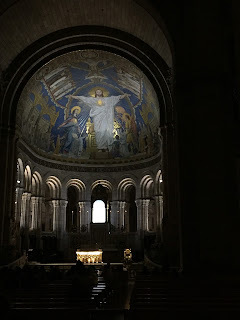 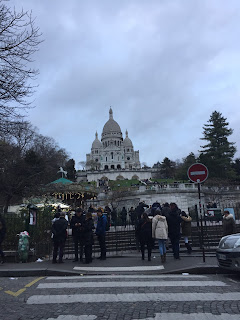