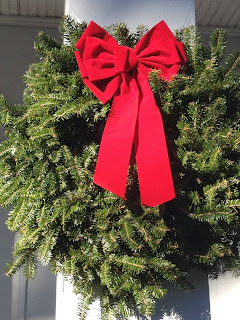 This year, thanks to a suggestion from TCPA member Buff Gordon, we decided to decorate for the holidays.  We went to a local Christmas tree lot and got two lovely real fir-branch wreaths, which we hung with nylon fishing line and which so far have remained hanging through some very rough weather!  Knock wood... 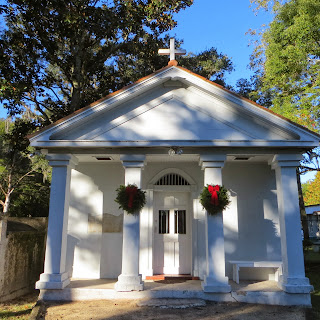 The weather today was beautiful clear winter weather, however, and the cemetery was at its most beautiful.  I went out to take a photo of the wreaths for this blog and spent the morning snapping various scenes, although I am certainly not a great photographer, alas.  But little details stood out in the bright sun. Below is the trefoil Chi-Rho symbol on the vault of Fr. Miguel O'Reilly (d. 1812), reflecting the trees in the little pool of rainwater that always collects in it. 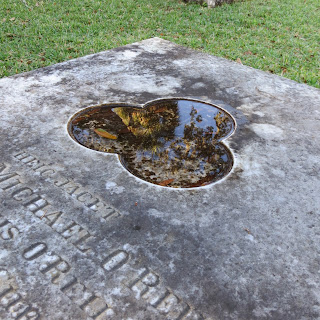 During my photographic excursion, our resident fish-hawk, seen here against the almost unreal blue sky, watched me like...well, like a hawk. 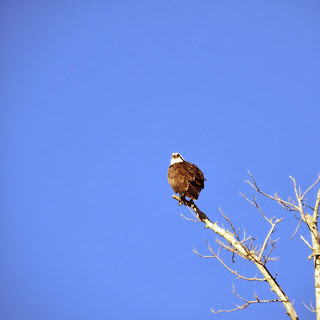 Tolomato Cemetery will be open this Saturday, December 21, from 11-3, for visits and tours.  It's supposed to be another nice, clear day, and all photographers are hereby reminded to bring their cameras! 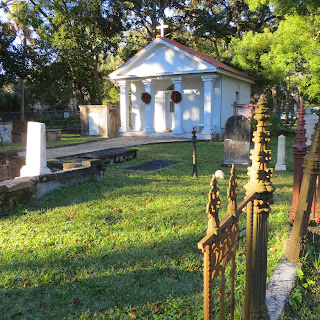 Last week, we had a visit from a large group from Miami, members of the Asamblea Provincial de La Habana, a group of Cubans living in the US who are very devoted to the city of their birth, Havana.  The city of St Augustine was closely connected to the city of Havana throughout most of its early centuries, and Cubans have a special feeling about St Augustine.  Despite the cold and gloomy weather, their excitement about being in St Augustine – and especially at Tolomato - shone through. 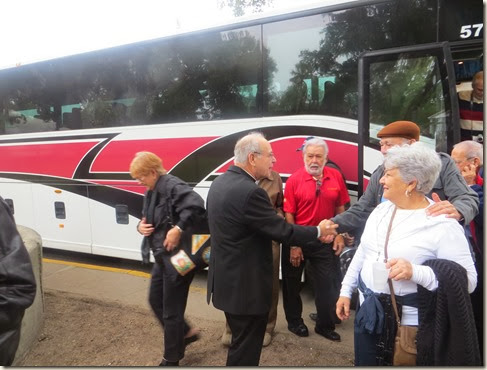 Added to this is the fact that the current bishop of St Augustine, Bishop Felipe Estevez, was born in Havana and spent his childhood there.  Before it became a diocese, St. Augustine was administered by the bishops of Santiago de Cuba and then Havana, but this is the first time since becoming a diocese in 1870 that the town has had a Cuban-born bishop, so this made the visit even more special.  Above we see the bishop greeting the Cuban delegation as they arrive.  Docents Louise Kennedy, Pat Kenney, Mary Jane Ballou and Elizabeth Gessner were also on hand to welcome the group and show them around the cemetery. 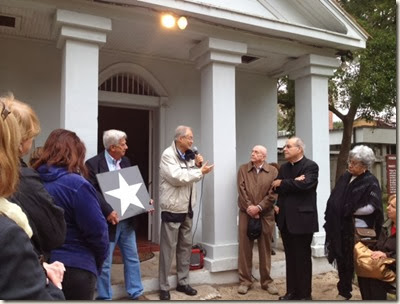 The purpose of this visit was to install the star commemorating the place where the Cuban liberator Jose Marti knelt to pay his respects at the tomb of Fr. Felix Varela, regarded by Cubans as one of the intellectual heroes of Cuban independence.  His writings on freedom of conscience and political freedom were crucial to the 19th century independence movement, and while Cuba has had some significant problems since that time, Fr. Varela has remained a Cuban hero. He is also greatly respected in modern Cuba for his educational theories. 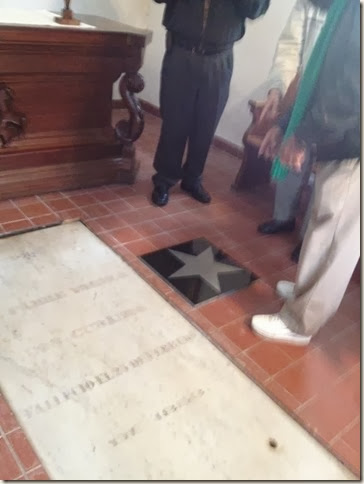 The star on its accompanying granite base will be installed in the floor near the crypt where Fr. Varela was buried. His remains were moved to Cuba in 1911, but the place is still significant. In fact, the plaque could not be placed permanently because we are in the process of restoring the ledger stone, which was damaged after having been hung on the wall for decades after Bishop Verot was also buried in the crypt in 1876.  The area around the crypt opening will be repaired with marble and the stone itself will be cleaned and reset, and then the Marti star will be installed permanently. 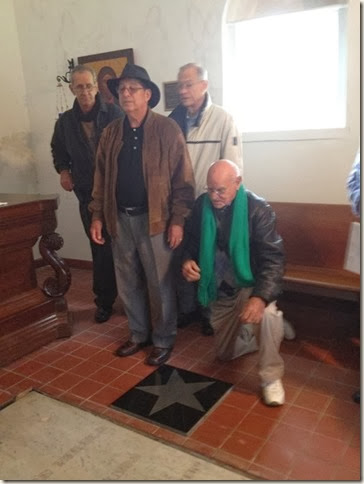 But in the meantime, we had a wonderful visit from this warm, enthusiastic group of people who are among the many who find their roots and connections at Tolomato Cemetery.

Posted by Elizabeth at 11:22 AM No comments: