We have set up a research table at the southwest corner of the Varela Chapel to aid in genealogy searches on our Third Saturday open days. Tolomato is the final resting place for many St. Augustine residents, about 1,000 of whom are buried there. While there are only about 105 markers remaining, they are visible lessons in history with a wealth of information to share about the people that are buried there. Your ancestor’s tombstone may be the only physical evidence of the life he or she has lived, and the information on it is important in tracing the story.

Below, Nick McAuliffe takes a group on a tour. 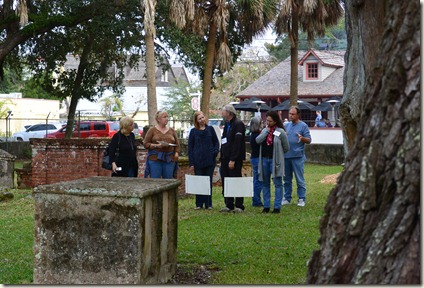 In addition to the transcriptions of inscriptions of the markers, we have information about those people whose graves have no markers. Many visitors come with genealogy questions, and we now have copies of the Cathedral Parish Records, the St. Johns County Death Records, and a map of our cemetery available to help them. We also have a copy of Matthew Kear’s thesis, In Reverence: A Plan for the Preservation of Tolomato Cemetery, St. Augustine, Florida, which established a framework for the Tolomato Preservation Project and provides detailed information on the cemetery. We are adding new material to our research collection as we find it. I am at the desk and ready and eager to help visitors every Third Saturday. 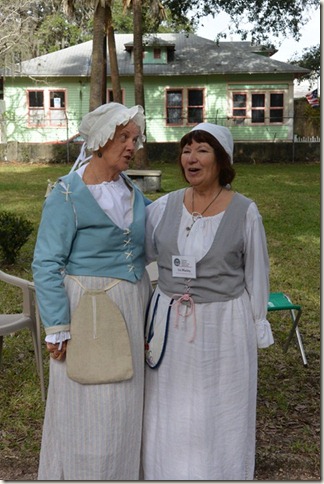 Posted by Elizabeth at 1:50 PM No comments:

I think that I shall never see…

….A poem lovely as a tree. If you didn’t have to learn this when you were in 4th grade, I can tell you it’s a poem written long ago by the poet Joyce Kilmer (he died in WWI) and was so popular it was even put to music.  However, there’s a negative side to trees.

When they grow up in untended cemeteries or any untended space, trees are an inexorable force that can take over. At Tolomato, there are many trees that have simply rooted themselves over the years, decades and centuries, and are now ripping up grave enclosures, toppling markers, and generally misbehaving.  In our last post, you probably read about the tree that took over Hector Adams’ marker, but that tree is only one of many.

Now we’re trying to prevent this. Just yesterday, a company hired by the Cathedral Basilica came in and took out our most menacing tree, a huge sugarberry that was completely hollow inside and dead everywhere except one little streak of living wood that ran up on the west side and nourished a branch or two. Branches dropped off every time there was rain or wind, and we actually did not open the cemetery last month because it was windy and we were worried about the risk to the public. 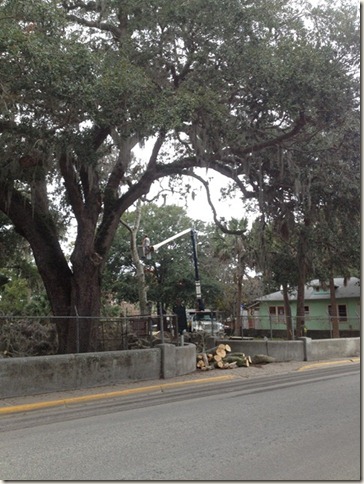 The sugarberry, or hackberry, is a member of the elm family and can be a pretty tree, but is considered a “trash tree” in Florida because of its rapid self-seeding and aggressive growth. It secretes a sticky dew that damages the surface of anything under it and also produces a small purple berry that birds love.  But after they’ve eaten it, watch out! Many of our markers in that area are stained from the sugarberry-eating birds.

The sugarberry is actually rather fragile and can start to die from any injury. This specimen did not appear to have any injuries, but perhaps it had lost branches in a storm or something had enabled infection to enter. In any case, it was nearly completely hollow, both in the trunk and the main limbs, and removing it was the only thing that could be done.  So now we have a mound of chips. 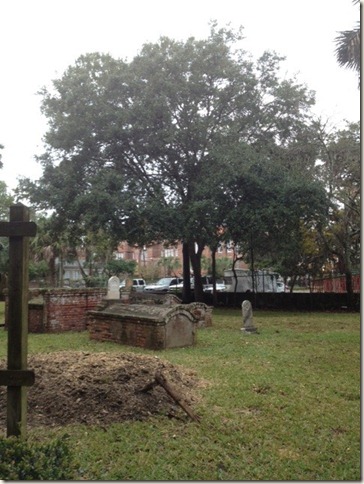 We will probably plant an upright tree to take its place. An upright tree such as the long-lived sabal palm or the red cedar was suggested. Both of them already exist at Tolomato, and in fact the same job took out the remains of a red cedar that had been dead for years but was being held up by the neighboring palm tree, as you can see below. 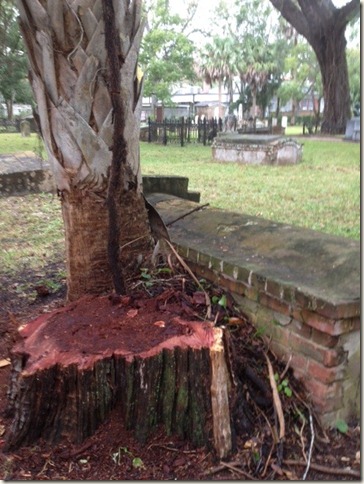 We will begin to look at our tree options. In any case, the arborist told us not to worry. Now that now that the sugarberry is gone, the two oak trees – the big one by the gate and the younger one along the north fence - will begin to reach towards the sun and each other and fill in that space.

Posted by Elizabeth at 6:30 PM No comments: