The Varela Chapel Amid Stormy Seas 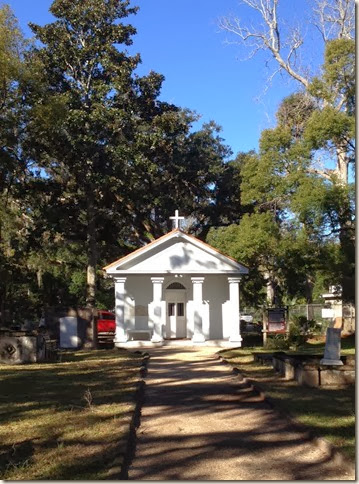 Our humble, peaceful Varela Chapel was shown in a different light in 1853, the year of the death of Fr. Varela. 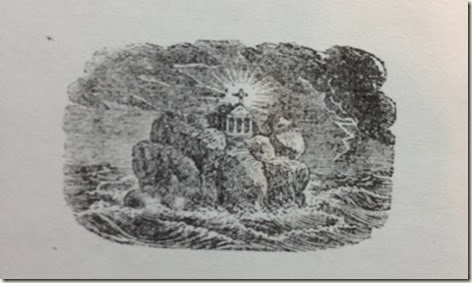 We have been doing research on the chapel and its building, and came across a pamphlet published for the dedication of the cornerstone on March 22, 1853, less than a month after the death of Fr. Varela (February 25, 1853). The money for the building of the chapel had originally been collected by his Cuban friends to get medical treatment and more comfort for him while he was living in the little wooden room behind the schoolhouse next to the current Cathedral. But when they arrived with the money, they found that he had died only a few days earlier.

So they immediately decided to build a mausoleum and funeral chapel, since Fr. Varela himself had often regretted the fact that the cemetery had no chapel at that time and had unsuccessfully urged that one be built.  The chapel was speedily designed by a local builder, in consultation with the Cubans, making a conscious effort to keep it simple and unpretentious and in keeping with Fr. Varela’s life.  His friends felt they were fulfilling a wish of his, as well as providing a dignified final resting place for him. 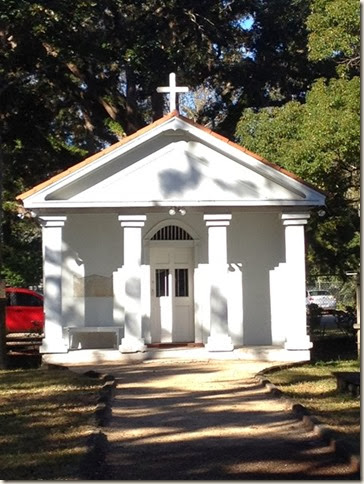 The dedication was conducted by the parish priest, the French Fr. Edmond Aubril, and attended by a priest representing the Archdiocese of New York and a priest representing the Diocese of Savannah, since Fr. Varela had spent nearly 30 years working in New York City and was the Vicar General of New York, while St Augustine at that time was not a diocese but was under the Diocese of Savannah.  It was also attended by the church wardens, the children from the parish school, and large number of local citizens. A contemporary account states that “the deep feeling which pervaded the spectators might have been observed from the tears and sobs of the many who knew so well, and love so tenderly, the good Father Varela.” 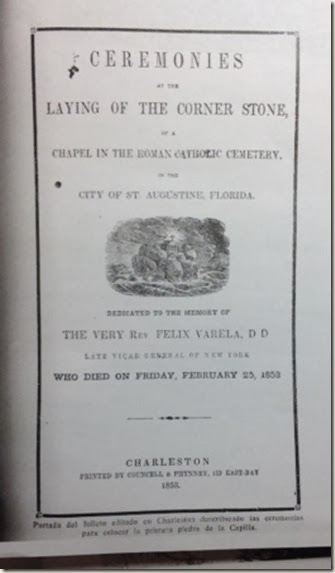 The addresses and homilies that were delivered – in Spanish and English - at the dedication were sealed into a metal box and placed in the cornerstone, where we may assume that they remain to this very day.

Posted by Elizabeth at 7:43 AM No comments:

The Ermita of Tolomato

The 18th century maps we call upon for much of our knowledge of the layout of St Augustine, including the location of the “Pueblo de Indios de Tolomato,” the Indian Village at Tolomato, often label the building there as an “ermita.”  In fact, the word “ermita” turns up all over our early maps.  Below is the description from the 1763 de la Puente Map of the “Ermita de Piedra” at Tolomato. It is often translated “hermitage,” but was it?  Were there really hermits scattered all over early St Augustine?

Highly unlikely, since the word “ermita” had by then come to mean simply a chapel usually located in some place outside of town to make religious services more available to the population that lived around there, or occasionally to house a shrine and be the focus for particular devotions.   Usually an ermita did not have a resident priest, and was often served not by the priest of the nearest parish, but by a member of a nearby religious order.   In the case of the ermitas in St Augustine, this would have meant a Franciscan from the Convento de San Francisco, now the St. Francis Barracks. 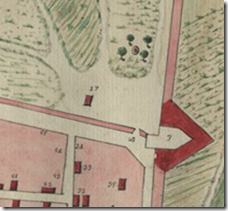 Above we see the depiction of the ermita at Tolomato on the 1763 map.  The chapels that were built for the Indian towns or missions were often referred to as “ermitas” on the maps, although an “ermita” back in the Old World generally did not provide full parochial services (such as baptisms, funeral masses,  etc.). However, we can assume that the mission chapels did so. Tolomato had a doctrinario, that is, a friar who was the regular spiritual shepherd of the little group of mostly Guale Indians, and thus Tolomato must have been considered a doctrina, or a settled Christian Indian village with regular instruction, prayers, and religious activities.  A doctrina often had a resident priest, although in the case of Tolomato, since the Convento was so close, we don’t know whether the friars actually lived in the village or not.

But what was the origin of the “ermita” as a concept?  A couple of years ago, spending time in La Rioja, the winegrowing region of Northern Spain, I saw this in action.  In the photo below is a bluff filled with caves, which were very probably what the first ermitas looked like. Except that there would have been a genuine hermit living there, descending from his cave only occasionally to get water or food and once in a while, to attend prayers with the other hermits who had settled in the area. 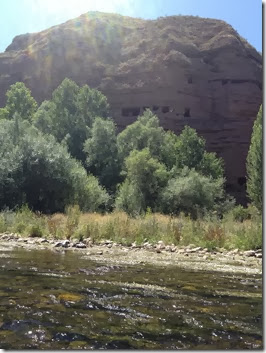 Monasticism came to Spain very early, from the deserts of Egypt, and early monasticism was “eremitical,” that is, based on a collection of hermits living in some proximity but not really having a community life.  The word “eremitical” comes from the Greek word erēmia, “desert,”  and the English words “hermit” and “hermitage” refer to this tradition of living alone in the desert.  Below we see the cave of San Millán, a 6th century hermit in La Rioja. 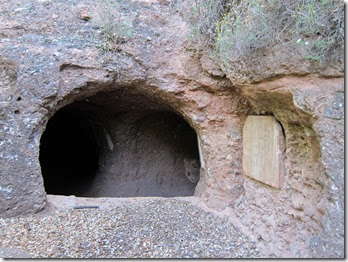 But as time went by, the hermits began to develop a more regular community life and community prayer.  Rules were written to govern their lives together, with one of the very first ones being the Rule of St Augustine, written by St Augustine in the 5th century.  As more hermits accepted the rule, they built permanent structures, such as the building we see below, San Millán de Suso (the “upper” San Millan), built high on the mountain next to the hermit’s then abandoned cave. 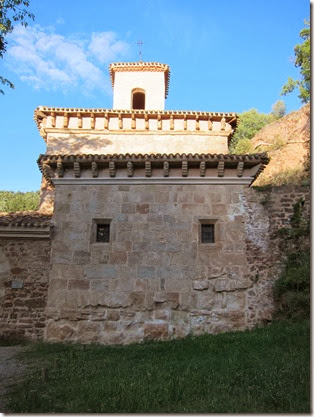 Eventually, they built huge monasteries to accommodate hundreds of monks for a cycle of regular prayers, chant and study.  Below is San Millán de Yuso, the “lower” San Millán , built down in the valley when the group of hermits turned into a “cenobitical” community, a term coming from the Greek words meaning “common life.” 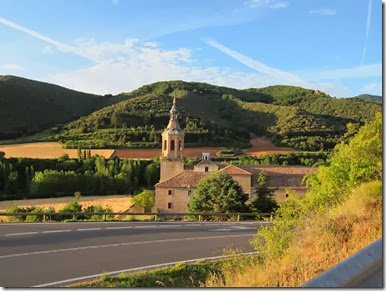 And of course, towns grew around the monasteries.  This photo shows us the town cemetery. 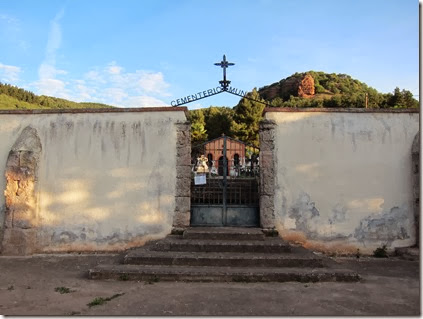 So we can see that the ermitas of San Agustin were far removed from the origins of the term.  And now we generally translate the word as chapel or even church, which was how the structures at the mission village sites were described by the English when they in turn began to make their maps of Florida after their installation in 1764.