Memorial Day is approaching, so this seemed like a timely moment to find some new Tolomato connections.  As we all know – well, those of us old enough to know it – Memorial Day was originally on May 30 and was often referred to by real “old timers” as Decoration Day.  Now it’s another Monday holiday, and nobody even remembers Decoration Day.
But even if you remember the term, you may not know its origin.  A glance at our old friend Wikipedia, however, will tell you that it began in 1865 in Charleston, SC, although as usual, there is some dispute over this and there are many other suggestions as to its origin. But as with most things, it probably had several points of origin. 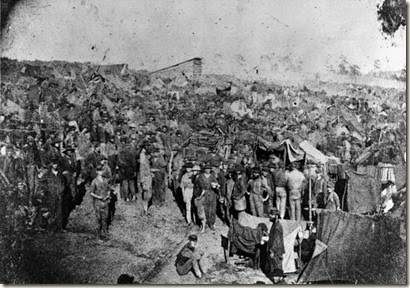 This particular source tells us that in 1865, the year in which Lincoln was killed only a few days after the formal ending of the Civil War, some of the Freedmen, African Americans who had been freed during the war, decided to honor the 275 Union soldiers who had died during imprisonment at a Charleston racetrack used by the Confederate Army as a prison.  Above we see a photo of the famous prison at Andersonville, where some 13,000 Union Army prisoners died.  St. Augustine’s first bishop, Bishop Agustin Verot, who is buried at Tolomato Cemetery (photo below), used to visit the prisoners at Andersonville when he was the Bishop of Savannah, bringing them spiritual attention and also attempting to improve their conditions. 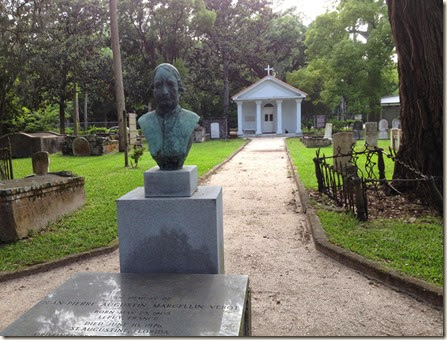 May Day, the first day of May, had long been celebrated and was still celebrated among the English and their heirs, the British settlers who founded Charleston.  But that year, to commemorate the death of Lincoln in April of 1865, the Freedmen held a special ceremony to honor those who had died at the racetrack-prison in Charleston, planting flowers, building a memorial arch, and having speeches and music. 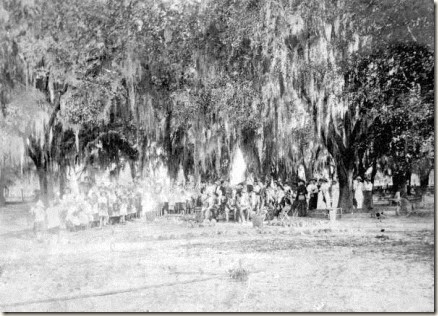 It was repeated in following years, and then this and similar Civil War commemorations were renamed “Memorial Day,” with the new date being May 30. The holiday was officially proclaimed on May 5, 1868 by General John Logan, national commander of the Grand Army of the Republic.  The first official observance was May 30, 1868 when flowers were placed on the graves of Union and Confederate soldiers at Arlington National Cemetery.   But it became a popular celebration as well, as we see above in the photo of Memorial Day activities at the town cemetery in Micanopy, Florida in 1911.
For many, many years, among Protestant Americans, it remained a day to visit cemeteries where ancestors were buried, have picnics there, clean and decorate the graves, and in general commemorate the dead.  Catholics had other traditional days for these activities, but since a large number of the Union dead were Irish Catholics, drafted in the Northeast cities, they certainly took part in Memorial Day activities as well. The holiday became a day for honoring all military service veterans of all US wars, particularly those who had died in the wars, and is still marked by patriotic parades and the placing of flags on military graves, although it appears that family visits to cemeteries are no longer as much of a feature of the day.  Below we see a photo from the St Augustine Record of Memorial Day at the St Augustine National Cemetery. By the way, this is always celebrated at the National Cemetery on Memorial Day at 10:00 am, so if you’re in town that day, plan on attending! 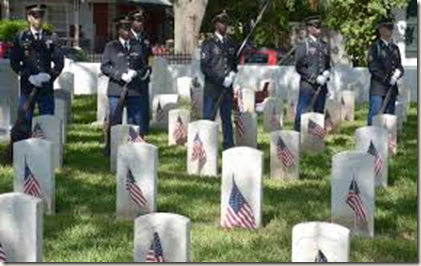 Tolomato Cemetery has the graves of two Freedmen: Hector Adams and Frank Papy, both of whom signed up with the U.S.C.T. (US Colored Troops) in Fernandina Beach and served in Florida.  The USCT were Union Army units formed for the recently emancipated African Americans, and many St Augustine men signed up;  while these two are buried at Tolomato, several others are buried at the Mission.  You may remember that Tolomato volunteers, shown below, straightened and repaired the marker of Hector Adams a couple of years ago.  These two veterans buried at Tolomato died in the late 1870s, shortly before the cemetery closed, and their deaths were unrelated to the Civil War.  Adams was a teamster, or wagon driver, and Papy was a waiter. Interestingly, their regiment, the 21st, was from South Carolina. 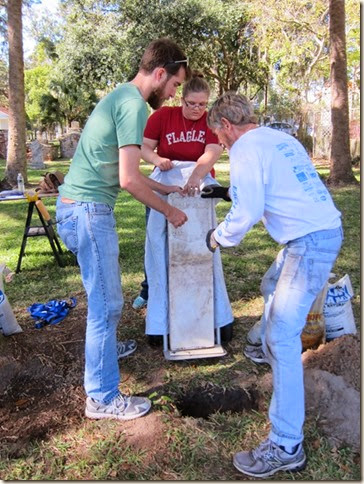 Were they involved in any way in Decoration Day in Charleston?  Probably not, but this shows you the connections, both through time and geography, that thread through St Augustine.  And here are our other military markers, the markers for Confederate veterans. We’ll be open this coming Saturday, May 17 – and since it’s as close as we can get to Memorial Day, we’ll  be placing flags on the graves of both the Freedmen and the Confederate veterans, just as was done some 150 years ago at the first official Decoration Day. 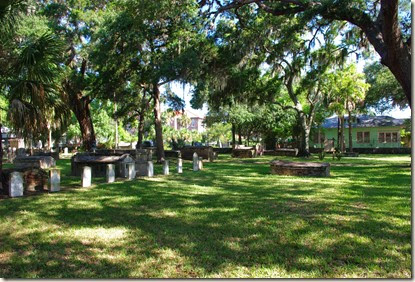 Posted by Elizabeth at 4:15 PM No comments: