When we discuss the Minorcan arrival on our Tolomato Cemetery tours, most people’s first question is: Where…or even what…is Minorca?

As well all know, it’s an island in the Mediterranean several hours by ferry off the coast of Barcelona, and is one of the several islands that form what are known in English as the Balearics (Baleares, in Spanish). Mallorca and Ibiza, both party-hearty resort areas, are the other major islands in this group. Menorca means, literally, “smaller,” and in fact it’s only 271 miles square.

The name of the island is spelled “Minorca” by English speakers, and “Menorca” by Spanish and Catalan speakers. In the 18th century, at the time of St Augustine’s Minorcan immigration, most of the largely rural population was composed of Catalan speakers, although the more educated Minorcans also spoke Spanish.

Also in the 18th century, Minorca spent several years under the British, who got it the same way they obtained St Augustine: the settlement of the French and Indian or Seven Years War. And the fact that it was British at that time is exactly why Dr. Turnbull chose it as his possible source of workers for his New Smyrna Beach indigo plantation.

And now to the Tolomato angle. A couple of weeks ago, we had a special event for the presentation of Buff Gordon’s new book, Walking St Augustine. It was a fundraiser for the cemetery fence, and we did quite well, thanks to all of you who attended! 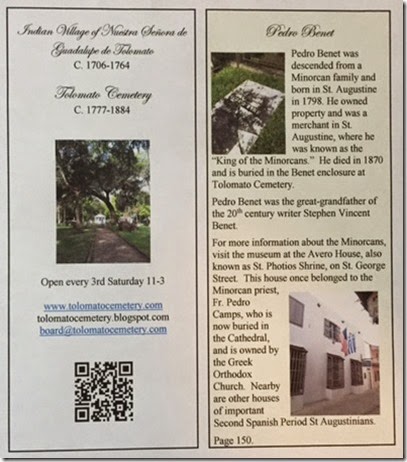 But on a more scholarly note, we also prepared some special mini-tours related to the book. We created bookmarks for 3 people buried at the cemetery: Fr. Miguel O’Reilly, Mary Darling, and Pedro Benet. The bookmarks cross-referenced the book, and visitors could take the bookmarks and go on to seek the location related to that person.  Above is the bookmark for Pedro Benet, who we chose to represent the Minorcans.

The bookmarks included the O’Reilly House, the Oldest Schoolhouse, and St. Photios Shrine, which was once the home of the Minorcan priest, Fr. Pedro Camps.  Below we see the tomb of Fr. Miguel O’Reilly, the St. Photios Shrine, and the grave marker of Mary Darling.

Our members did a lot of research. Brooke Radaker collated the personages with their locations, Louise Kennedy created a time line for Fr Miguel O’Reilly (more about that some other day), and Nick McAuliffe did a truly exhaustive job on Pedro Benet. 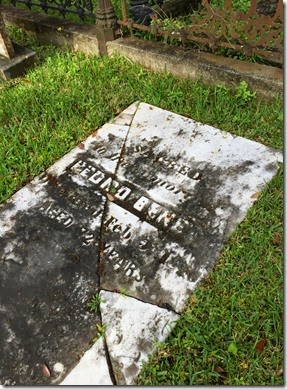 Although he was known in his day, which was the early 19th century, as the “King of the Minorcans,” Pedro Benet was a different kind of Minorcan. In St Augustine, when you say “Minorcan,” you are referring to descendants of the people brought here by Turnbull in 1765. But they were not all Minorcans, strictly speaking, because some were from Italy, particularly Sicily and Sardinia, and others were from Greece. Turnbull’s wife was Greek, and the Mediterranean voyage was her idea because she thought that Greeks and others from the region could tolerate the heat better than the usual English or Irish laborers.

However, Pedro Benet’s family actually came in at a different moment, and they came directly from Minorca and had nothing to do with Dr. Turnbull. Pedro Benet’s grandfather, Esteban, was the first to appear in St Augustine, and arrived around 1785, some 8 years after the New Smyrna Beach Minorcan march to St Augustine.  He married a Hernandez, a member of one of the few Spanish families to remain in Florida during the British Period.

Below is a drawing of Pedro Benet that Nick found in his researches. 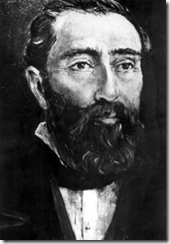 On this basis, Nick developed a very detailed history for the family, which was a very important one in Florida history, and included many people active in government and public affairs in Florida. It also included Stephen Vincent Benet…the first Florida graduate of West Point.

And it includes the Stephen Vincent Benet who probably first came to your mind, his grandson, born not in St Augustine but in Pennsylvania, the writer who gave us John Brown’s Body, the wonderful poem American Names, and my childhood favorite short story, The Devil and Daniel Webster. Anybody who remembers the soul of Jabez Stone fluttering in the handkerchief will know where the inspiration for the 1950s movie “The Fly” came from…although I’m still not sure why the story was  my favorite!

Nick collected wonderful information, and we are currently looking for a way to store all of our information on line so that it can be accessed easily by anyone. However, since we don’t have the archive yet, let me post the truly excellent genealogical chart that Nick drew up, which traces the branch of the Benet family that produced Stephen Vincent Benet and his literary siblings: 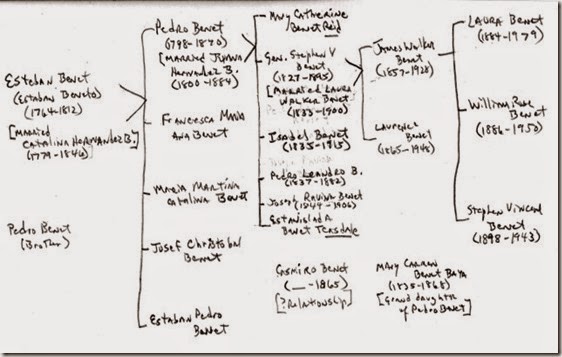 And now let’s get back to “Minorcan” in the St Augustine sense of the word.

The reason Tolomato came back into use as a cemetery, after its initial period as an Indian village which had its own church and probably its own cemetery, was because the British governor Patrick Tonyn allowed Fr. Pedro Camps (his statue in the Cathedral courtyard can be seen below) and his band of Minorcans to use it as a cemetery after they arrived in St Augustine on their flight from the New Smyrna Beach indigo plantation. 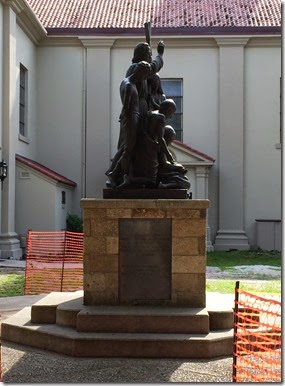 When the Spanish returned, it became the parish cemetery for what is now the Cathedral, but the great majority of the people buried there are descendants of this first group of Minorcans (including Greeks and Italians) who arrived in St Augustine after rebelling against Dr. Turnbull. So St Augustine Minorcan names can be very varied, ranging from the pure Catalan name Camps to the Anglicized Masters (Mestres, in Catalan), and including some that are clearly of Italian origin and some that are of Greek origin. And these people, many of whom married into the few Spanish families that stayed in Florida during the British period, such as the Hernandez family, the Sanchez family and the Solanas, are the foundation of our modern city.

So it was very fitting that members of the TCPA board went to Menorcan Society president Carol Lopez Bradshaw’s house to receive the generous $5,000 pledge that the Menorcan Society had made to the cemetery fence fund project. Carol is descended from several Minorcan families, as are the other members, and they worked hard at their festivals and events over the past year to collect this pledge. The highlight of the last St Ambrose Festival – many Minorcans live in that rural parish – was the raffle of a Minorcan cast net, made in the traditional style by a local Minorcan craftsman, for the benefit of the cemetery fund. 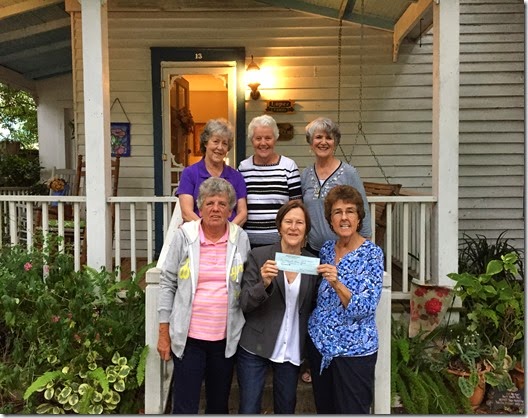 Many, many thanks to the Minorcan Society! And our readers are getting a heads-up: there will be a special event in November commemorating the Minorcan March to St Augustine from New Smyrna Beach. You’re the first to know, and details will come out in the next couple of months, so keep watching!