The 450th Anniversary At Tolomato Cemetery

As everyone knows, Tolomato Cemetery was first an Indian mission, La Natividad de Nuestra Señora de Guadalupe de Tolomato, established by the Franciscans in the early 18th century to shelter the refugee Indians fleeing the British attacks on the mission chain in other parts of Florida. However, the first mission of that name was originally located in South Georgia  - Tolomato was a place name - and was one of the earliest missions founded after the arrival of the Spanish. 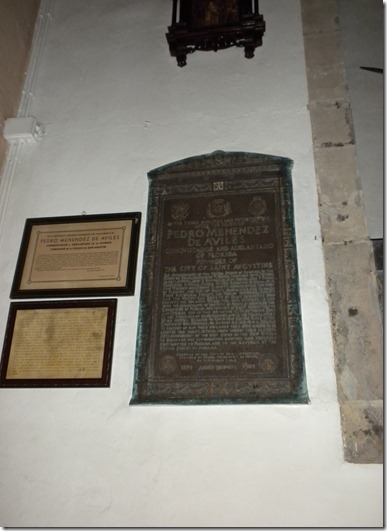 In fact, as you can see from the above plaque that is in the Spanish burial place of St Augustine’s founder, the Adelantado Pedro Menéndez de Avilés, the name of the mission reflected the founding of St Augustine.  The Spanish title, which translates as the “Nativity of Our Lady,” was given to commemorate the Catholic feast day when Menéndez formally landed, September 8 – the feast of the Birth of the Virgin. It was on this date that Menéndez was rowed up to the shore somewhere in the vicinity of the current Fountain of Youth and the Mission Shrine for the celebration of mass by the expedition’s chaplain, Padre Francisco López Mendoza de Grajales,  The mission in St Augustine that was located on that spot was, of course, Misión Nombre de Dios (Name of God), since Menéndez claimed the land “In the Name of God”, and subject to the Spanish Crown.  The land is still known by that name, although the mission is long gone and the only traces of the 17th century stone church on that site are parts of the floor uncovered in an archaeological dig last year.

So while Tolomato Cemetery is much later than our founding…the cemetery is “only” some 238 years old, having entered into use as a cemetery in 1777…we have a connection with that anniversary through the original founding date of St Augustine and the original name of the cemetery property. 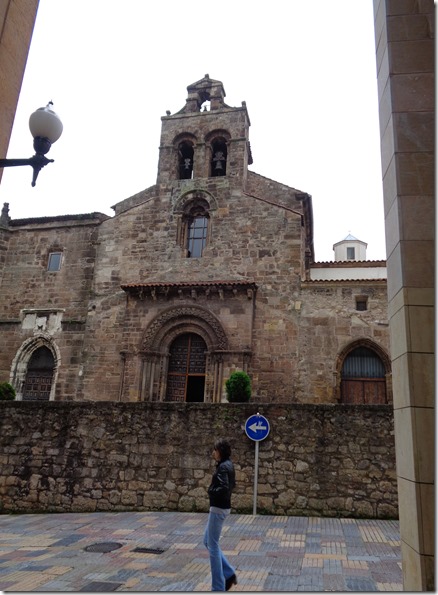 As for his own burial, Pedro Menéndez is buried in Spain, where he died of typhus in 1574 while preparing the Armada to set sail for Flanders. Above is the church where he is currently buried, the Parish Church of St Nicholas, la Parroquia de San Nicolás, now staffed by the Franciscans. He was born in the neighborhood and baptized in the parish, and it was his last wish to be buried there. However, it took a long time for this to happen, since he died in another Northern Spanish city, Santander, and it was years before his body was returned to Avilés. A look at the rocks below, off coast of Aviles and the scene of hundreds of shipwrecks, will show you something about the conditions mariners faced on what is known in English as the Bay of Biscay. 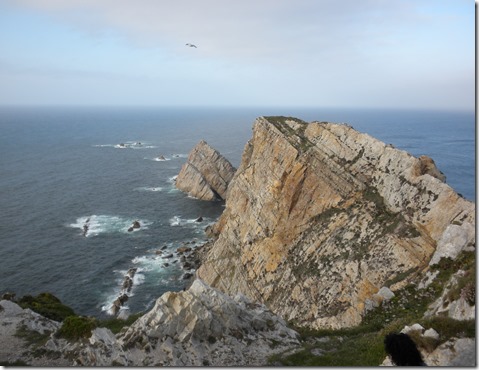 Even then the posthumous travels of Menéndez were not over, because his body was moved several times subsequently for reasons ranging from a roof leak in the parish church to fears of desecration of his grave by hostile forces during the Spanish Civil War. 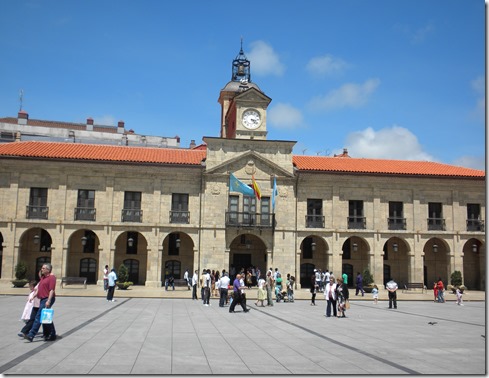 Even more confusingly, both of the Avilés churches in which his body reposed – the original parish church and another church about a half mile away off the Plaza Mayor of Avilés, which is shown above – were at one time or another known as San Nicolás and both of them were at one time or another staffed by Franciscans. So sometimes it’s a little difficult to sort out this complicated story! 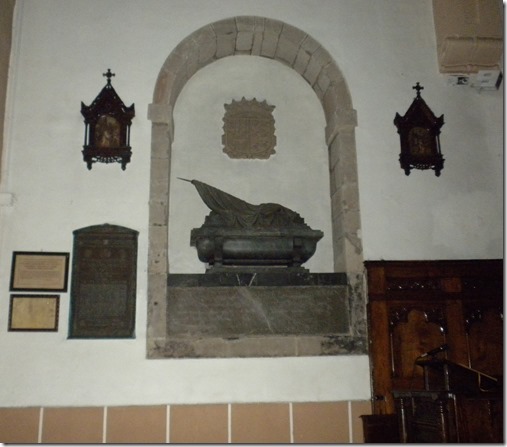 However, in 1924, the remains of  the Adelantado Pedro Menéndez were placed in this carved marble urn, which in turn was placed in a niche high up on the wall near the pulpit, as you can see above. It remained there until it was removed and hidden during the Spanish Civil War in the 1930s. It was not immediately found again after the war, and it was only in the 1960s that it was moved back into the 1924 location, which is where it remains to this day.

The original casket was given by Avilés to the City of St Augustine in 1924 as a gesture of international friendship, and may be now seen in the museum at the Mission.  Notice the little ship model in the bell tower of the Avilés City Hall (Ayuntamiento) also commemorating this. 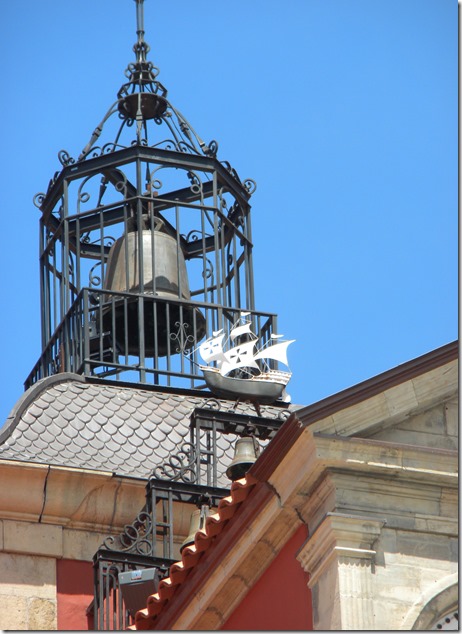 Even with the indirect and complicated connection of Tolomato Cemetery to Pedro Menéndez, we felt we needed to do something special for this anniversary. And what could be more special than opening the cemetery for visitors? 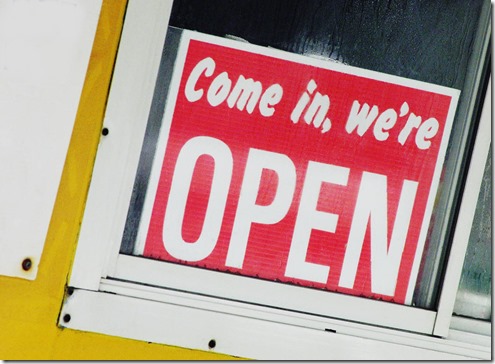 So our gift to honor the anniversary will be a special opening on from 12-3 pm on Saturday, September 5th, the “big weekend,” when visitors will be thronging downtown for all the musical and other events scheduled for that time. Who knows, we might even have a little City of St Augustine birthday cake – and a toast to our city’s founder, the Adelantado Pedro Menéndez de Avilés!

Posted by Elizabeth at 8:04 AM No comments: