Tolomato Cemetery is so photogenic that photographers simply can’t resist it.  When we were open last month, we had two photographers quietly posted in a remote corner taking some rather unusual photos. 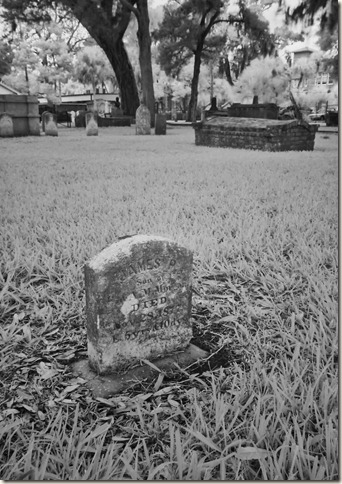 These are infrared photos, meaning that they are taken using a filter or a film that is sensitive to infrared light. They were taken by photographer Steve Neff, who plans to come back and take more photos at some time when the cemetery doesn’t have as many visitors.  The technique is a little tricky, and judging by what we could see of the photographers as they focused and refocused, requires considerable care and adjustment, and having unexpected human figures suddenly walk across their carefully composed scene made it a lot  more difficult.

The above photo is the marker of “Little James,” a child who is buried near the front of the cemetery and is a favorite with the ghost tours.  This photo certainly makes his burial place very evocative and mysterious looking.  Notice how the leaves of the trees come out as a sort of shimmering cloud. 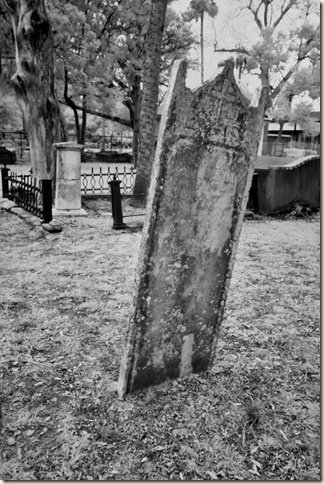 Steve Neff also took this photo of the marker of Fr. Edward Mayne, one of our more dramatic markers because of its shape and the way it leans.  Steve will be back and tell us more about his work sometime later this spring.

Posted by Elizabeth at 8:51 AM No comments:

Tolomato on the Map

Preparing for a talk I have to give on St Augustine maps, I visited the Google mapmaker site…and I got Tolomato on the map!

Google has a feature that allows people to add a site to their maps. Google map enthusiasts review the addition, authenticate it, and then add it to the Google map as one of those little orange balloon shapes.  It’s called Google Mapmaker, and it’s a lot of fun!

So I sat down and did it this week. It was surprisingly easy. The reviewer wrote with a couple of corrections, and lo and behold, here it is.  It’s accompanied by a photo taken from Google Streetview, so it has the coordinates. A screen shot of Tolomato Cemetery on the Google map: 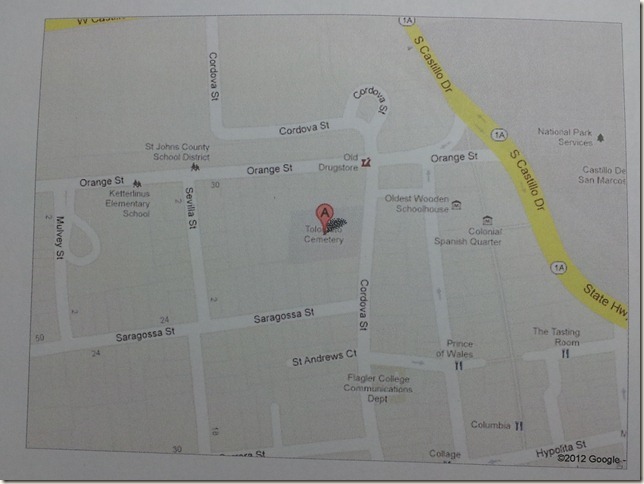 If you want to check out Google Mapmaker yourself, this is the short URL: http://g.co/maps/5uajm
Posted by Elizabeth at 4:07 PM No comments: