Saturday, May 7, 2016 was the big day! After some 220 years of starts, false starts and even indifference, Tolomato Cemetery finally got the entryway it has always deserved, one worthy of the beauty of the site, the City of St Augustine and, most important of all, the people who rest within it.

Years of work on the part of the TCPA went into this - in fact, we checked back in our records and saw that we first kicked off plans in 2012 - but now it's done.  And the results are beautiful, even more wonderful than we had hoped. 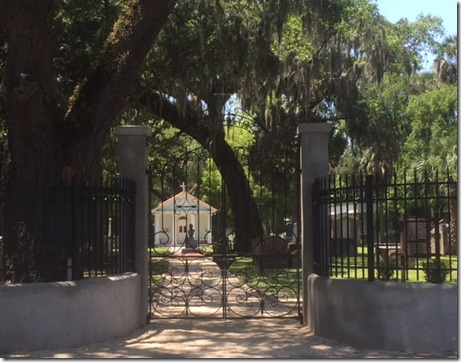 In the course of the project, the old chain-link and barbed wire fence on the front was removed, the masonry wall was rebuilt, a new fence was added to the top of it, and a splendid hand-forged wrought iron gate was added to the entryway, topped by the name of the cemetery and a cross in copper. 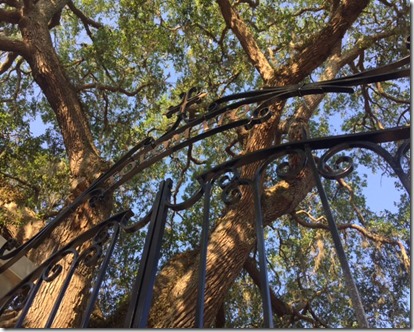 This project represents a solid four years of work by the Tolomato Cemetery Preservation Association.  At our board meeting planning for the dedication last week, a member commented that it seemed like we had been working on it forever – and when Louise Kennedy, our Secretary, checked her minutes, she found that the agenda item first appears way back in 2012!  That’s not quite forever, but it is certainly most of the life of the organization, which was only founded in 2010.

The board of the TCPA certainly deserves massive thanks for all the hours and days and weeks spent on this project, ranging from fundraising to consulting with designers and contractors to passing through the HARB (Historic Architecture Review Board) review and other bureaucratic chores.  They’re very modest, however, so while you see them scattered through these photos, such as that of the procession to the gate shown below, they wouldn’t step out for a feature photo!  But we all know who they are! 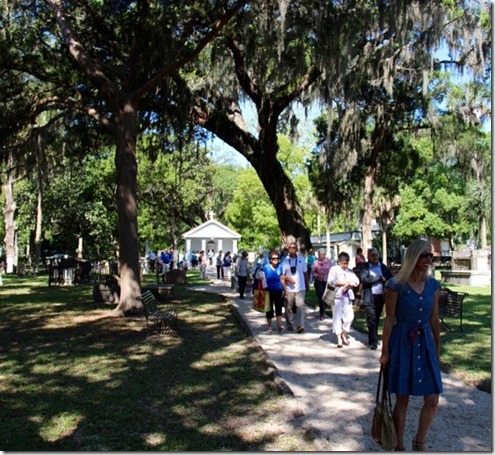 Many people were involved in this project, and the purpose of the dedication was to formally open the gates, which were completed only about two days earlier, and thank those many people.We had beautiful weather for the event, held in front of the Varela Chapel and then moving to the gate for the blessing by Fr. Tom Willis.The guests and a few lucky tourists who were just passing by ate cookies and listened to Elizabeth Gessner, President of the TCPA, describe the work and introduce the people who had participated in this nearly four-year-long project. 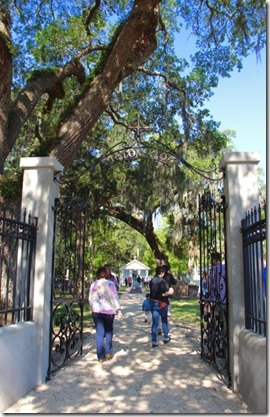 So let’s start with the donors, without which nothing would have been possible! There were first of all the many, many donations we have gotten through our “Foot of Fence” program, where people could visit the website tolomatofence.com and contribute $10 to “buy” or sponsor a foot of fence – or could “buy” as many feet as they wanted. All of these names and those of all the other donors, along with technical information on the construction and the project, will be included in a time capsule to be placed near the front wall sometime this year.

We also had larger individual donors who made memorial contributions and will have memorial plaques placed on the inside of the front wall. More on that as it happens! 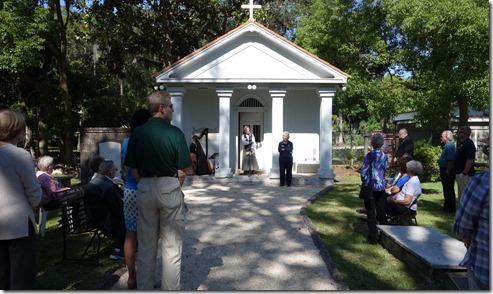 Also present were members of the Rotary Club, represented by Katherine Battenhorst.  Because of the very, very generous 450th Commemoration donation made to the project by the Rotary Club, the northern end of the outside fence now bears a splendid new bronze Rotary plaque honoring this donation so that visitors can see it as they walk downtown from the City parking garage. Louise Kennedy, TCPA Secretary, admires the plaque in this photo below. 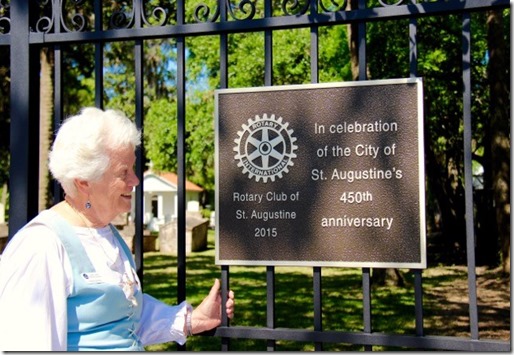 But there were other people who were crucial in this, and they were present to receive their accolades. Don Crichlow, the St Augustine architect who is descended from about half of the historic families whose names can be seen in the cemetery, donated his graceful plan for the fence and entryway that enabled the TCPA to go ahead. The light fence on top of the wall, conserving the 100-year old curve into the gate, are particular features of this plan. We’ll have more historical information on the fence and gate in a blog post within the next week or two so that you can see its connections with that first project of more than 200 years ago.  But meanwhile below you see Don Crichlow talking about his part in this lengthy project. 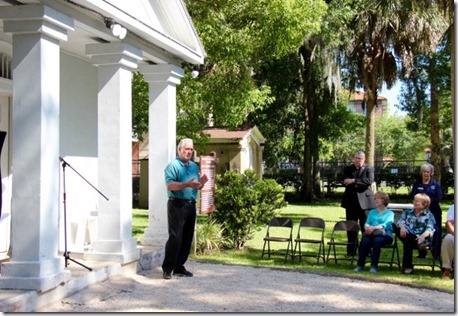 And then we have the gate! We already see visitors standing in front of it to have their pictures taken and people taking photos of the gate alone, so it’s a pretty spectacular addition that I think will become a St. Augustine landmark. And it was made by a St. Augustinian, Scott Thompson, shown below opening the gate and doing his happy dance because it was finally done and everything was perfect! 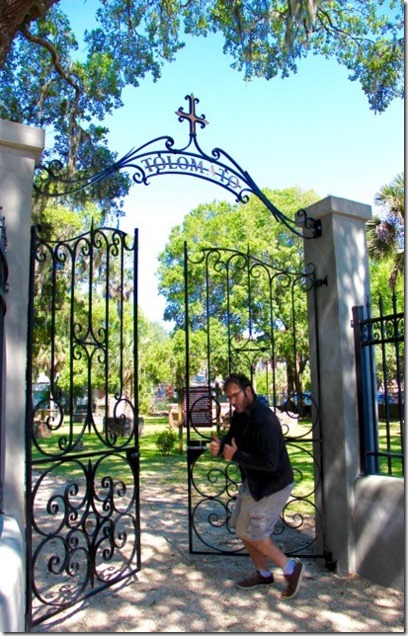 Scott is a graduate of Flagler College and still lives in St Augustine, and actually spontaneously proposed his design at an Open Day when he was visiting with his brother and friends. Graduating with a BFA, he found himself gravitating towards metalwork and is now the blacksmith for an ornamental metalwork company in Jacksonville. He researched different styles and designed the perfect one for this site: an 18th century Spanish style piece, light, airy but at the same time formal and elegant. The gate is wrought iron and the name of the cemetery and the cross are copper, so they will develop a beautiful patina with age.  Everything was forged by Scott at his shop in Jacksonville. 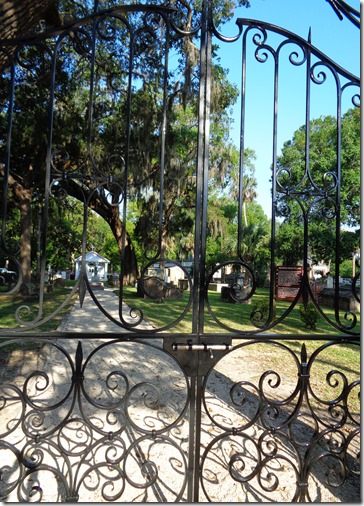 We also had another “special” heir of Tolomato who came to bless the gates and be the first one to open them: Fr. Tom Willis, the pastor of the Cathedral Basilica (which owns the cemetery). He is a St Augustine native and in his way is also the “heir” of the several St Augustine priests buried in the cemetery, particularly Fr. Miguel O’Reilly, who was responsible for the first fence and gate at the cemetery some 200+ years ago. Below we see Fr. Tom with Scott Thompson, Elizabeth Gessner and Don Crichlow. 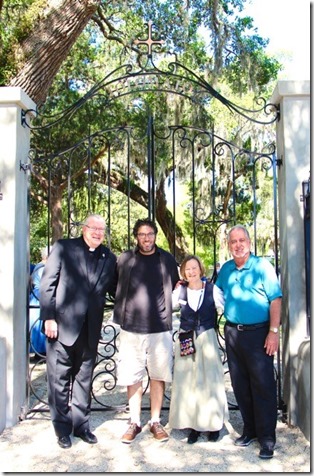 Fr.Tom gave an address on the chapel porch and then led the group from the chapel to the gate while Joanie Oliveros Taylor, Don Chrichlow’s cousin and therefore also related to half the people in the cemetery, played “Amazing Grace,”  accompanied by our “official Chapel Harpist,” Mary Jane Ballou. And then Fr. Tom blessed the gate while the crowd stood on the inside. 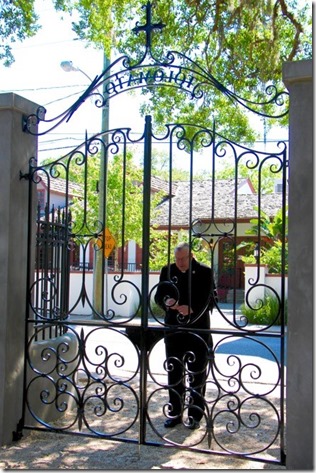 Then, as a visual representation of Fr. Miguel O’Reilly and all his predecessors and the history of this place, Fr. Tom Willis was the first person to officially open the gates and go right on through. 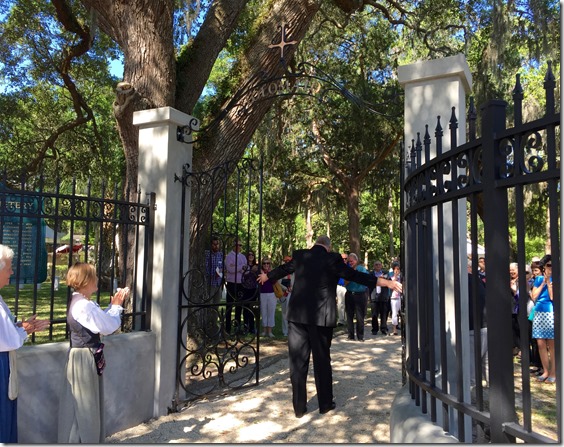 The moment we had all been waiting for!  By the way, notice the beautiful curve in the fence, which follows the restored old wall and was part of Don’s design, executed in aluminum by local metalworker Glen Easters.

After that, we all went back to stand around the chapel and eat cookies and take photos, such as those in this post, taken by Nick McAuliffe, Patty Kelbert and Joan Roberts.  Meanwhile, Matt Armstrong stayed at the gate, proudly welcoming passing St Augustine visitors to step through the gates. 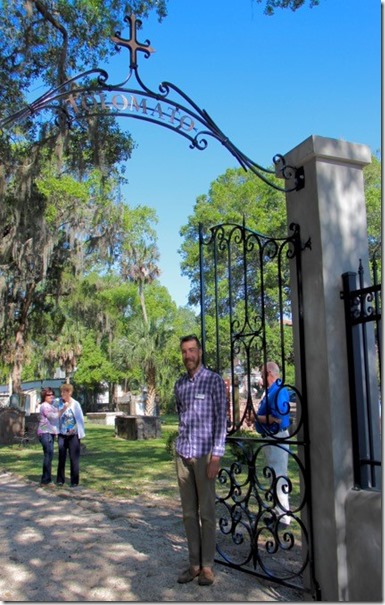 It was truly a beautiful day and a wonderful moment for Tolomato Cemetery. We are hoping that it is pleasing to both past and present St. Augustinians and to our many visitors. The TCPA is very proud of the beautiful work that finally gives the cemetery an entryway worthy of its history and of the people resting there, and thanks all of the many people who helped in this achievement. 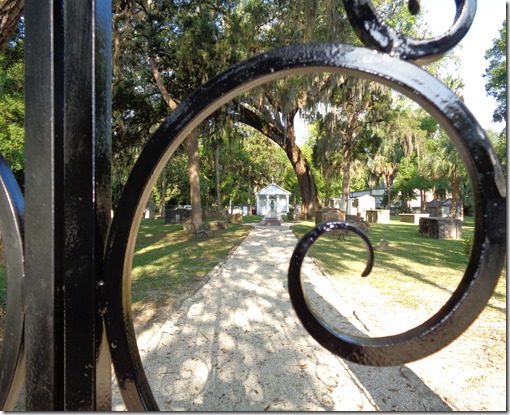 Posted by Elizabeth at 7:20 AM No comments: