Just where is Minorca, anyway?

This is a frequent question when we discuss the Minorcans at Tolomato Cemetery, and I’ve never been sure that people can really visualize it.  We might have to attach a map of Spain to the Minorcan informational sign that we have at the cemetery.

Minorca is one of the Balearic Islands (Islas Baleares, in Spanish) that are located off the northern Mediterranean coast of Spain (the three blobs at the center right in the above photo). The Spanish spelling is Menorca, and you will see it spelled both ways in St. Augustine.

Like all Mediterranean islands, they had a long history of being overrun by diverse invading forces, and during their existence have been dominated by unknown pre-historic peoples probably from the Levant, the Phoenicians, the Greeks, the Romans, the Arabs, the Kingdom of Aragon (a largely Catalan-speaking pre-unification Spanish kingdom), modern Spain, and even, at various times, by England and France.  The big island, Mallorca, also had a large and ancient Jewish population, probably established during Roman times and the Diaspora.

Minorca and the other Balearic Islands are now part of Spain, and form one of the 17 “comunidades autonomas” (territorial divisions similar to US states) into which Spain was divided in its 1978 Constitution.

There are three important islands that make up the Baleares. Minorca refers to the “small island,” while its neighboring island is named Mallorca, or the big island.  As you can see from the photo of Minorca below, taken when I was actually on my way to Mallorca last spring, it is indeed a small island. 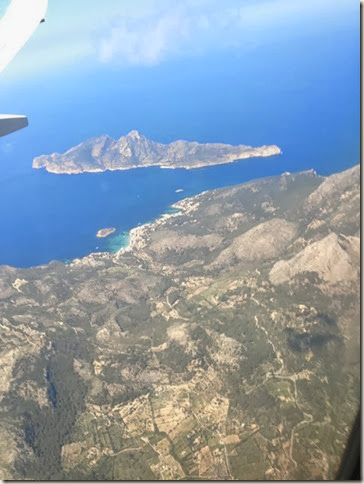 Much of it is very dry and windswept, particularly the northern part, which is subject to a constant gale from the Mediterranean and features trees that are practically lying on their sides.  That part of it has been established as a UNESCO Biosphere Reserve because of the unusual or even unique animals, plants and natural conditions found there.  It is also littered with prehistoric sites (dolmens, menhirs, etc.) from whatever the mysterious peoples were who first arrived at the island thousands of years ago. The rough coast is also the site of many shipwrecks and is of great interest to marine archaeologists.

The other side of the island is a little more moderate in climate, and features the old city of Ciutadella (“Citadel”) as its main city.  But the city on the east side of the island, Mahon, is the capital and the one from which “our” St Augustine Minorcans set forth.

The British had captured Minorca in the War of the Spanish Succession in 1708 and settled in Mahon for several decades, losing the island to the French in 1756. However, Minorca was returned to England in the settlement of the Seven Years’ War, the same one that led to St Augustine’s British Period (as a result of the treaty settling that war) and the English occupied it until 1783, as they did St. Augustine. And it was for this reason that the Scottish Dr. William Turnbull, who brought the Minorcans to Florida, based his operations there.  Below we see the Hugo Ohlms mural in the Cathedral that depicts the arrival of the Minorcans in St Augustine after they fled Dr. Turnbull’s indigo plantation. 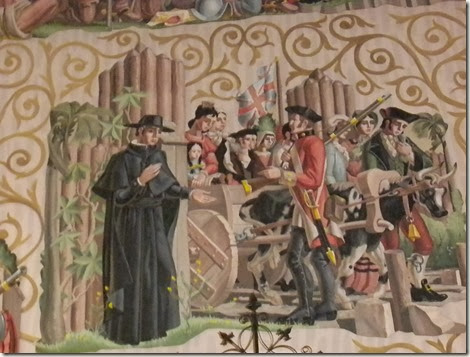 Mahon is the second deepest port in the world and was a site of British naval activities. For this reason, Minorca was also the setting of parts of the famous Patrick O’Brian nautical tales (such as Master and Commander) concerning the fictional British commander Jack Aubrey.

Spanish cheeses are generally made of sheeps’ milk or goats’ milk, and cow milk cheeses are rare except in a couple of parts of “wet Spain,” such as Galicia, which has enough rain to provide grazing for cows.  Somehow the British, devoted as they were to butter and mild cheeses, managed to raise milk cows on Minorca and left behind a cows’ milk cheese heritage reflected in the Spanish cheese known as “Mahón.” 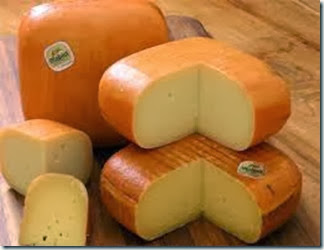 Accompanying this is the British-descended local gin production and a local gin and lemonade drink that is popular on the island.

Mahon is also famous as the source of the name of the condiment now known as mayonnaise, a variant on a Catalan aioli (oil and garlic or egg based sauce) that became popular in France and England after their conquests of the island. 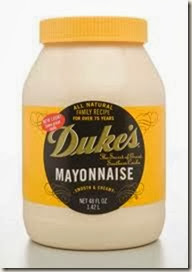 The British ceded Minorca to Spain in 1783, briefly recaptured it during the French Revolution, and after disputes with France following the Revolution, in 1802 they once again returned it to Spain and it has been part of Spain ever since.

Mahon reflects this past, for when you come into the harbor on the ferry from Barcelona or one of the huge cruise ships that docks there, you will glimpse a row of high, narrow, long-windowed 18th century British houses on one side – and the low, flat-roof, thick-walled, limewashed traditional Minorcan masonry houses on the other side. Or at least you did,  years ago when I first saw the harbor. Now, of course, now these are nearly concealed behind vacation “chalets” or condos built in recent years. 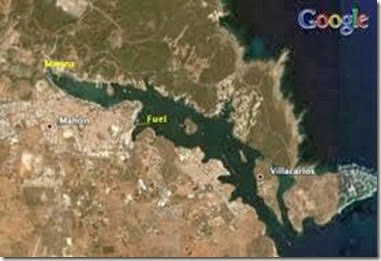 Let’s see…what else?  Modern Minorca (Menorca, in Spanish and Catalan) is now a big tourist destination, known for its little calas or coves with blue waters and white sands. It also many wealthy semi-resident foreigners docking their yachts in its harbors, and supports a charming rural tourism industry in the more remote farms and towns.  The languages are Catalan and Spanish, but you can hear virtually any other language in the world as you go through the old stone streets of Ciutadella or Mahón. 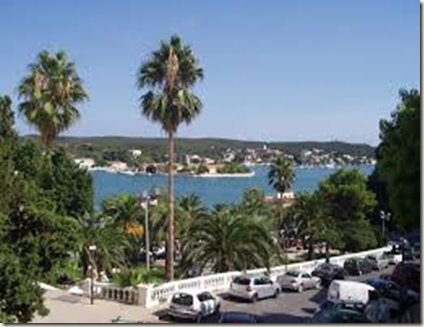 Posted by Elizabeth at 4:44 AM No comments:

A Fungus Among Us

When we were at the cemetery last week, Louise and Nick spotted what looked like invading columns of fungi approaching from points on the south side of the cemetery. 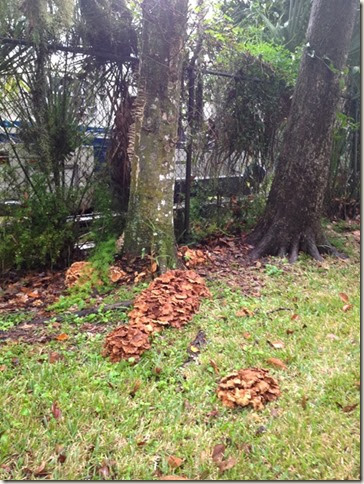 We went over to investigate more closely and found that these dense clusters of light brown fungus were thriving at the base of trees that had been cut earlier in the year or were dead from some other cause.

Thinking it would be an easy task to identify them, I went to the internet – but I had forgotten how many thousands of kinds of mushrooms exist in the world!  Finally I came up with a possible name for our invaders: amillaria tabescens, known to its friends as the ringless honey mushroom. 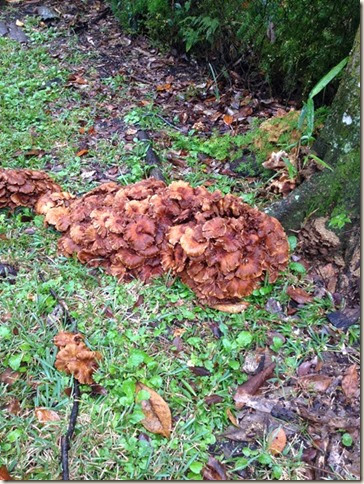 This fungus is actually growing from a root system underground and follows the course of decaying roots and branches of dead trees.  It is common in the fall, especially after patches of rainy weather, and we met all the qualifications for its survival: warm, moist soil, yummy rotting vegetation, and cozy shade.

It is very short-lived and has probably already dissolved back into the ground from which it seemingly emerged. But watching the natural phenomena come and go at Tolomato Cemetery is one of the most interesting features of visiting the cemetery.

Posted by Elizabeth at 5:54 AM No comments:

All Souls Day at Tolomato Cemetery

November 2 is known as All Souls Day in the Catholic liturgical year, and it has traditionally been the day for visiting cemeteries, praying for the repose of the souls of the people buried there and blessing the graves.  Because November 2 fell on a Saturday this year, we were able to open the Tolomato Cemetery for a special visit on All Souls Day.

The day was gray and rainy, but fortunately it had ceased to pour by afternoon, when Fr. Tom Willis and Fr. James Kaniparampil came over from the Cathedral to bless the graves. In the photo below, they wait for people to assemble from the various points of the cemetery, where they had been visiting graves or seeking information about ancestors. 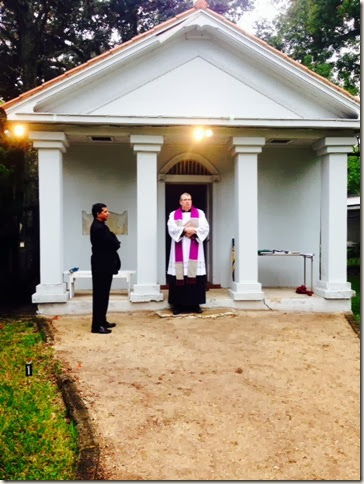 Once again, we had visitors who discovered that they may be related to some of the St Augustinians now buried in Tolomato Cemetery.  The couple below are of Cuban descent and came looking for a branch of the Martinez family that was originally from the Canary Islands but settled in Cuba.  While Cuba had many Canary Islander immigrants in the 19th century, Spain had also encouraged a group of Canary Islanders (Isleños, in Spanish) to settle in St Augustine in 1757.  Like all the other Spanish citizens, these Isleños went to Cuba in 1763, and are identified in records of the emigration as belonging to the militia of the Familias Isleñas. 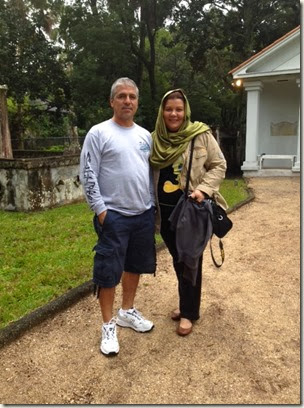 While St. Augustine relied primarily on the professional enlisted soldiers for its defense, all men were assigned membership in militias.  The militias were based on broadly defined population groups:  “Vecinos Antiguos,” meaning the descendants of the original settlers; “Familias de Yndios,” meaning the Indian groups who were settled at the missions; “Familias Isleñas,” meaning the Canary Island immigrants, etc.  Was it possible that this couple’s Isleño ancestors had at one time been in St Augustine?  Armed with our information and a referral to the Cuban Genealogical Society in Miami, our visitors left to do more research. 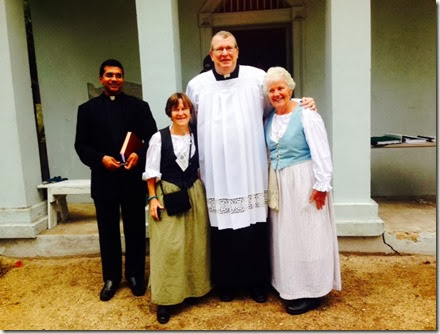 But they were part of the group, some of us descendants and some not (such as docents Louise and Elizabeth, above in their 18th century dress), who gathered at Tolomato Cemetery to commemorate the lives and deaths of the many diverse people who founded and built our city and to join once again in the beautiful, age-old prayers.

Posted by Elizabeth at 3:41 AM No comments: