Today was an exciting day at Tolomato Cemetery. Janet Jordan and I went out to await the arrival of the restored stone that had covered the crypt in the Varela Chapel and has been off for restoration for several weeks (during which time the entire floor was retiled). Carl Halbirt, the City Archaeologist, came along to lend encouragement and get the first public viewing!

Marble Masters of Jacksonville, a wonderful, craftsman company, brought the stone back today and set it over the crypt in a matching marble “crib.”  They were able to remove most of the staining from it and gave it a low buff so that the beautiful stone and the lovely lettering of the inscription are shown to their greatest effect. They also installed new rings, made by an artisan in Georgia. Here they are moving it into the chapel… 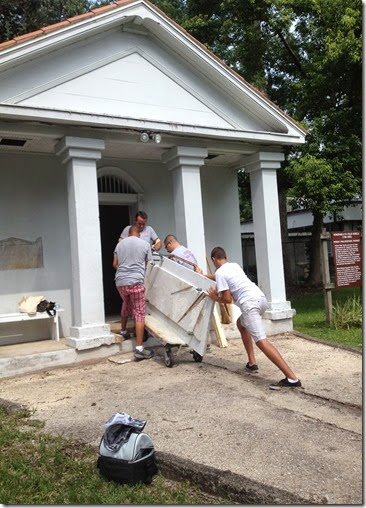 And here it is, installed. 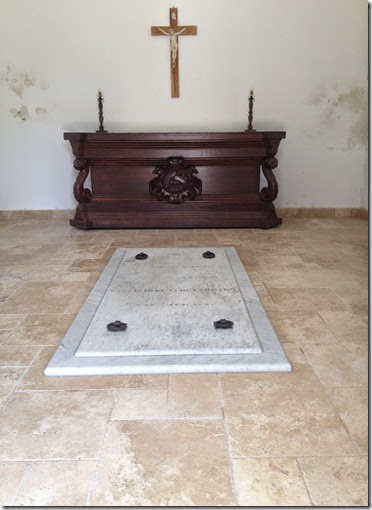 Below is the photo of the original 1854-55 installation. Fr. Varela died in early 1853, but it took several months to build the chapel and several months more for the Cuban builders to get the altar and the stone – probably Cuban marble – and the other decorative elements.  Fr. Varela was finally removed from his original burial place in the cemetery and reburied in the completed chapel in 1855. 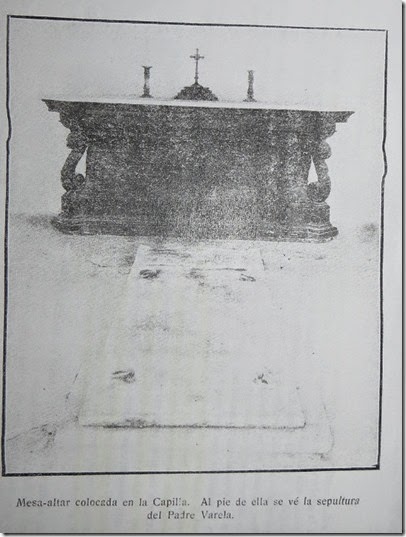 The above photo is from a book printed in Cuba in 1924, and is not extremely clear. But you can et the general idea and you can see how close the new stone is to the old one and what a beautiful job this company did on recreating it from this photo.  More later on marble, restoration, and various other things. But for now, enjoy the stone – and come out to see it for yourself when you’re next in St Augustine.

Posted by Elizabeth at 3:22 PM No comments:

The slow and multi-phased process of restoring the floor and the stone in the Varela Chapel has gotten one step closer to completion. 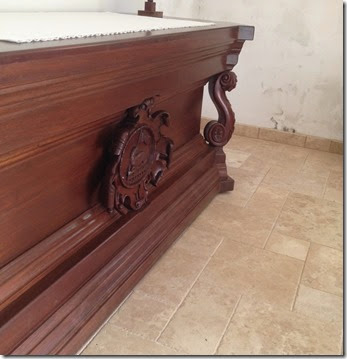 Here you see the old mahogany altar on the new travertine floor.  The original floor was this color and its builders referred to it as “coquina,” although it was probably a type of tabby, that is, blocks made out of concrete or mortar and crushed coquina. This type of block is now used mostly for outside paving, but it was used for flooring for buildings of this type in St Augustine. It was referred to as a terraplen floor, or earth-filled floor, and in this case it is set on a bed of sand.  When it used inside, it could be softened with a carpet or rugs, and the contemporary accounts tell us that there was a “rich carpet” in the chapel to cover this surface. 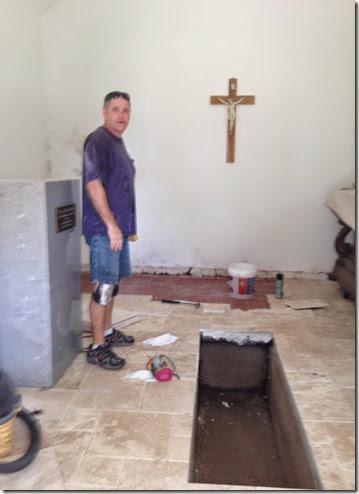 The next step is replacing the crypt stone, which is still off for its restoration treatment.  But in the meantime, you can see how much lighter and brighter the travertine – beautifully set by tile setter Joe Roddy, above, in what is called the “French pattern” of different size tiles – has made this space. Better yet, come and see it yourself, since we’ll be open this Saturday, July 19.

Posted by Elizabeth at 1:59 PM No comments: