When visitors pass through the Varela Chapel at Tolomato Cemetery, they often ask about the “lamb on the book.” Of course, they’re referring to the carving on the front of the altar, created out of mahogany somewhere between 1853 and 1854 by Havana cabinetmakers specifically for the chapel. 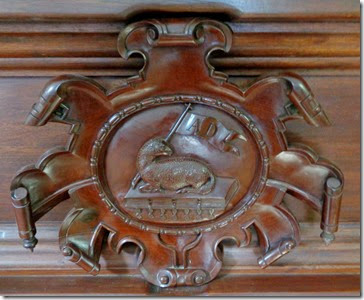 This is a very ancient image that has appeared since at least the 6th century in Western art, and is known in Latin as the “Agnus Dei,” or “Lamb of God,” representing Christ and often the Last Judgment. The title “Lamb of God,” of course, comes from the Gospel of John, where John the Baptist says, “Behold, the Lamb of God…” Certainly, those with a literary, artistic or especially with a Sunday school background will recognize the book as the Book of the Seven Seals, the book of judgment, which is described in the New Testament Book of Revelations. The Lamb “that was slain” is mentioned numerous times in Revelations, which also declares that the Lamb will open the Book of the Seven Seals at the end of time.

The Lamb is often shown standing, supporting a banner bearing a cross, but there are numerous variations on the theme. The Tolomato Agnus Dei is holding a banner carved with the letters “AD” for Agnus Dei and looking triumphantly over his shoulder. This image seems to be a compromise between the standing lamb and the one we see below, which is a prostrate and not very triumphant looking lamb that appears on the back of a 19th century vestment on display in the Diocesan Museum at the Mission Nombre de Dios in St Augustine. It is done with beadwork and embroidery. 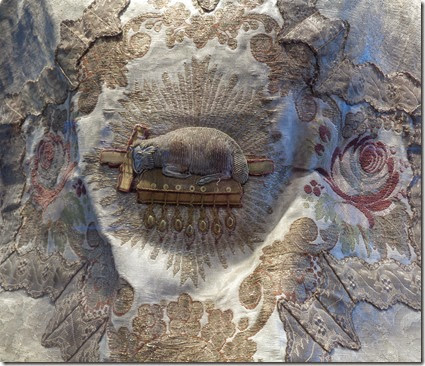 And that image itself almost seems as if it had been based on this very famous painting done in 1640 by the Spanish Golden Age painter, Francisco de Zurbarán, with its touching image of a lamb bound for the slaughter. 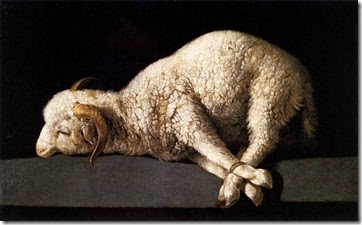 But there are other lambs at Tolomato that mean something a little different. In the cast-iron gate of the Hernández family plot enclosure, which we are in the process of restoring, you’ll find two lambs peacefully resting under a willow-tree beside a body of water. This was a very common image in 19th century funeral art, and in fact lambs still occasionally appear on modern monuments. 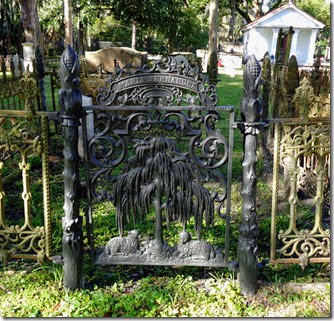 Here the lamb represents tranquility, innocence and peace. We also see a couple of doves flying upwards into the willow trees; doves are a very ancient symbol of peace. And the willow tree had come to be associated with mourning in 19th century art, probably because of its gentle, drooping shape and possibly because of a reference in Psalm 136 or 137 (depending on your numbering preference) to the Jews in their Babylonian exile, weeping and “hanging their harps on the willow trees.” Willows were also considered evocative because they grow near still and often dark waters, such as lakes or slow-moving streams. 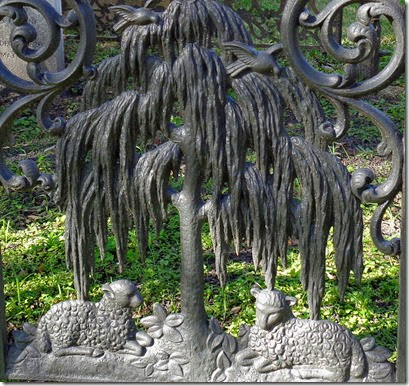 So this brings us back to our literary, artistic or Sunday school background as we recall the 23rd Psalm, which begins with the words, “The Lord is my Shepherd,” and includes the line “He leadeth me beside still waters.” Now you know are the many meanings of Tolomato’s tiny flock of little lambs.

Posted by Elizabeth at 3:44 PM No comments: