Spending Christmas in Santa Fe, New Mexico, I came across an unexpected trace of St Augustine, or more properly, of Florida.

As we all know, the Franciscans established an extensive mission chain in Florida, starting in the 16th century. It lasted until the 18th century, when it was finally destroyed by British and hostile Indian attacks. La Natividad de Nuestra Señora de Guadalupe de (or possibly "del") Tolomato was one of these missions, having started in Georgia in the 16th century, relocating to Florida in the 17th century and finally moving to the site that is now Tolomato Cemetery in the early 18th century.  At one point, Tolomato probably looked like this New Mexico cemetery below, although minus the plastic flowers. 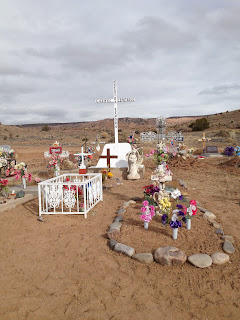 Franciscan administrative areas are divided into provinces, and "our" Franciscans were from the Provincia de Santa Helena de la Florida, which had a convento in Havana that served as its convent, seminary and headquarters. They founded a convento in St Augustine, at the site where the St Francis Barracks are now located, on land given them for this purpose in 1588.  The wooden convento and its library, alas, were destroyed in 1702 by the English pirate Robert Searles, but it was rebuilt in stone sometime in the mid-18th century, only to be turned over to the British shortly thereafter when Britain received St Augustine in the settlement of the French and Indian War in 1763.  This more or less terminated the Franciscan presence in St Augustine.

However, I found one of our Franciscan community a long way from home, in the Southwest where he died in 1781 during an Indian revolt. I found this out from a rather unexpected source, a painting done in the late 18th century (with very little information offered about it, unfortunately) on display at the New Mexico Museum of History in Santa Fe.  It shows two friars, wearing the grey-blue habits worn by these missionary Franciscans, standing in front of a scene depicting their deaths. They were both clubbed to death at their remote mission. 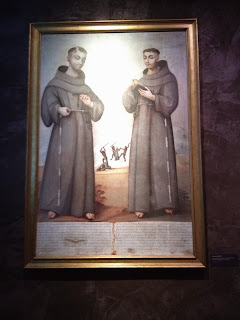 While the sign next to the painting attributes the scene to the Pueblo Revolt, this turned out not to be the case. The well-known Pueblo Revolt in what is now New Mexico, the culmination of Indian conflicts with the Spanish administrators over the years, began in 1681 and was over a few years later; in fact, only 12 years later, the Spanish returned, since the idyllic era that the revolt’s leader, Popé, had promised never materialized and conditions were in fact worse than before for the Indians (who were also now vulnerable to hostile tribes such as the Apaches).  But in the meantime, several hundred Spanish settlers and 21 friars had been killed.

But reading the text, I found that the Franciscans in this painting were killed nearly 100 years after the Pueblo Revolt, and in fact, the places mentioned were not even in New Mexico.  Who were they and when and where did they die? 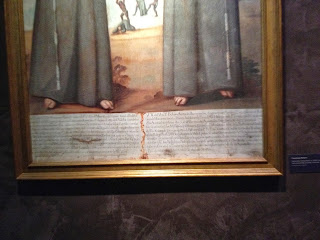 Reading the information under their portraits, we find that the friar on the left was Fr. Francisco Garcés, who took the habit in his native Aragon, Spain, and went directly to the Franciscan missionary school (Colegio Apostólico de San Fernando, but more about that some other time) in Mexico City in 1763.  He died at the “Misión de la Purissima Concepcion del Rio Colorado” in the area rather vaguely known as Sonora (a formerly disputed territory now part of Mexico, Texas, Arizona and even California) in 1781 at the age of 42. 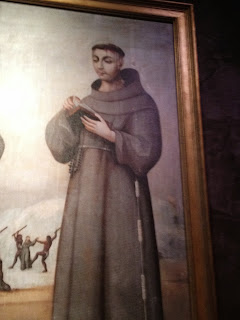 The other friar was Fr. Juan Antonio Barreneche, a native of Navarra, Spain, who had come to the New World, specifically, to Havana, where he was took the habit and was ordained, becoming a member of the Franciscan province of Santa Helena de la Florida.  This, of course, was during the period in which St Augustine was no longer Spanish, so the Franciscans no longer had a presence in our town.  After ordination, he went to the missionary school in Mexico City, and from there, accompanied Fr. Garcés to the mission, where he arrived in 1779 and died a holy death there in 1781 at the age of 31. It is recorded that during the attack, he continued to hear confessions and give last rites to the Indians and the Spaniards until he himself was finally killed, one of the many who died in what looks to us like a barren and unpromising land. 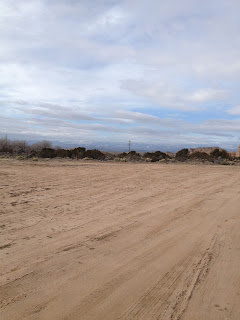 Having eliminated the possibility that they died in the Pueblo Revolt, I moved on to other possibilities. There were several different tribes in this area, the Yaqui, the Pima, the “Moquis” or Hopi, the Quechua, etc. and at various times, particularly as conflicts flared between peninsular Spain and the criollos of Mexico and then between Mexico and the North American settlers in the West, there had been many fierce but generally brief conflicts.  And of course, there were several missions dedicated to the Purísima Concepción (Immaculate Conception), for whom the Spanish and particularly Spanish Franciscans had a great devotion. Below we see La Conquistadora, a Spanish statue that is now an image of the Immaculate Conception, brought to Mexico by Franciscans in 1625 and eventually arriving in Santa Fe,  where it has been a devotional focal point for centuries, through all wars and disturbances and crises. 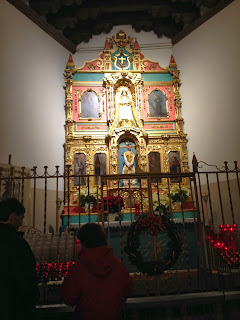 One mission of that name turned out to have been founded by the Jesuits, which disqualified it immediately; another important mission of that name was founded by the Franciscans, but it was in San Antonio, Texas. And then, finally, thanks to the miracle of the Internet, I found that a Misión de la Purísima Concepción had been established in 1779 in what is actually now a part of California, a place now known as Fort Yuma (right across the Colorado River from the city of Yuma, Arizona) by Padres Francisco Tomás Hermenogildo Garcés and Juan Antonio Barreneche.

It didn’t last long, because there was an uprising of the Quechan (or Yuma) Indians in 1781, and while it was directed at the Spanish administrators, the missionaries were killed as well, even though the mission population tried to protect them.  The mission itself was destroyed and in its place a fort was built by the US government some years later in the 19th century.  And then in 1919, it became a mission again, and is now known as St Thomas Indian Mission, which constitutes the easternmost parish of the Diocese of San Diego.

There is a monument to Fr. Garcés at the mission.  Below is a photo, from the town’s website, but better photos and a more detailed history can be found at US Mission Trail, a site maintained by a devotee of the missions. 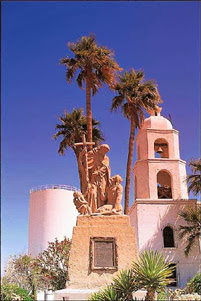 So while the museum’s caption on the painting was completely wrong, it’s a story that certainly was repeated throughout the Franciscan missions and no doubt reflects the situation in New Mexico as well. 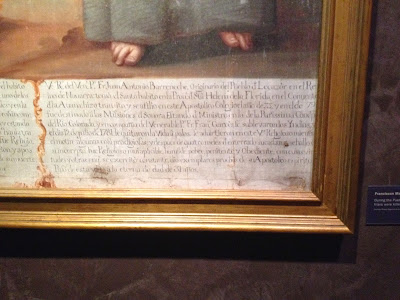 The text underneath the painting tells the personal side of the friars’ stories.  Let’s translate that of Brother Juan Antonio, who passed through Cuba at the same time that most of St. Augustine’s former residents had been long established around Havana.  Here is his story:

[Religious Life] of the Saintly Fr. Juan Antonio Barreneche, a native of the town of Lecazor in the Kingdom of Navarra, who took the Holy habit in the Province of Santa Helena of Florida, in the Convent of Havana, was transferred and affiliated with this Apostolic College in the year [17]75, and in [17]79, was sent to the Missions of Sonora, having his Ministry at the mission of the Purissima Concepcion del Rio Colorado [Mission of the Immaculate Conception on the Colorado River], accompanying the Saintly Fr. Francisco Garcés, when the Indians revolted and on July 12, 1781, they took his life by clubbing him.  During the riot, some remarkable things were observed about this Holy Religious and four months after his burial, his body was found to be almost incorrupt. He was a very gentle friar, humble, poor, penitent and obedient, who through these virtues and others that he constantly practiced gave an example that was proof of his Apostolic spirit. He passed from this life to eternal life at 31 years of age.

So we find a connection between Spain, St. Augustine, New Mexico, Mexico, Arizona, California, numerous Indian tribes, and, most important of all, St. Francis.  Below we see the Nativity Scene in the Cathedral Basilica of Santa Fe, since, after all, the Nativity Scene as such was introduced by St. Francis in 1223 and it also continues to this day. 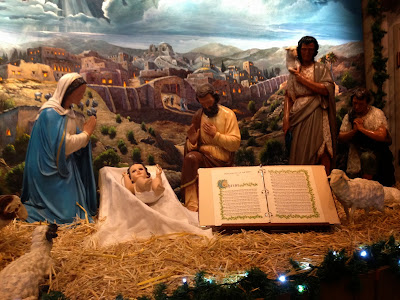 Posted by Elizabeth at 2:16 PM No comments: