The Tale of a Fence


As everybody who lives in St Augustine – and many who don’t – already know, we dedicated and blessed the new entryway at Tolomato Cemetery about a month ago, on May 7th, 2016.  This part of the project is done, although we’re still working on the back and sides and also plan to improve the stretch from the city sidewalk to the actual gate opening. But leaving aside such tedious details, we’d like to get back to some basic questions we are always asked, such as “How long did this take?” 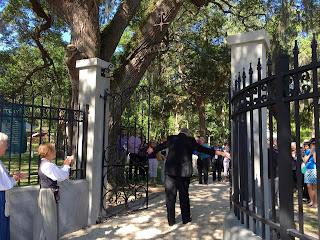 Well, it’s actually taken almost 240 years, since about 1777, with the arrival of the Minorcans in St Augustine during the British Period (1763-1784). A cemetery had probably existed on that site during the First Spanish Period, but it was associated with the Tolomato Indian mission village and Franciscan-run chapel located there.  This early map shows the location of the chapel, near the corner of modern Cordova and Orange streets. 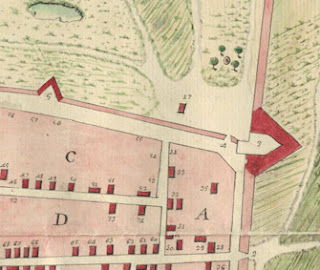 Normally, burials in Spanish Florida were under the floor of the church or in the churchyard.  There would have been some kind of a wall around the church, extending the consecrated ground and thus making it usable for burials. There’s no record that the Tolomato mission had such a wall, or at any rate, not a stone wall, but there probably would have been some delineation of the space, such as a wooden fence with a gate or a pillar, etc. In a Franciscan village, the mission bell was frequently hung in this area, but the mission bell at Tolomato was probably located in the four-story coquina bell-tower that is recorded as having been part of the Tolomato chapel.

So we don’t have any record of a wall at this time, but we do have a couple of odd features that are difficult to explain and may have been part of a wall or gate.  One of them is visible only in an old photo and must have collapsed long ago, but the other still exists and causes considerable interest among visitors, many of whom take it to be a very strange vault and ask how people could be buried in this small square space.  This pyramid-shaped pile of coquina is only about a 3 feet square and perhaps a little more than that at its top and is located right behind the vault of Elizabeth Forrester, the oldest marked burial in the cemetery. 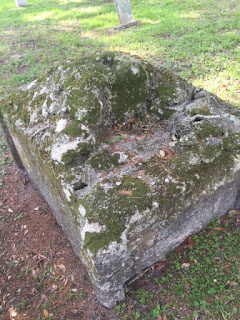 We have no answer, except that it was probably not a burial vault, unless it was an ossuary (receptacle for placing bones removed from overcrowded vaults or burials).  But it doesn’t seem to have much of an opening, other than the niche in the top, so it would have been difficult to get the skeletal remains into it without removing a few stones.  Speculation has now moved to having its be part of a wall or marking the boundary of an area, and the niche was perhaps for holding the base of a cross or some other marker and may actually have been part of the original mission site, with its "ermita de piedra," or stone chapel.

But back to what we actually do know about the wall. 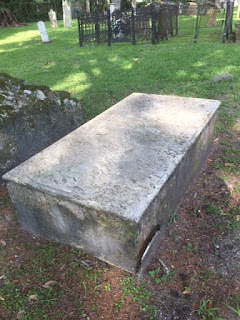 The earliest marked burial at the cemetery (and the oldest marked burial in the State of Florida) is that of Elizabeth Forrester, who died in 1798.  You see it above, with the aforementioned mysterious structure visible behind it.  At some point in the following years, grave robbers broke into the vault and stole Elizabeth Forrester's clothing for resale at one of the local thieves’ markets. They were caught and punished, and in 1809, the Spanish governor, Enrique White, ordered Fr. Miguel O’Reilly, the parish priest for the church on the plaza that would eventually be elevated into the Cathedral of St Augustine, to hire a guard and build a fence around the cemetery to prevent such a thing from happening again.

Fr. Miguel O’Reilly complained about the cost of this and said he wasn’t sure how much money was in the treasury because his assistant, Fr. Miguel Crosby, hadn’t audited the accounts for 11 years! However, we can assume that he went ahead and did it.  But again, we have no idea what it looked like, except that it was probably fairly basic, because in 1811, we see plans to change it. 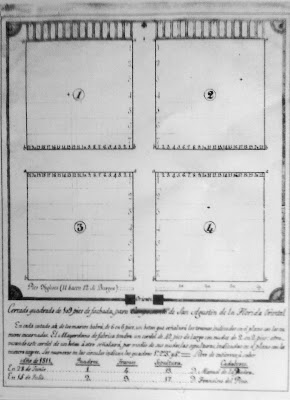 In that year, plans were produced to completely redo the cemetery, creating a more modern cemetery laid out in a grid pattern with numbered burial plots, and a row of stone vaults and a catafalque at the back of the cemetery. (A catafalque in a cemetery is a structure somewhat like a table, where the casket is placed during the final parts of the burial service.)  We see a stone wall around it with ossuaries in the corners and two pillars for a double-leaved gate. However, the governor died in 1811, Fr. Miguel O’Reilly died in 1812 (his vault is shown below), and the Spanish Empire, already under threat from the independence movements of Latin America and the North American tensions that would lead to the War of 1812, simply didn’t have the money or the will to make such expensive improvements to this modest little city. 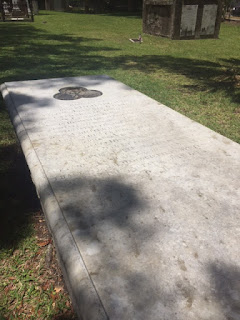 So the work was never finished - or even started - and the cemetery continued as it was for decades. Even in the mid-19th century, visitors to Tolomato Cemetery complained about the shabby appearance of the fence – which may have been the same one that Fr. Miguel O’Reilly set up in the early years.

In 1853, José María Casals, one of the Cubans who came to St. Augustine in 1853 to aid the ailing Fr. Felix Varela and found that they had arrived too late to do anything more than bury him, accompanied the parish priest, Fr. Aubril, to the cemetery to look at the land for the Varela Chapel. He comments that it was a lonely resting place, with a wooden enclosure and only four or five half-ruined old vaults, so clearly things had not improved much over the years.

Here we see a 19th century photograph of the old wooden wall. The “gate” seems to have been an interior door that had been lopsidedly hung between the crumbling wooden posts.

Even tourists mentioned its dismal state occasionally, and there were complaints from locals that cows kept knocking the fence down and getting into the cemetery.  But it seems not to have been until 1916 that steps were taken to replace the fence with something more dignified. On April 27, 1916, we see this notice in the St Augustine Record: “To Erect A Cemetery Wall: John Reyes has material unloaded on the ground for an artificial stone wall which will be built along the street line of the Catholic cemetery on Cordova street. The wall will be 117 feet long and 42 inches high. It will greatly improve the appearance of the cemetery, displacing the old fence which, although serviceable, was not very ornamental.”

Note the tactful description, “serviceable,” but “not very ornamental.”  So we may conclude that it looked horrible.

This resulted in the building of the concrete wall along the front and parts of the sides of the cemetery, which we see below in an early 20th century photo of strollers on Cordova Street.  Of course, the streets - particularly Cordova Street - had changed since the first days of the mission and cemetery, with some of them being straightened, some being widened, and some being eliminated.  However, allowing for a few feet that were acquired towards the front of the cemetery in the 19th century and the strip of land purchased in 1853 for the building of the Varela Chapel, thus making the original more square-like area more rectangular, the cemetery seems to have maintained its boundaries. 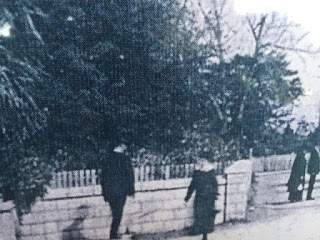 In fact, it is that very wall that came down to us and which we rebuilt along the front in this latest 2016 renovation, almost 100 years after the Record article.  The wall is made of a combination of concrete blocks, blocks of coquina (shown below), and even stacks of brick: in other words, whatever was at hand. 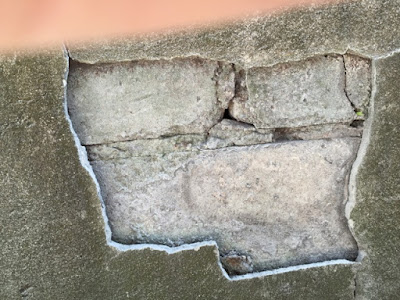 The 2016 repairs were a little more orderly, and consisted of adding concrete block and rebar pilasters to strengthen the wall while giving it another coat of concrete in those areas where it did not need repair. 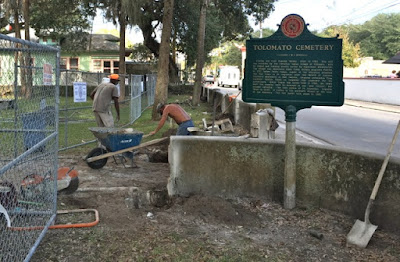 And of course, the other major improvement was the addition of two high pillars for holding the beautiful wrought-iron gate, topped by its graceful archway that at last proudly bears the name “Tolomato” and gives this beautiful place the honor that it is due. 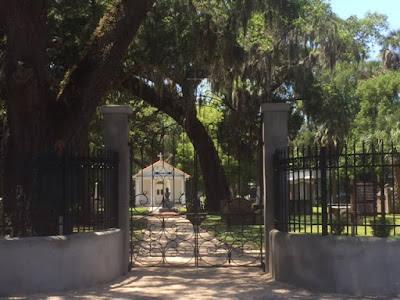 Posted by Elizabeth at 2:19 PM No comments: