Spring always brings our migratory visitors back to St Augustine, and this year, it’s started a little early. Our first three group visits this year have been very interesting and remind us what Tolomato is all about.
At the end of February, we had a  visit from the Greek community, led by the wonderful people from St Photios Shrine on St George Street. The many Greek burials at Tolomato are those of the Greek component of the Minorcans.  In St Augustine talk, “Minorcans” means those people who left Minorca – a formerly Spanish Mediterranean island under the control of England during St Augustine’s late 18th century British Period, also as a result of the settlement of the French and Indian War -  and who arrived at New Smyrna Beach in 1765. 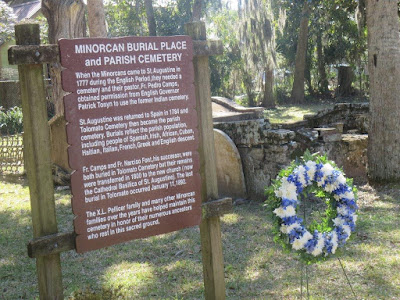 But this does not mean they were all Minorcans born and bred. Many of the people that Dr. Turnbull brought back with him as indentured servants (read: slaves) for his indigo plantation in New Smyrna Beach were Italians, Sardinians, Corsicans…and Greeks.  Dr. Turnbull had been the British consul in Smyrna, which was under the Turks at that time, and his wife was a Greek woman from Smyrna, Maria Gracia Bin Dura.  Above, you see the wreath placed by the Greek contingent at the Minorcan sign.  Blue and white are the Greek colors.


Dr. Turnbull's wife thought Greeks could withstand the Florida heat better than the usual English or Irish laborers generally used by the English, so they had originally gone to the Mediterranean to collect Greek workers. However, conflicts  with the Turks had increased, and many of the Greeks had either fled the area or were not permitted  by the Turks to leave.  So Dr. Turnbull dropped off his Greeks on Minorca and then went and collected more workers from other Mediterranean ports – and finally had some 1300 people to take back to Florida.  And the rest, of course, is history... 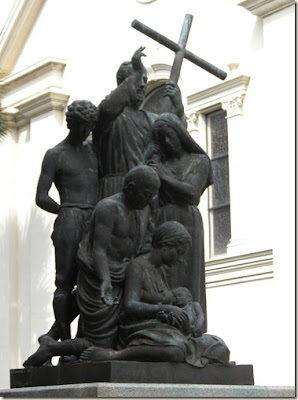 In 1777, the Minorcans rebelled after years of mistreatment at the hands of Dr. Turnbull and came to St Augustine. They were accompanied by their priest, Fr Pedro Camps, who served both the Catholics and the Greek Orthodox in the colony.   His statue at the Cathedral, shown above, depicts him protecting the Minorcans of the colony.
He was given permission to bury his parishioners at the former Tolomato Indian mission, so there are many Greeks from that first immigration buried at Tolomato Cemetery.  Some of the names have been shortened and Anglicized – such as Papy, for example, which was originally a much longer and more complicated name – but the Greek presence is throughout.
So it was wonderful to host our Greek friends. This was a special visit, provided for the Greek Deputy Minister, Terens-Nikolaos Quick, shown in the photo below. With him were the Greek Consul in Miami, Adamantia Klotsa, several members of the local Greek community, and Bishop Dimitrios of Xanthos, as well as Polly Hillier, director of St Photios Shrine and many, many Greek descendants of the New Smyrna arrival.  It was a beautiful visit and the TCPA crowd was thrilled to welcome them. 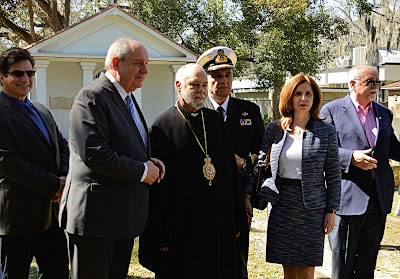 
The next group visit was a large group of Cuban refugees and their Cuban American descendants from Miami, who came to visit the burial place of Fr. Felix Varela. They were led by Julio Hernandez of Miami and were members of the Union Familia Escolapia Cubana (UFEC), an association made up  alumni of schools in Cuba and the US Cuban community run by the Escolapians or Piarists, a religious teaching order founded in Rome by a Spaniard, St. Joseph Calasanz, in the early 17th century. The religious order is known in Spanish as the Orden de las Escuelas Pias (Order of the Pious Schools) and is the oldest of the orders founded specifically for education. 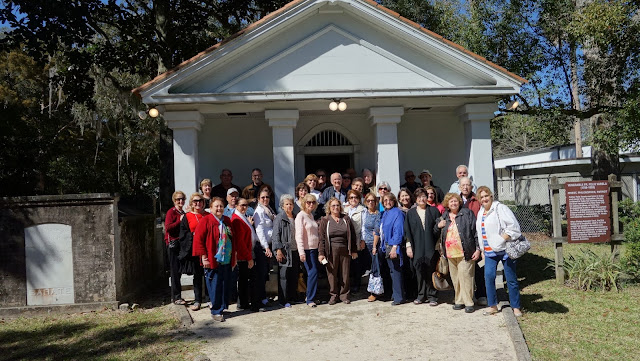 Establishing themselves in Cuba in the mid-19th century, they ran several important schools in the cities of Cuba that provided an excellent education for both the children of prosperous families and the children of the poor.  They were particularly known for their teaching of religion and humanities, and their devotion to Fr. Varela results from their respect for him as an educator and tireless teacher himself. He wrote and did much during his years in Cuba aimed at improving and modernizing education throughout Latin America, producing textbooks as well as writings on educational theory. 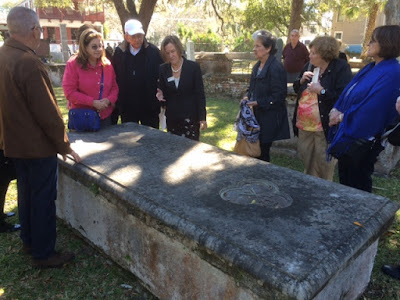 The group of alumni was delighted with their visit to the burial place of Fr. Varela.  They were accompanied by one of the members of the order, Fr. Mario Vizcaino, who is shown above standing to the right of Elizabeth Gessner while she tells the visitors about the tomb of Fr. Miguel O'Reilly, Felix Varela's first teacher.  They had earlier been received by St. Augustine Bishop Felipe Estévez with a talk about Fr. Varela.   The group is considering a contribution to the improvement of the lighting in the chapel, and possibly towards the purchase of some AV equipment, and they promise to return.

And finally…the Rotary Club!  The Rotarians came to place a plaque at Tolomato Cemetery commemorating their very generous donation to the completion of the new fence and gate.  St. Augustine residents who drive by the cemetery can watch it taking shape, and once it is finished and the fence is erected, the plaque will be placed on the fence to show the Rotarians’ concern for the beautification and preservation of historic St Augustine. We hope this will take place sometime in the next couple of months. 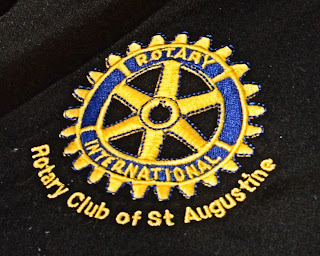 The Rotary Club of St Augustine came out to the cemetery after their monthly meeting to present the plaque to the TCPA and Fr Tom Willis, as the representative of the property owner, the Cathedral Basilica of St Augustine, for which Tolomato served as the parish cemetery until its closing in 1884.   Below we see Elizabeth Gessner, Fr. Tom Willis and Rotary Club members surrounding Katherine Battenhorst, who is holding the new plaque. 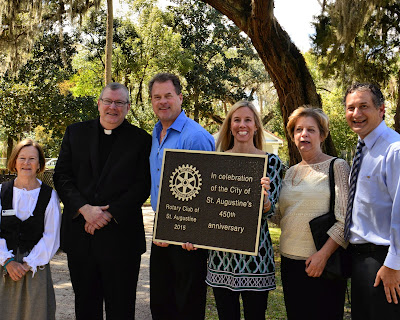 A little research showed how appropriate this project was for the Rotary Club.  The Rotary was founded in 1915 in Chicago by several local businessmen, and got its name from the fact that they initially rotated their meeting places between their different offices.  They were dedicated to the improvement of international understanding through commerce and intellectual exchanges. Their founding, of course, is well after the founding or even closing date of the cemetery, but the Rotary has a long history of connection with St Augustine. 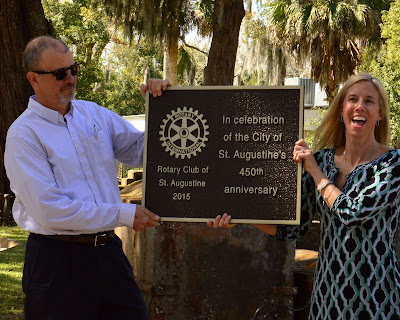 In fact, a Rotarian was one of the people most important in reestablishing St Augustine’s connection with Spain after the Spanish American War had left hostility between the two countries. Ángel Cuesta la Madrid, a Tampa cigar maker originally from Asturias in Northern Spain, birthplace of St Augustine’s founder, Pedro Menéndez de Avilés, was a Rotarian and even went on to found the first Rotary Club in Spain. But while in Tampa, where he produced the famous Cuesta-Rey cigars,it was his reconciliation project that eventually brought about the famous trip of St Augustine and US officials to Avilés in 1924 to receive the casket of Pedro Menendez.  The admiral had been reburied in another monument, and Spain gave his original casket to the City of St Augustine as a symbol of renewed friendship.  The casket is still on view in the Diocesan Museum in uptown St Augustine, and the Rotary is still helping St Augustine to discover, communicate and honor its history.

Posted by Elizabeth at 6:11 PM No comments: