Last week, I had to make an unexpected trip to Santa Rosa, California, and while there, I came across a completely unexpected cemetery.  Called the Santa Rosa Rural Cemetery, it is located in what may once have been a rural area, but certainly now appears to have been an established residential area for some time.  At first glance, it seems to serve more as a park for local residents than a cemetery – but as I wandered through this hilly, oak-tree covered refuge, I realized that it had indeed been a busy 19th and 20th century cemetery and in fact was even still in use as a burial place. 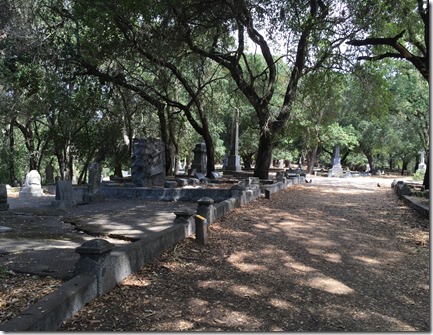 Santa Rosa is about 75 miles north of San Francisco, and the area was home to the Pomo Indians before the arrival of Europeans. Since the 18th century, there had been Spanish and Mexican ranchers in the area, which has its own Matanzas Creek – so named because the ranchers used to slaughter cattle at a point along the creek.  There were even Russians, strayed over from the Russian settlement at Fort Ross.  But the first formal settlement (1836) was the homestead of the Carrillo family, related to General Vallejo, founder of Sonoma and a man who had passed through three citizenships (Spain, Mexico and, finally, after California became a state in 1850, the United States) by the time of his death. 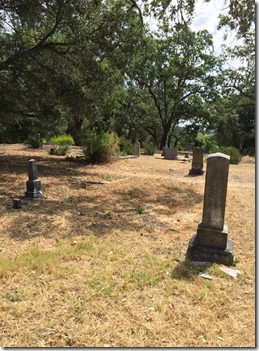 The town developed rapidly after statehood, and the cemetery was officially established in 1854.  It expanded and other adjoining plots of land were bought, although they were considered separate cemeteries and it was only sometime after the 1930s that they were all brought together as the Santa Rosa Rural Cemetery.  There are over 5200 burials, and the plots are mapped and identified. While the cemetery is technically closed, the families that hold original titles to the plots are allowed to continue to use it for burials.  Below is a modern marker. 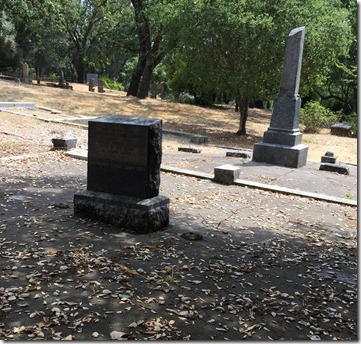 But the 19th century markers were the really interesting sights.  The cemetery has an unusual number of Civil War veterans, some of whom had volunteered from California and others who had emigrated to California from both North and South after the war. During the war, there was considerable conflict, although no fighting, in California between supporters of the South (who were more numerous in Southern California) and supporters of the Union. Most of the 160 or so Civil War burials are those of Union soldiers, although there are also about 15 Confederate soldiers buried at the Rural Cemetery.  Many of those buried here fought at Gettysburg, and a Gettysburg monument was even installed in the cemetery in 1910.  Tolomato visitors will recognize the old-style Veterans Administration marker belwo. 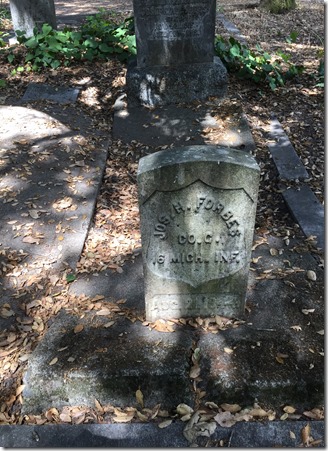 I was also struck by a very touching symbol that appeared on numerous markers: two hands clasping, sometimes in front of a cloud or nimbus-like shape.  This represented a farewell to earthly life and a welcome into eternity. 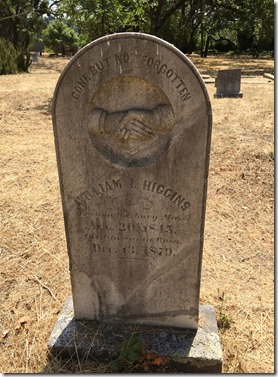 If you look closely, you will notice something that was not present on all of them and had a slightly different meaning. The cuff on the sleeve of one of the hands looks like a man’s shirt-cuff (sometimes even with cuff links!) while the cuff on the other hand appears to have lace or braid at the cuff, such as a woman’s dress would feature. This meant that the burial site was that of one or both of the members of married couple, with one of them welcoming the other to their reunion in their eternal home. 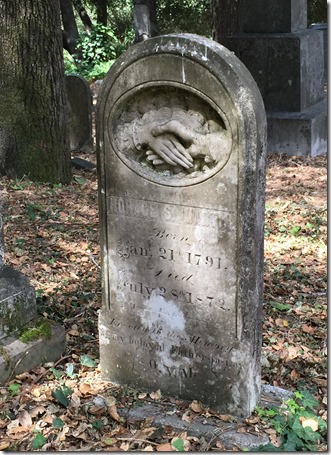 There were also lambs, birds and other symbols that had been meaningful to the families of the deceased, and I spent quite some time searching out the different symbols in the dappled light.  And I certainly wasn’t alone.  The cemetery was full of strollers, and on the way out, I discovered from a bulletin board set near the gate that it has a full program of activities.  Like Tolomato, it is maintained and curated mostly by a volunteer association, although the City of Santa Rosa helps with major projects.  And like Tolomato, it has docents – and some really neat activities! 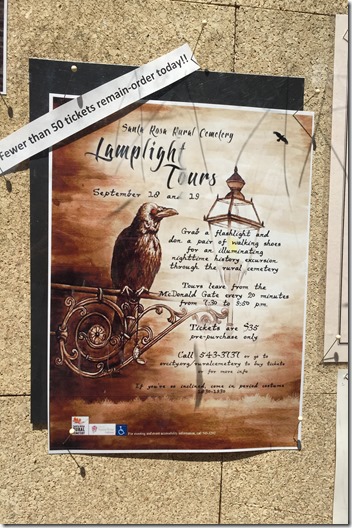 So, in the unlikely event that I have to go to Santa Rosa again, I plan to check out the Santa Rosa Rural Cemetery website first and see if I can fit in one of these tours.  And if you’re interested in knowing more about the cemetery, click on the link and you can see everything from little bios of interesting people buried there to a detailed plot map.  A highly recommended site! 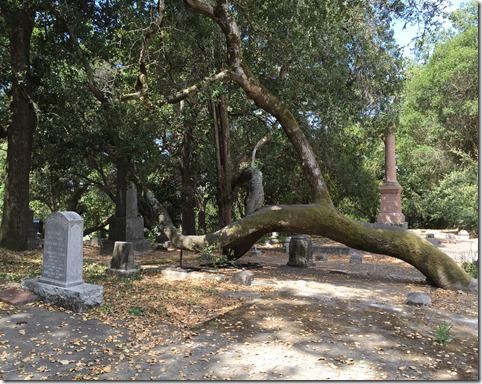 Posted by Elizabeth at 12:03 PM No comments: