In Rememberance of Minorcan Headstones

As everybody certainly must know by now, there are about 1,000 people buried in Tolomato Cemetery.  There are probably Christian Indian graves under the site of the ermita – or chapel – of Nuestra Señora de Guadalupe de Tolomato, but since we are not sure how many they were or exactly where the chapel was located, we can't include them in the count.  We really begin counting with the arrival of the Minorcans in 1777. 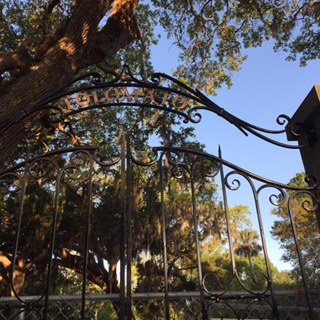 This group of several hundred people set sail from Minorca with to work on Dr. Turnbull’s plantation in New Smyrna Beach. After eight difficult years in New Smyrna, they rebelled against their mistreatment by the good doctor and walked to St Augustine.  Their priest, Fr. Pedro Camps, stayed to look after the sick and dying who couldn’t make the walk, and then joined them and lived in the house that is now the St. Photios Shrine, dealing with his “parish” of Minorcans and offering mass in the house. Under the British, who were Anglicans, there was no other Catholic priest in St Augustine, and Fr. Camps served both his Catholic and Greek Orthodox Minorcans.  Below we see the statue of Fr. Camps with some of his Minorcans that is in the west courtyard of the Cathedral Basilica of St. Augustine. 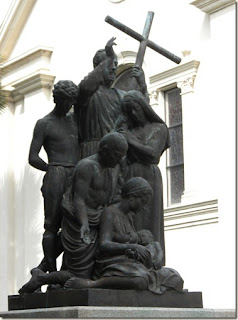 Needless to say, one of the first priorities was to provide a final resting place for his older or ailing parishioners, but this had already been dealt with by a delegation of Minorcans, including Juan Genopoly, Antonio Llambias, and Francisco Pellicer, who went to the British governor, Patrick Tonyn, and asked permission to bury the dead at the old Tolomato mission.  The site was not being used by the British, and the wooden chapel had been torn down and used for firewood in their first winter in St Augustine, so all that remained was the 4-story stone bell-tower and this location just outside the gates.  Governor Tonyn mentions that he granted permission for the Minorcans to use what he referred to as the “old Catholic cemetery” of Tolomato, and the abandoned space then entered into use as a cemetery.

The first burials were, of course, the Minorcans from Fr. Pedro Camps’ parish.  The first one of which we have a record is Gertrudis Pons, although the year of her record is given as 1784, which is the year that the Spanish returned to St Augustine. Obviously, in such a large group, many had died prior to that time.  Alas, the “Golden Book” of the Minorcans (so called because of its yellow cover), referring to the parish records maintained by Fr. Pedro Camps up to 1784, only lists baptisms and marriages, so we don’t have an accurate death record for the time prior to that.  However, Dr. Turnbull, feuding with Governor Tonyn for having accepted the Minorcans and, in Turnbull’s opinion, having encouraged their “rebellion,” states that some 65 of them died in the first two months of 1777.  While he may have been exaggerating – he is trying to claim that they lived better with him than when they got to St Augustine – it is no doubt true that a good number did die, which would explain the urgency of the request to use the “old Catholic cemetery.” 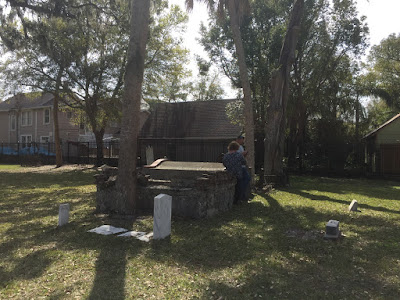 Unfortunately, there are no existing death records for the years between 1777 and 1784, so we have no way of knowing who they were.  Patricia Griffin, in her book Mullet on the Beach, points out that according to the baptismal statistics, births plunged in the first few years, meaning that it is possible that the population had also diminished.  And given the conditions and the poor health and stress of the Minorcan population, perhaps many infants did not even make it to baptism and would not have been recorded.

Still, from about 1784 onwards, with the return of the Spanish and the reestablishment of the parish church (now the Cathedral) under Fr. Tomás Hasset, who was succeeded by Fr. Miguel O’Reilly (both of them Irishmen in the service of Spain) , records resumed and we have a good idea of who is buried at Tolomato Cemetery.

Of the list, about 400 are from the original Minorcan families, but of course this does not count some of the descendants with non-Minorcan names who were the product of the complicated Spanish-Minorcan-Irish-British marriages of the time.  And remember:  a St. Augustine Minorcan can have a Greek name, an Italian name, or any one of a host of Mediterranean island names (Corsican, Sardinian, Sicilian, etc.), since Dr. Turnbull cruised through the Mediterranean picking up anybody who would go with him. Minorca is a tiny island about 130 miles off the coast of Spain, and because of the same war that made St Augustine British, Minorca was also under the British.  So it was a convenient place to collect the recruits for this New World venture. The result is that 55-60 percent of the original arrivals were actually Minorcans of Minorcan descent, but the remaining “Minorcans” were a pan-Mediterranean crew.  Below is the grave of a member of the Masters family, a very widely extended St. Augustine Minorcan family; the name is an anglicized version of the Catalan surname Mestres. 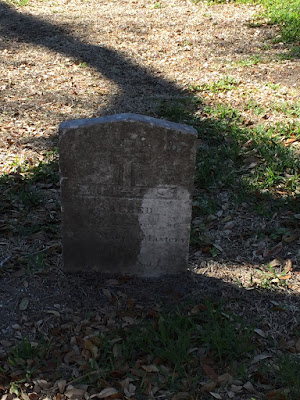 So what is there to see at Tolomato today?  There are only about 105 markers remaining at Tolomato Cemetery. Many of the 18th and 19th century markers were wooden and would have crumbled into dust long ago, while many other graves may have had no markers at all. It was the responsibility of the family to pay for this and also to maintain the site – the all-in-one “perpetual care” cemetery wouldn’t come along until the late 19th-early 20th century – and many people either couldn’t or wouldn’t – or, this being America, they had moved away.  In addition, there’s the usual cemetery wear and tear. Even stone or concrete markers fall over, they crack and crumble, or sometimes they are even stolen for other uses (garden stepstones used to be a favorite). 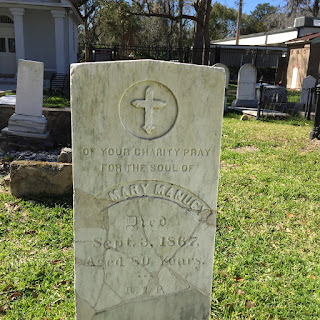 Nonetheless, of those 100 or so markers, we have about 30 that have distinctive, identifiably Minorcan names, such as the Manucy headstone above.

So we were delighted when the Menorcan Cultural Society wanted to have a find-a-grave event at Tolomato Cemetery in early March!  The trip was organized and led by Lea Craig, who had been recruiting visitors on the Menorcan Cultural Society Facebook page in connection with this month's Menorcan Festival at the Llambias House.  (Note that in this case, Menorcan is spelled with an e, reflecting the spelling of the island's name in Spanish and Catalan.) That event, with the requisite delicious perlau and chowder, was held on Saturday, and on Sunday, a number of out-of-town Minorcans who had stayed over came out to visit the cemetery. 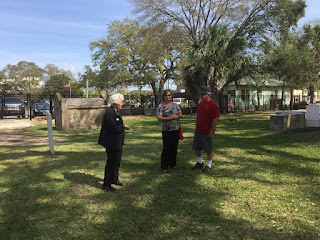 They were delighted to look at our records (and correct them from time to time!), view headstones that were those of ancestors of one or another branch of their family, and hear the story of the cemetery.  Many of them enjoyed talking with Louise Kennedy, above, who had prepared a list of Minorcan burials for the event. We had some Sanchez descendants.  Sanchez is a First Spanish Period name, but the patriarch of the family stayed in St Augustine during the British Period and had many children, who, of course, married Minorcans.  We had some Andreu’s, a  name often anglicized to Andrews, some Papys, some Miers, and some Pomars – and probably others that I missed, for which I apologize!

The photos below show you the marker that is embedded in the side of the Oliveros-Papy vault, while beneath it is the ledger stone of Pedro Benet. He was an important 18th and 19th century citizen who was from Minorca, and was known as the "King of the Minorcans."  However, he did not come with the Turnbull group but arrived separately, a few years later, and we have many Benets buried at Tolomato.  The Benet ledger stone once sat atop an above-ground vault, which crumbled long ago. 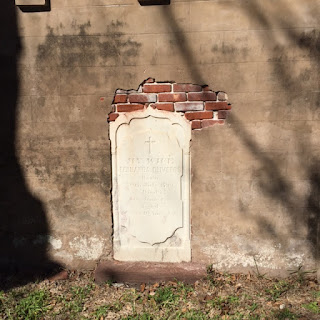 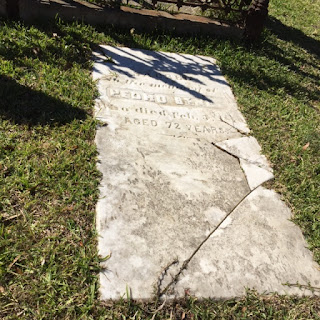 Louise Kennedy and Joan Roberts were busy as bird-dogs at the Genealogy Desk, and we captured a lot of great family stories to add to our records. Nick McAuliffe and Brooke Radaker took the Minorcan contingent on mini-tours to see the different Minorcan headstones. We had created a map and an alphabetized list, based on Matthew Kear’s invaluable thesis, In Rememberance (available from Lulu, the on-demand publishing site, for a mere $12.00), so that they could find the graves more easily.  Meanwhile, Janet Jordan and Don Roberts dealt with other visitors who weren’t with the Minorcan group, giving a few lucky passers-by entry to the cemetery for photos and stories.
We were hoping to add some family photographs or other records to our collection, but maybe next time.  We hope that this will be the first of many such events in partnership with the Menorcan Cultural Society. 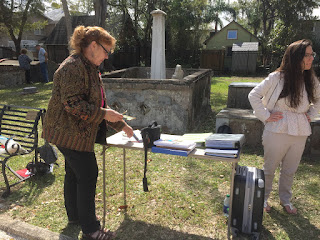 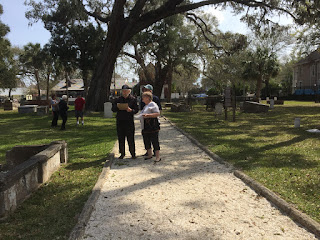