On Tuesday and Wednesday of this week, a small but hardy band (below) braved the biting insects and heat at Tolomato to work on some of the decayed masonry at the cemetery. Under the instruction of John Beaty (at right), a preservation specialist from the University of Florida who is doing his doctoral work on historic masonry and materials, TCPA volunteers Matt Armstrong and Elizabeth Gessner chipped out old mortar, mixed and applied new mortar, and tried their hands at applying new render (known as stucco to most of us) to the walls of a vault. 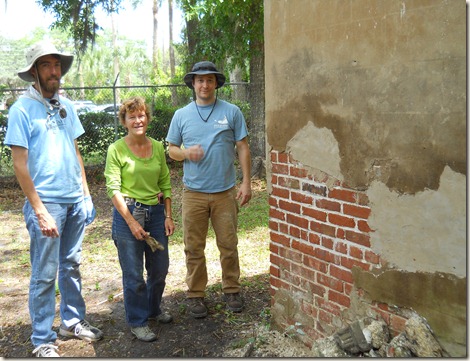 We are standing at the back of the Papy Oliveros vault.  Notice the condition of the mortar, which is probably over 100 years old.  The protective layer of render (stucco) has fallen off and the mortar has reverted to sand in some places and fallen out of the joints.  This means that the bricks will eventually come together again and the wall will be deformed and collapse. It has happened to other brick vaults at Tolomato. 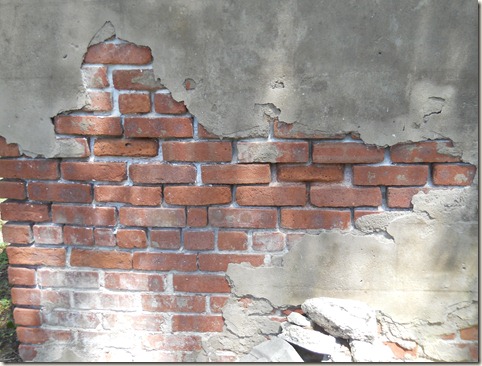 We cleaned up the mortar and repointed the bricks, using a lime and builders’ sand mortar with a pure hydrated lime purchased from a historic building materials company. Then we mixed a different mortar, using local sand from the “sterile layer” of soil, brought to us from an archaeological dig by Carl Halbirt, city archaeologist.

You will note that most of the vaults at Tolomato are covered with a render of a beige color, and since the color of the mortar is controlled by the color of the sand, we gave some thought to where we could obtain that kind of sand. John Beaty pointed out that people prior to the 20th century generally used whatever was closest at hand, since it was difficult and uneconomical to bring in building materials from elsewhere in those pre-railroad days.  Matt gave it some thought and recalled that St Augustine’s “sterile sand” was a reddish brown in color, so we made a quick call to Carl and got a bucket of sand.  And lo and behold, the match was almost perfect. Allowing for aging and darkening from decades of staining from water runoff, we had obviously found what they used for their mortar at Tolomato.  Below is a different section of the same vault, where you can see the finished result. The dark area is the result of wetting the surface to improve the adherence of the mortar. 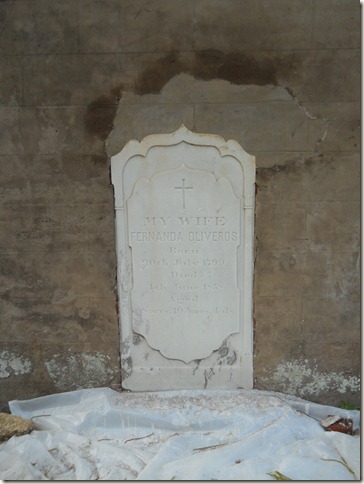 I’ll post more on the work that we did there. But in the meantime, Tolomato Cemetery and the TCPA owe enormous thanks to John Beaty, who spent some 20 hours over 2 days sharing his expertise with us and, of course, doing the skilled part of the work while we diligently tried to emulate it (with greater or lesser success).  But we have learned a lot, and even the work that has been done so far will ensure that this vault and the others we worked on will remain standing for many more decades than might have been possible otherwise.

Posted by Elizabeth at 6:26 AM