The TCPA members-only event began after a day spent anxiously watching the weather.  We got rained out last year – but fortunately, it didn’t happen again this year, and not a drop fell during the Torchlight Tour we had planned as a gift to our members and to the City of St Augustine.

The brave folks at the gate fending off the ghost tours and receiving the guests – our treasurer Janet Jordan, with her law enforcement brother Paul Jordan providing a firm presence while his wife, Debbie Jordan, also checked off guests – deserve particular mention for keeping everything orderly and smooth. The cemetery would have been the most crowded spot in St Augustine otherwise, particularly when passersby saw the torches lit and the docents in their period garb.  Janet and Debbie didn’t have to wear period dress…this year… 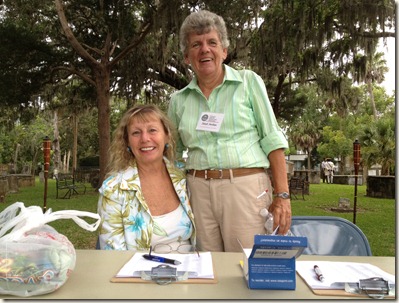 Priscilla de la Cruz greeted guests and roamed the cemetery taking the photos that you see on this page.

Mary Jane Ballou heroically played the harp for hours, giving guests a medley of Spanish, English, French and American music of the 18th and 19th centuries. 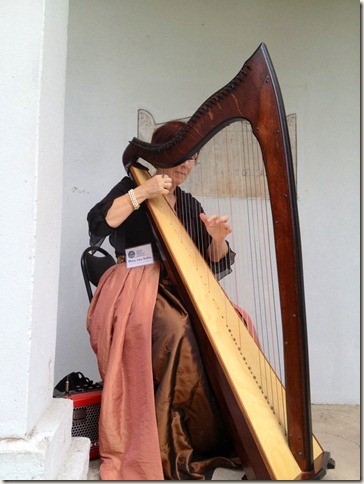 When the guests were all assembled, Elizabeth Gessner welcomed them and introduced Carl Halbirt, City Archaeologist, who gave a talk and explained our newest and oldest burial: that of the 16th century St Augustine citizens, possibly priests or people important in the Church whose remains were found during an archaeological dig on Aviles St. 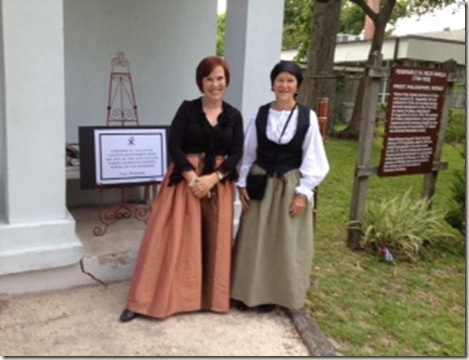 The text on the new marker is visible behind Mary Jane and Elizabeth. The plaque is not ready yet, but the remains were reinterred at Tolomato Cemetery on June 16 by the Cathedral’s pastor, Fr. Tom Willis, and there is a piece of coquina from the Cathedral marking their location. 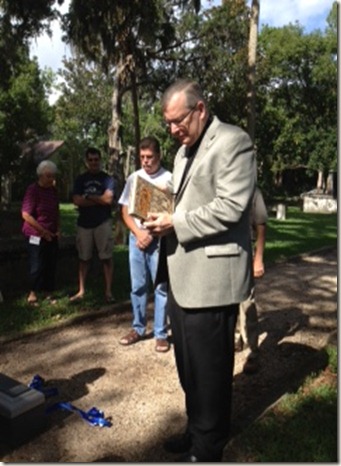 When Carl finished, John Cipriani, 18th century Spanish soldier, led the guests off by lantern-light to the 5 stops on the tour. He was as always an impressive figure and he came to us at Tolomato event though he had spent the entire day filling 750 rounds of shot and I don’t recall how many cannon rounds for the Fort Mose reenactment scheduled for the following day.  In this photo, he’s taking an 18th century photo of Mary Jane with his 18th century IPhone…well, maybe not. 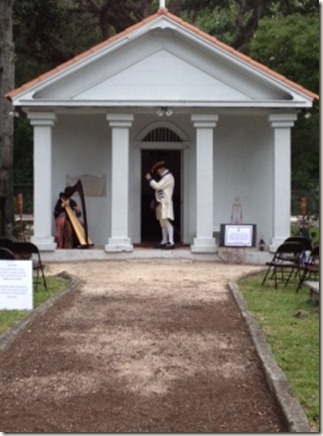 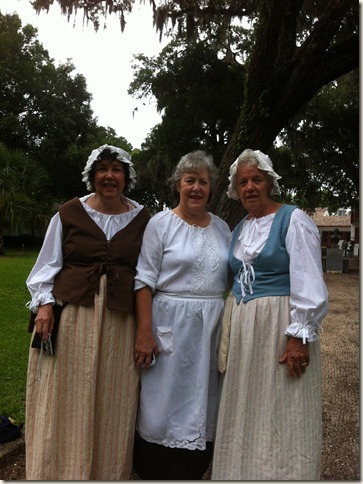 Carol was at the first stop on the tour and she made it all real to people by pointing out the Minorcan names and their connections with St Augustine here and now. Pedro Benet’s marker was illuminated and she recited part of the beautiful poem by Stephen Vincent Benet (American Names) which speaks of the “singing names” of the Minorcans. 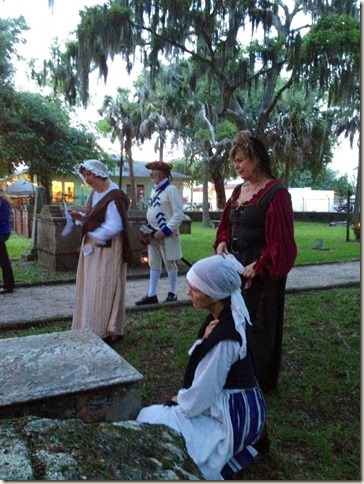 Our soldier then led guests to the next stop.

Sue Howden told Elizabeth Forrester’s touching story and recited the sad inscription on her vault, and then we had an unexpected treat when Dianne Jacoby and her troupe of reenactors came in and stood next to Sue at the tomb and did their interpretation of Elizabeth’s mother and sister lamenting her death. This is something they have done elsewhere, and it was a very dramatic moment for our guests. 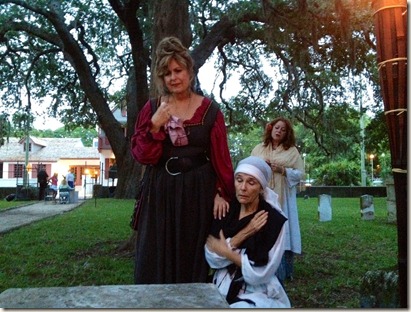 At the Verot tomb, Louise Kennedy gave guests a clear and dignified introduction to our first bishop, and then Sister Thomas Joseph McGoldrick, SSJ, accompanied by Sister Joyce, interpreted the site that marks the burial place of two of the original eight French sisters brought to St Augustine by Bishop Verot. Sister Josefa, SSJ, had found photographs of the two sisters, who died in the late 1860s within two years of arriving here, and Sister Thomas Joseph displayed them to the group. I had never seen the photos before, and we need to put them in our archives.  Alas, I don’t have any pictures of this stop, but perhaps one of our visitors will supply me with some and I will post them later. 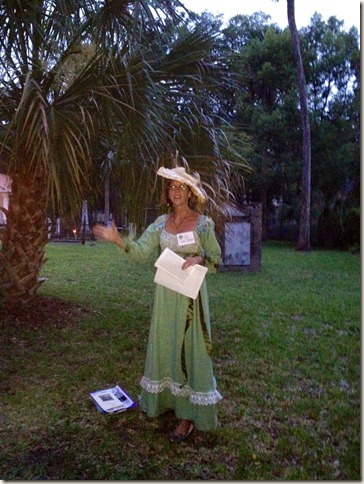 Then guests proceeded to our next site, the new Don Juan McQueen marker, where Sue Barrow, the great-great-great-great-granddaughter of John McQueen, told us about her illustrious forebear. Incidentally, she made her own 18th century English garb, which you see above, based simply on drawings that she saw on websites - and she did it in under a week. I think she may have a new career awaiting her… 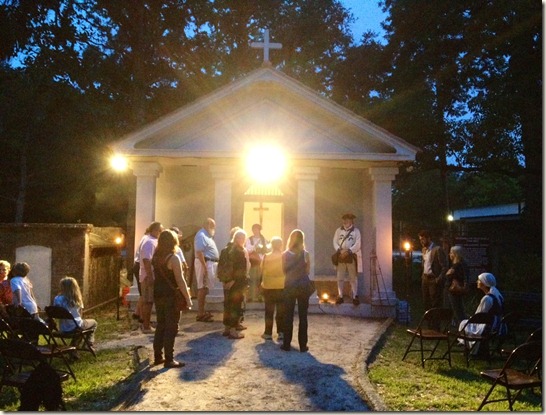 Finally, John Cipriani and Matt Armstrong (visible in the upper right) led the group to the Varela Chapel, where Elizabeth and Matt said a few words about Fr. Varela and the building. As you can see, it is a dramatic sight by torchlight (although I have to admit that much of the illumination in this photo came from the security lights on the roof). The interior was lighted by candles, just as it would have been in 1853, and the glow spread out into the night to bring this event to a wonderful close.

Posted by Elizabeth at 5:20 PM No comments:

The cemetery was open last Saturday and this time our visitors got something different: several of our docents had gone off to St Augustine Textiles on St. George Street and got themselves great new “old” outfits.

We’re preparing for our membership event this coming Friday, June 22, and one of our docents suggested wearing period clothing. The idea caught on and several of us went and got our outfits last week. Of course, we couldn’t wait until the 22nd to wear them.

Below are Louise Kennedy and Elizabeth Gessner, women of 18th century St Augustine (with what must be an 18th century I-Phone visible in the corner of the photo!). 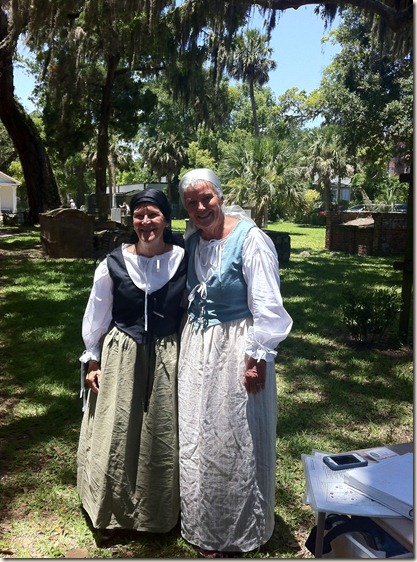 Posted by Elizabeth at 6:09 AM No comments:

The tireless Matt Armstrong was poking through an old bookstore in Savannah and came across yet another Tolomato postcard.  As usual, it was undated, although the information on the back at least identified the printer and the place of printing (Duval News Company, Jacksonville, Florida). 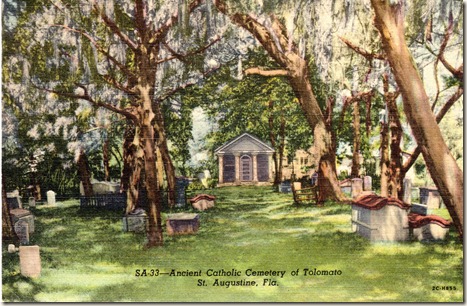 Some of the features appear little changed. We see the tomb of Elizabeth Forrester in the foreground, and the Varela Chapel, although with some slight differences from its current state, in the background. The area is covered with grass and it looks as if there is a wide path or cart track leading to the chapel.

But of course, who knows how accurate the artist was?  In fact, who knows if the colorist had even seen the cemetery? Very likely, he simply used his imagination when it came to adding color to the photo.  And, most frustrating of all, nobody has any idea when this card was produced. But maybe someday some dedicated Tolomato fan will track it down.