Something New in the Varela Chapel

Last week, we had a short but impressive service in the Varela Chapel, when the pastor of Holy Trinity Greek Orthodox Church, Fr. George Ioannou, and the pastor of the Cathedral Basilica of St Augustine, Fr. Tom Willis, participated in the installation of an icon given to the chapel at Tolomato Cemetery by the Greek church and the iconographer, Fernando Arango-Fernandez.  They are seen in the photo below, accompanied by a parishioner. 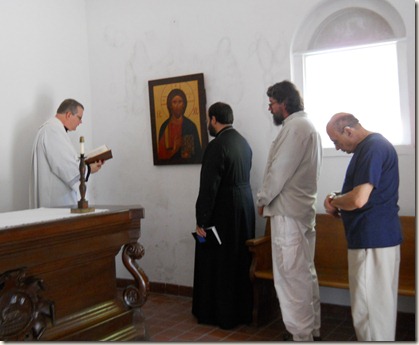 The icon is one known as Christ the Teacher, and it is beautiful and luminous.   It was placed on the wall on the north side of the altar, which is the 19th-20th century replica of the altar in Cuba where Fr. Varela celebrated his first mass. You’ll notice the holes and stains on the wall; these are from the time when Fr. Varela’s ledger stone had been attached to that wall, after his bones had been removed from the crypt and sent to Cuba. 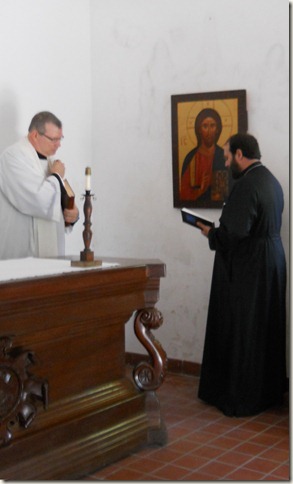 The icon reminds us of the numerous Greeks and Greek descendants who are buried at Tolomato Cemetery. The original band of weary settlers known as the Minorcans, who had been brought to Florida to work on an indigo plantation, were actually a pan-Mediterranean group that included not only people from the island of Minorca, but Sardinians, Sicilians and other Italians, and Greeks from two different parts of Greece.  The Greeks were fleeing not only poverty, but the Turkish invaders. The Turks forbade them to take any of their priests with them, so they were served by the Minorcan Catholic priest, Fr. Pedro Camps, and were part of that community. We will install the traditional icon lamp for it soon so that it will be more visible from the door of the chapel.   Visitors to the cemetery on Saturday, our monthly open day, were very impressed by the icon and wanted to know its story and the story of the Greeks at Tolomato.

Posted by Elizabeth at 8:33 AM