Pre-Holiday Clean Up and Cuban Doings at Tolomato

Saturday was a busy day! The usual wonderful group from the Flagler College Archaeology Club came out and got the prize: they cleaned more markers in one morning than any other group!  With their president, Elizabeth Valnoha, they cleaned a total of 8 markers. 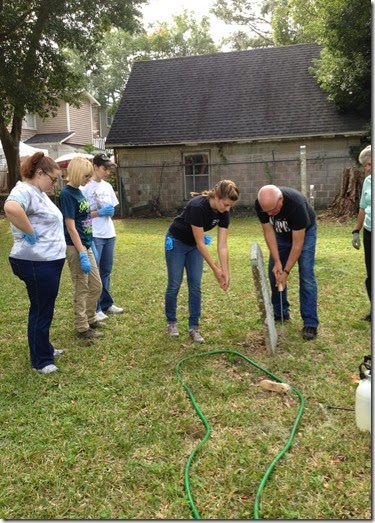 TCPA Preservation Committee Co-Chair Ray Hinkley, who has worked in historic cemeteries in New York, was there to show them the ropes. Ray and Archaeology Club President Elizabeth Valnoha started by probing the area, because there had been some discussion of straightening  one of the markers. But since the probes revealed that the marker probably has a large concrete base under it, which requires more people and possibly even machinery, we decided that it would be better just to clean the markers and plan a special day – with outside assistance – for straightening them. 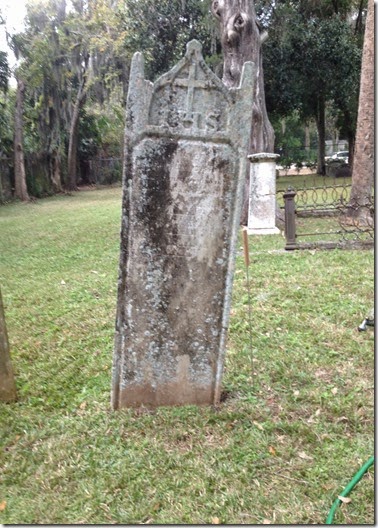 The marker above is that of the Irish-born Fr. Edward Mayne, who arrived in St Augustine in 1827 and died in 1834, probably of tuberculosis, after a few very stressful years as the parish priest of the parish that is now the Cathedral Parish (it didn’t become a cathedral until 1870, when St Augustine got its first bishop). 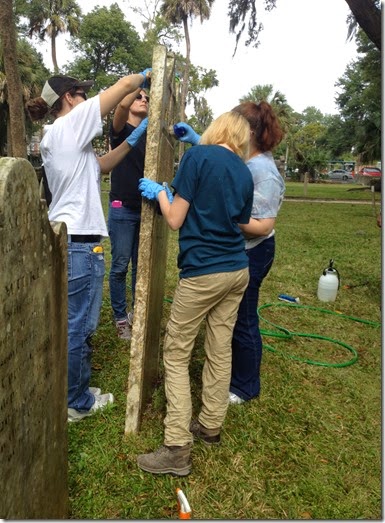 The club members – as seen below, Allison Struck, Andrea Broaderick, Shelby Schultz and Elizabeth Valnoha, with TCPA members Janet Jordan and Ray Hinkley standing behind them. – began work on it, and below we see the cleaned marker, which is legible again. The lichen and stains have been removed…but they’ll be back, alas.  This marker was cleaned only a few years ago, and had already become illegible when we started to work on it. In the photo, it’s still damp, but it will lighten, become more uniform, and the lichen will fade as it dries. 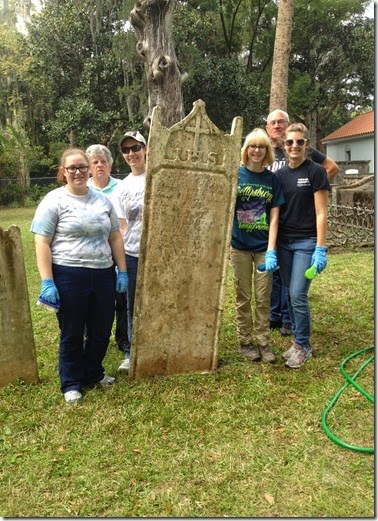 We cleaned several early markers – 1820s and 1830s – and a number of mid-19th century markers, including a marker for Jane Masters, a matriarch of the important local Masters family, which we hadn’t been able to read before.  It’s located at the east end, over the “door” of a ruined vault, and it turned out to have a long poem at its base. 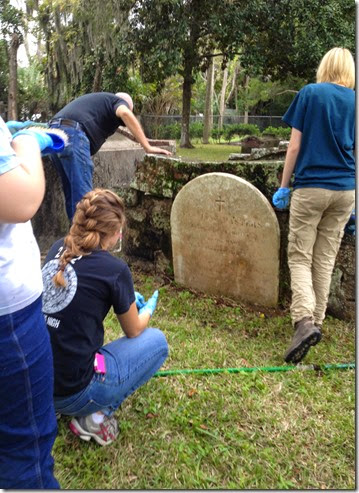 Janet Jordan, TCPA treasurer, took a break from her books to clean markers. This marker belongs to Margaret Weir, who died in 1869 and was the widow of Samuel Weir; the marker was placed by her son. 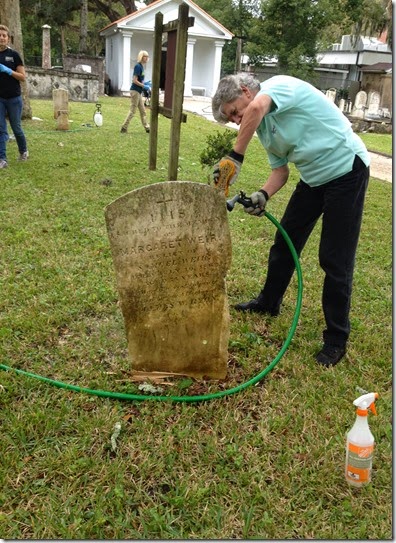 Just as we were finishing our cleaning, it started to rain….so we fled. But a small group of us came back a couple of hours later to welcome Jesus Permuy from Miami, along with members of two Cuban exile groups, one devoted to Fr. Felix Varela, and one that represents various Cuban municipalities,  They came to install a plaque in the form of a book, in Spanish on one side and English on the other, dedicated to the visit made in 1892 by Jose Marti to the chapel/mausoleum to honor Fr. Varela. 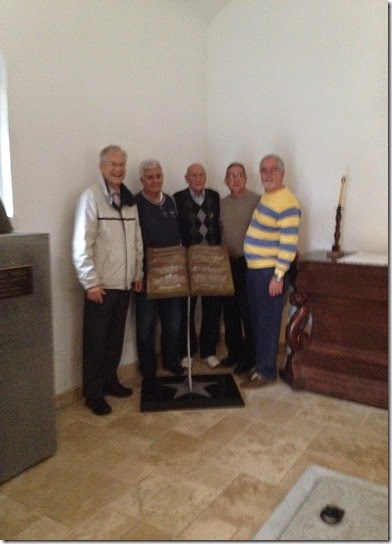 But more about that next time…Happy Thanksgiving, dear readers!

Posted by Elizabeth at 4:15 PM No comments:

Le Puy-en-Velay is a small city in the area of France known as the Haute-Loire, and used to be known for its lace making, although now its main industry seems to be tourism.  People come to Le Puy to start on the Camino de Santiago, which goes 763 kilometers to the Spanish border, or to ski or do some other strenuous outdoor activity in the surrounding mountains – or just to see this pretty town with its three famous volcanic peaks.  In fact, the word “puy” is an old French word meaning “peak,” and these three dramatic, narrow spikes (which are the necks of volcanoes, exposed by erosion) have been famous for millenia.  Nowadays, each one bears a religious shrine of some sort: the large red statue of Notre Dame de France on one, a very ancient shrine to the Archangel Michael on another, and the Cathedral on the third. I was in Le Puy in October, and I took this photo looking through the main door of the Cathedral, through which pilgrims entered, over the town of Le Puy as it rises up the sides of the peak. 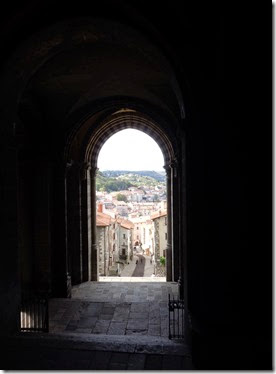 And here we see one of the peaks viewed from another peak. The large statue of Notre Dame de France, erected in the mid 19th century, can be seen from the steps of the 10th century chapel of St Michael, Chapelle Saint Michel d'Aiguilhe.  The latter word means "needle" or "peak." In the photo, tired tourists are puffing up the stairs after climbing the 620 steps to the chapel. 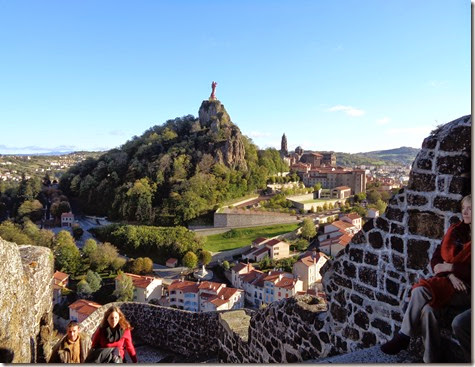 Fortunately, they can rely upon getting a wonderful dish of tiny lentils in some café when they descend, since lentils are another one of Le Puy’s special things, so special they even have their own “denomination of origin,” like a fine wine.  Or they could stop and buy a little bobbin lace, made with the bobbins and pillow such as those set out below in the local lace-making museum. 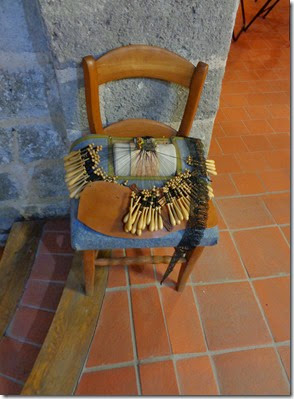 But what is the St Augustine connection?  And the Tolomato connection?


It begins with Bishop Augustin Verot, who was born in Le Puy in 1804, and ended his days in 1876 as the first bishop of St Augustine.  Just ten years before that, he had returned to Le Puy to bring a group of women religious, the Sisters of St Joseph, back to St Augustine with him to teach the children of the recently emancipated African Americans of the town.   Eight sisters accompanied him, barely able to speak English and having little more than good will and courage, and established their first little community and school in St Augustine in 1866, living and teaching in the house that had once belonged to Fr. Miguel O’Reilly on what is now Aviles Street.  Over the decades, they became a large order, teaching all over the state and working in hospitals, and now everyone in town knows their beautiful motherhouse on St George Street, which was designed by one of the sisters. 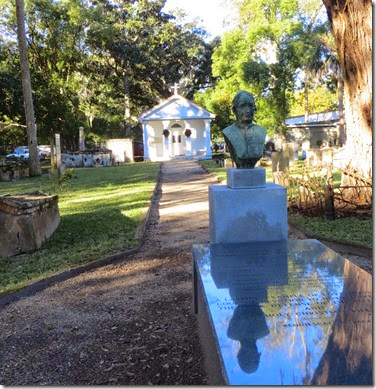 The order had been founded in the 17th century in Le Puy and was intended to be made up of small communities of devout women who lived together and served the poor in whatever way was necessary.  They supported themselves through donations and lace making, just as St Augustine’s sisters would do centuries later.  It was a successful model and had many members in the area, although like all religious orders in France, it suffered greatly in the aftermath of the French Revolution, when religious orders were dissolved and both priests and religious women were expected to sign an oath of subjection to the State.  The sisters were dispersed from their community, and in fact, several of them in Le Puy and Lyon were executed by the revolutionary authorities, either for refusing to take the oath or for sheltering priests who had refused to take the oath.  The peaceful tree below, with its plaque commemorating Le Puy’s war dead from the various World Wars and conflicts, marks the spot where the guillotine stood and where two of the sisters from Le Puy were beheaded in 1793.  The site faces the City Hall, where officials used to sit to watch the executions. The order was slowly reestablished after French life returned more or less to normal after the Revolution, and by the time Bishop Verot went back to Le Puy, he was able to get 60 volunteers who wished to go to Florida.  He took only 8, and of those original 8 French sisters, two are buried at Tolomato Cemetery. The others died after Tolomato closed in 1884, and are buried either at Mission Nombre de Dios or at San Lorenzo.  The marker below commemorates both of the sisters buried at Tolomato. 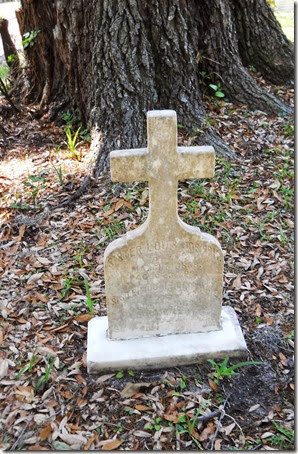 Walking around town, I came across a burial vault for some of the many Sisters of St Joseph (Religieuses de Saint Joseph) who did not go to Florida.  This large vault is one of three in the North Cemetery in Le Puy, which is closed, with the latest burials being in 2006. New interments take place at a new cemetery in the flat lands on the other side of the river that circles the peaks.  Family members have added the individual commemorative plaques and crucifixes and photographs. 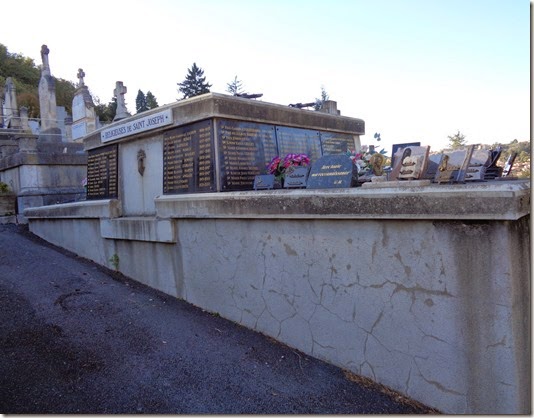 Notice the crucifixes lined up on the top of the vault, something that we saw on other tombs, too.  This seems to be a custom in this part of France, because all of the vaults and graves bore small – or sometimes large - plaques with personal inscriptions and sometimes a photo of the deceased.  It was a Sunday afternoon, and people were in the cemetery weeding, tending their family graves, and cleaning the plaques. 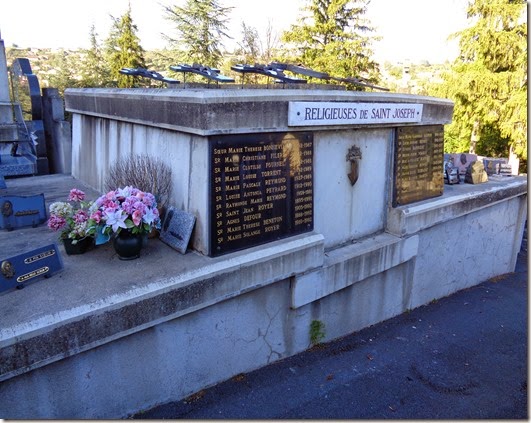 Visible from this hilly cemetery was one of the other peaks, the peak where the St Michael Chapel is located, watching over the town as it has done for over a thousand years. 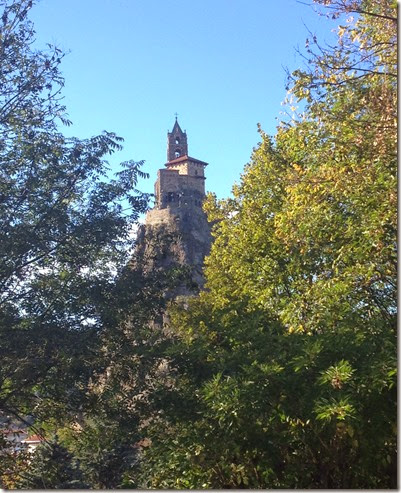 I imagine that those 8 French sisters who set out for the unseen land of Florida, almost 150 years ago, took one final look at the beautiful peaks of their city and then prayed that St Michael would watch over them on this journey – a very successful one, it turned out – into the unknown.
Posted by Elizabeth at 7:40 AM No comments: