In the world of cemeteries, “descendants” are, naturally, people descended from other people buried in the cemetery. Often they are interested in the graves of their ancestors and will take a major role in restoring the cemeteries where they are buried.

Here we see a slightly unusual descendant:  Sister Thomas Joseph McGoldrick, SSJ (Sisters of St Joseph), cleaning a marker dedicated to two of the original French sisters who founded the order here in St Augustine in 1866. 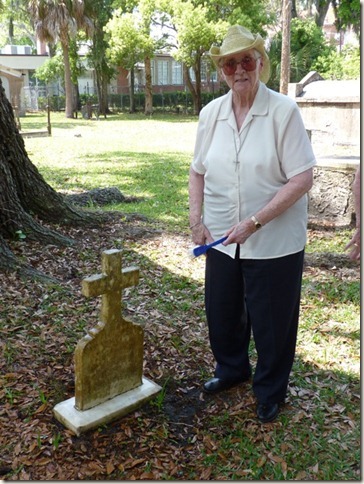 The marker commemorates Sister Louis Joseph and Sister Julie Clotilde, both of whom died in 1868. The SSJ had been brought here in 1866 from Le Puy, France, by our first bishop, Bp. Agustin Verot (who was also from Le Puy) to dedicate themselves to the education of the children of the recently emancipated African Americans.   They ran a free school for the latter children which they funded with a “finishing school” for well-off girls from the Northeast and Cuba, and eventually went on to set up a parochial school system that covered all of Florida.

Sister Louis Joseph (also known as Marie Joseph) was the first of the SSJ to die in the New World, and her funeral procession was led by black women mourners, who reminded the other mourners that the SSJ had come here to work with the African American residents of St Augustine and therefore it was most fitting for the black women to lead the procession.  This was quite radical in the strife-torn Reconstruction South. 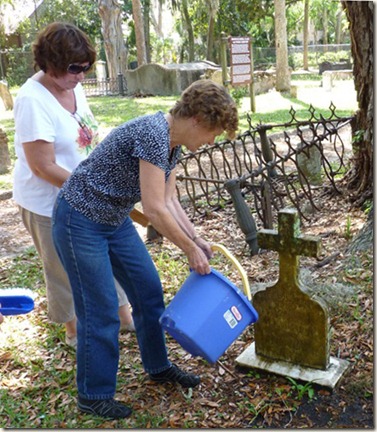 Above, Lin Masley and Elizabeth Gessner pour water on the stone, wetting it down before Sister Thomas Joseph goes to work on it with her bottle of D/2 solution and her brush.  Getting water at the cemetery is a problem but fortunately the neighbors let us run a hose to their well, so we are able to get enough water to do projects like this.

Below we see the cleaned marker, which has just dried and will lighten over the next few days. The marker is heavily stained because it is under an oak tree, and the acidic water and sap running off the tree are destructive to stone. The D/2 will discourage biological growth for the next year or so and will assist in protecting the stone from the destructive effects of the tree under which it is located. 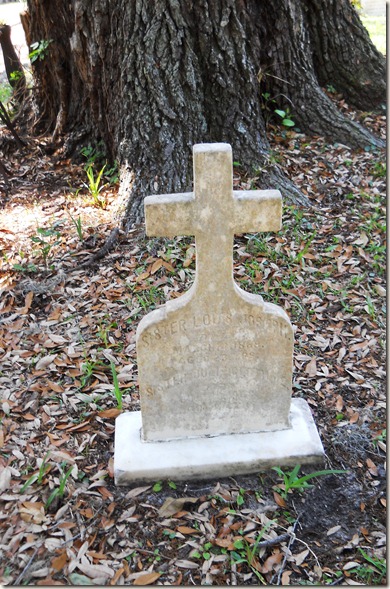 Posted by Elizabeth at 4:02 PM