I’m in New Orleans for a few days, and of course I thought I’d visit their historic cemeteries. But the cemetery I wanted to see is reputedly so dangerous that visitors are encouraged to go only in the company of a tour group, and there is no tour planned until later in the week…so I took a walk through the French Quarter.  And what did I see? 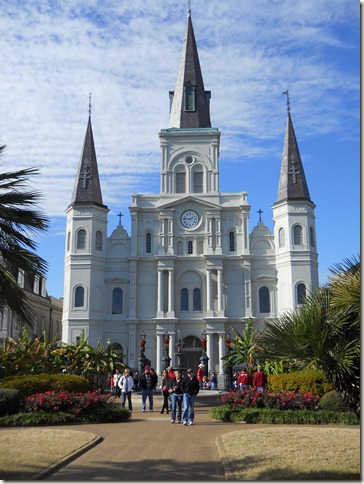 The beautiful St Louis Cathedral.  And in it? 18th and 19th century burials in the Cathedral. 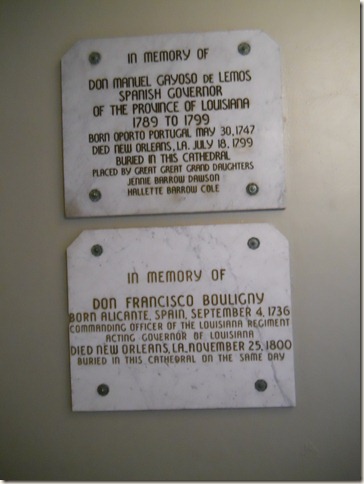 These reflect Spanish burials from New Orleans’ Spanish period (1765-1803), but I think I also glimpsed some plaques representing French burials. People buried in the churches at that time were usually especially important people, in this case, governors and military officials.  Spain officially stopped burying people under the church floors in about 1788, but obviously the news hadn’t made it to the colonies – or perhaps it was such an established practice that the law was meaningless.

As we all know, there are 3 people buried under the floor in the Cathedral of St Augustine:  Miguel Isnardy, who was the general contractor and died around 1800, and Fr. Pedro Camps and his successor, Fr. Narciso Font, Minorcan priests who were first buried at Tolomato and then reinterred in the Cathedral around the time that the building was completed (1797, although evidently work continued for a few years after its official dedication).

Posted by Elizabeth at 3:53 PM