Most of the existing markers at Tolomato Cemetery are carved tablets, usually of marble, although other materials appear. The one that is unique is the marker of John and Mary Reyes and Mrs. Mary Ponce, also known in the cemetery inventory as “No. 86.”  It’s made of a material referred to by its manufacturer as “white bronze” – which was actually plain old zinc, but just sounded a little classier. 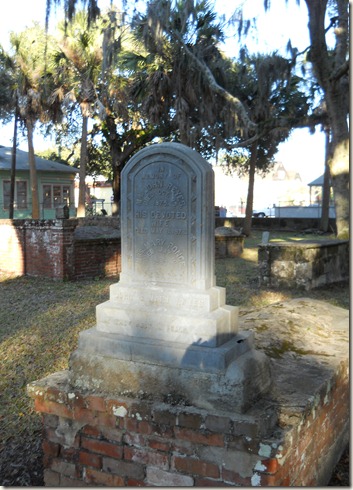 The marker surmounts a brick barrel vault; most of the vaults at Tolomato probably had tablets on them originally, but many of them have disappeared over the years and the inhabitants of the vaults are no longer identified.  This one, however, was particularly durable. 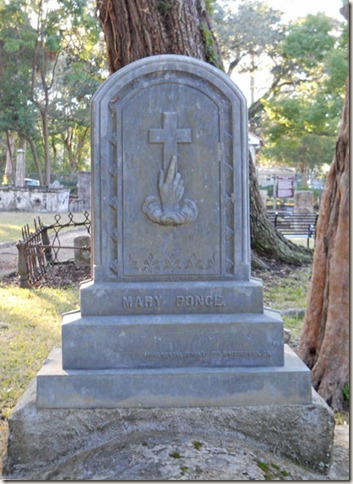 “White bronze” was made and marketed by one manufacturer, the Monumental Bronze Company, of Bridgeport, Connecticut, starting in 1879.

The technique for making the white bronze markers was actually developed in 1873. It involved using a full-size wax model to make a plaster cast, which was then cut into sections and used for casting the zinc. The zinc sections were fused together with melted zinc, producing a hollow monument. In the case of the Mary Ponce marker, the name is cast as part of the marker, but separate nameplates could be screwed on if there were subsequent burials under the same marker. The Monumental Bronze Company closed in 1939 and manufacture of this type of marker seems to have ceased.

John Reyes died in 1875, his wife died in 1876, and Mrs. Mary Ponce died in 1883, just before the cemetery was closed to burials. We assume that the marker was put up shortly after her death. 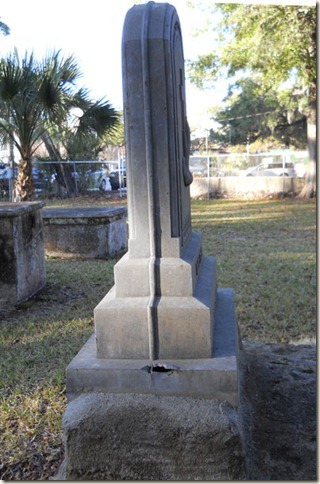 As you can see, there is a hole in the base of the marker. This is dangerous to the marker, since it permits water to enter and will degrade the zinc.  We hope to have it repaired.

Matthew Kear, in his thesis In Reverence, explains the marker very well. He writes: