And You Think Tolomato Has Problems…

On the last day of my stay in New Orleans, I decided I had to do the tour with the Save Our Cemeteries  (SOC) guide, so I went back to St. Louis No. 1.  The guide, a volunteer named Adam who is also a professional tour guide elsewhere, was great and it was a factual but entertaining tour.

The SOC group has about 30 docents, many of them professional tour guides, who lead trips to two of the historic cemeteries, St Louis No. 1 and Lafayette. The tours last one hour and cost $12-15 dollars, with the money going to their preservation funds. I didn’t have time to get to Lafayette, but visiting St Louis No. 1 with an SOC guide definitely made up for it.  Here is Adam with a “table tomb.” 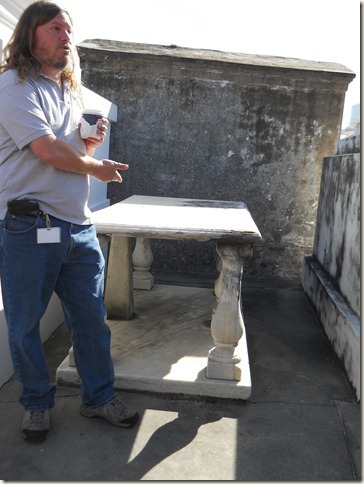 One interesting difference between the St Augustine cemeteries and the New Orleans cemeteries is that the latter are still open and still have burials. There is a great deal of public access as a result, and since there is no permanent caretaker or guard stationed there, visitors occasionally run riot.

Below is the tomb of Marie Laveau, who is known as the “voodoo priestess.” This is despite the fact that her obituary, which was published in the New York Times when she died in 1881, highlighted her life as a good Catholic and woman known for her charity to Church causes. Whatever the true story, obviously the “voodoo priestess” shtick attracted more tourism, and that has been the focus for many a long year now.

People come out to visit her tombs and leave trinkets. But they also scrawl three x’s on it, despite the fact that this amounts to desecration – this photo was taken only a couple of weeks after one of the SOC volunteers had repainted the tomb and left it sparkling white. 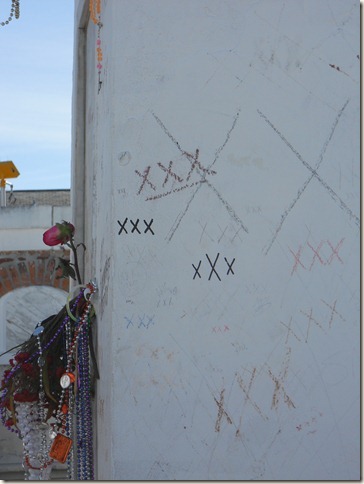 The wall vault below is decorated on a regular basis by a man whose grandmother – if I recall correctly – is buried there. He changes the décor to fit the season. 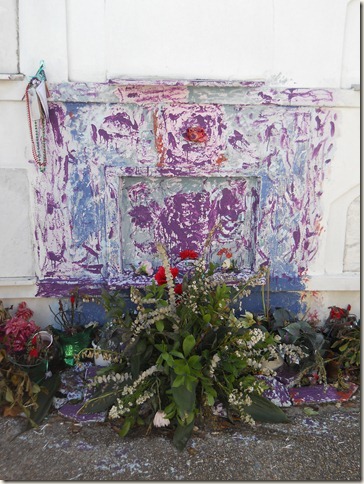 There are, of course, the usual results of neglect, in the case of families who have died out and left no one to maintain the tomb.  There has also been vandalism and the theft of artifacts for the purpose of selling them. And we can’t forget the rather lurid scenes from Easy Rider that were filmed at night – without the knowledge of the Archdiocese – in St Louis No. 1.

But probably one of the oddest is the tomb of the actor Nicholas Cage. No, he’s not dead yet, but he recently built this hulking pyramid with its Latin motto (meaning “all comes from the one”) so he’d be ready when the time came.  Fortunately, a celebrity construction is one thing we don’t have to worry about at Tolomato. 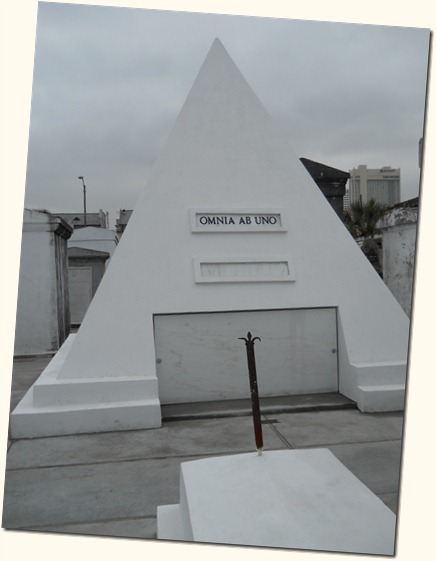 Posted by Elizabeth at 7:19 PM