When you walk around a cemetery, you can look at the grave markers to get a sort of capsule biography of the people buried under them:  the name, dates, usually a religious symbol and sometimes a few words from a grieving family member.   Sometimes you can imagine a little bit about them from these words.

Military markers are much less personal and just tell you the equivalent of name, rank and serial number. Well, maybe not the serial number, but certainly more information about the deceased’s military service than anything else.

Take a look at the marker below, one of our Confederate markers commemorating a man who fought in the Confederate army.  This is one of several markers placed by Colonel John Masters, a member of the Sons of the Confederacy, in the year 2000 to mark the burial place of some of St Augustine’s Confederate soldiers.  It is a Veterans Administration marker and reflects the current format for such markers. 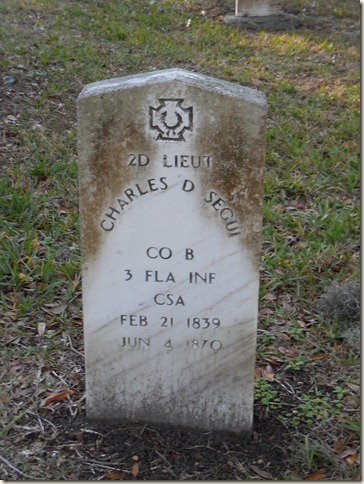 We see that it belongs to Second Lieutenant Charles D. Segui (the latter is a Minorcan name). Above his name and rank is what is referred to as the Southern Cross of Honor, originally created by the Congress of the Confederate States in 1862 and intended to be the equivalent of the US Medal of Honor.  It is now approved by the Veterans Administration for placement in the “symbol of belief” area of the marker, which is usually for religious symbols, and can be placed on the marker of anyone who served honorably in the Confederate Army.

Underneath, we see the abbreviations indicating that he was in Company B, 3rd Florida Infantry, Confederate States of America.

And last of all, his dates.  Charles Segui was only 31 when he died, but it was several years after the Civil War ended, so we know that he was not a battlefield casualty. And other than the above details, we learn nothing more about him:  no wife, no children are listed as grieving for him; no parents as having predeceased him; no hopes of Heaven or fond remembrance. But what we see is really the sum of what we know about anyone buried under a military marker.

Posted by Elizabeth at 3:54 PM