Last week, Flagler College hosted an excellent conference on the Franciscan missions, directed by the Franciscan studies scholar Dr. Timothy Johnson, with a focus on the little-known Southeast missions.

The Franciscans arrived in Florida in the 16th century, after both the Jesuits and the Dominicans had failed to establish viable missions.  With their usual Franciscan practicality, mildness and hard work, they were able to build a chain of missions from North Carolina to Alabama. The Southeast missions were destroyed by the attacks of British colonists from South Carolina and Georgia in the 18th century.  Florida’s mission chain was already gone by the time the California mission chain was initiated. 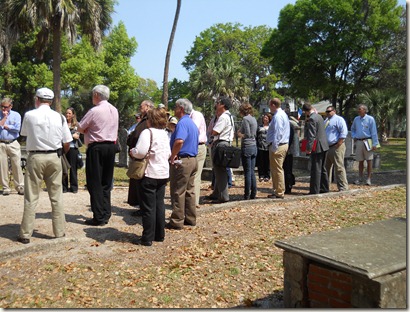 Above, we see a group of conference attendees, including a Franciscan friar, listening to a talk on the history of the Tolomato Indian village. Tolomato was one of five such villages in St Augustine.  They were known as “refugee” Indian mission villages, since they were populated by Indians of various tribes who were fleeing the attacks of the British in the northern and western part of Florida and Georgia.  The villages were served by the Franciscans from the convento that is now the St Francis Barracks. All of the residents of these villages left for Cuba with the other Spanish citizens in 1763. 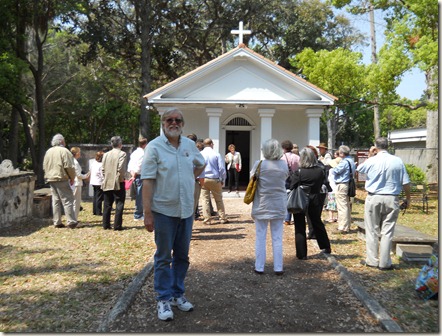 Here we see the City Archaeologist, Carl Halbirt. Carl has done some archaeological exploration in the parking lot and area immediately behind this chapel, which is where he believes the greater part of the village was located.  He hopes to get permission to do more digging on that site in the future.

And for you Franciscan historians out there: one thing that could be a really wonderful contribution to our knowledge would be a comprehensive, detailed history of the Tolomato mission, starting from its beginnings in Georgia.  The information is out there, but it is scattered and needs to be assembled into a coherent whole that could give us insight into this period and its personalities, conflicts and achievements.

Posted by Elizabeth at 6:39 AM