We’ve had a busy week at Tolomato. We were open to the public last Saturday (don’t forget, we’re open every 3rd Saturday of the month) and had 359 visitors!  But we started off with a special group: our Haitian friends from Miami, who were in St Augustine to discuss plans at Fort Mose for a monument commemorating General Biassou and the Haitians in St Augustine. 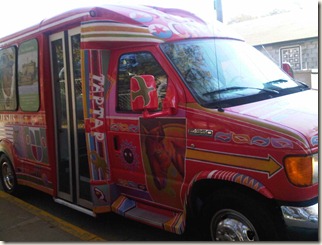 They arrived in their beautiful bus (typical of the jitneys that transport people around Haiti). Here we see General Biassou on the side of the bus, along with scenes of Fort Matanzas and Gen. Biassou’s house in St Augustine. 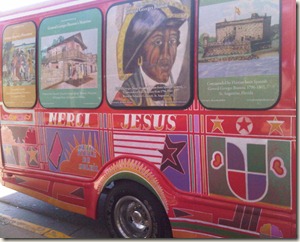 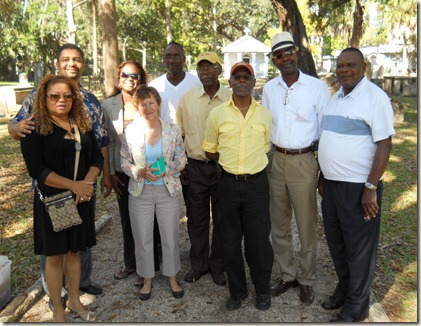 The delegation stayed for about an hour and were accompanied by City Commissioner Errol Jones (in the yellow shirt).  Some of the visitors had been to Tolomato before, but there were others for whom it was a first visit, and as usual, the new visitors were amazed by the depth and richness of our shared history at Tolomato.

Only a few days later, we had another, very different group:  the Florida Public Archaeology Network sponsored a “Lunch and Learn” event at the cemetery.  We gave a tour to the group of some 70 people who showed up for the event, which is designed to acquaint people with little known local archaeological activities.    The hit of the show was Sarah Miller and the Ground Penetrating Radar device. 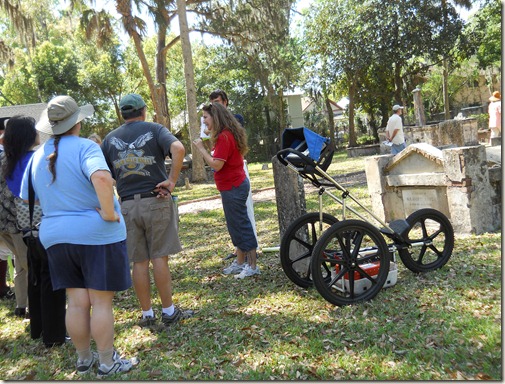 Sarah has done two surveys of parts of Tolomato and the area behind it (which we believe to have been the site of the mission Indian village).  The first one, done in 2008, located some shallow “anomalies” in the ground that were probably the sign of gravestones that had fallen over and been buried under the grass, as well as some deeper but regularly spaced objects that were probably burials that had lost their markers or never had them to begin with.

GPR relies on the detection of differences in density; when the signals encounter an object denser than the earth, they bounce back and create an image. As long as the bones are solid and have not crumbled into something similar in density to earth, they will reflect the signals, so these deeper objects were probably burials.  They seemed to have been closely piled on top of each other, and we know that the earlier practices relied on “reusing” graves with successive burials. These people were probably buried in wooden boxes or, in the case of some of the earliest burials, perhaps in shrouds.

Later burials in metal or part metal caskets make it even easier. And of course, one of the other things we are looking for is the elusive foundation of the 18th century chapel for the mission Indian village of Tolomato. Sarah thinks they may have had some luck in the parking lot behind the Varela Chapel, since they have found a linear anomaly that may be a stone foundation. But then again, it could be a utility pipe…stay tuned for more information as it emerges!

Posted by Elizabeth at 6:51 PM