The graves at Tolomato Cemetery bear witness to the many different individuals and groups who have played their part in St Augustine’s history. But one that is often overlooked is the grave of Rev. Louis de Gonzaga, a Christian Brother who died in 1861.

Three Canadian members of the Christian Brothers, a teaching order, were brought to St Augustine by Bishop Verot in 1859 to run a school for boys. They lived in a house on Charlotte St. on the lot directly behind the modern Cathedral Parish School and ran their school in the building.  Below is what is thought to be a photo of the building, possibly taken in the 1870s.  The building was later used by the Sisters of St Joseph as their early school and residence shortly after they arrived in 1866.  After the Civil War, a number of recently emancipated African Americans settled in the area around the school.

The stay of the Christian Brothers in St Augustine was brief.  The Civil War broke out in 1861, and St Augustinians feared that their town would be targeted by Union troops because of its importance as a supply depot. Most of the boys in the Christian Brothers school were from the local area, although there were some who were boarders and had come from Georgia and more westerly areas of Florida.  The brothers were afraid that the older boys would come to harm if the town was attacked by Union forces, so they closed the school and made arrangements to get the boarder boys back to their families.

They left for Jacksonville on the train, and stayed with the boys for a couple of days until their families could pick them up or they could be put on trains headed for their homes.  Then the Brothers themselves left Florida and returned to Canada and New York.

Except for one:  Brother Louis.  He died on July 17, 1861, probably not long before the Brothers left for the North, and was buried at Tolomato Cemetery. He was 35 years old.

Just a few days ago, his grave received a visit from members of his “family,” the Christian Brothers.  Brother Timothy, from Louisiana, and Brother George, from California, were in St Augustine for a conference and came to visit Tolomato.  Here they are with the marker of Brother Louis, which as you can see is not very legible anymore. 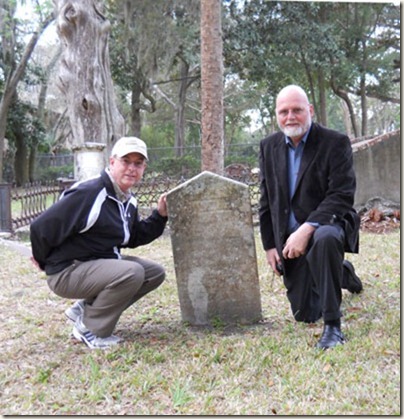 But fortunately Matthew Kear painstakingly transcribed it, and below is the text:

J.M.J.
Erected by the Catholics
of the city of St. Augustine
as a Tribute of respect for
the memory of Rev. Brother
LOUIS of G[onzaga] of the Order of the Brothers
of the Christian Schools
who departed this life July 17,
1861 aged 35 yrs. & 9 mons.
May he rest in peace. Amen.
Hail Mary.

Posted by Elizabeth at 6:46 PM