The cemetery was open for visitors last Saturday, and since we will not be open on Memorial Day, one of our members, Ray Hinkley, took advantage of the time to set out American flags in front of the markers of our veterans...of many wars.

Going chronologically, of course, we start with the American Revolution.  We did a longer post on this a couple of weeks ago, so you will probably remember that Florida was actually under the British during the period comprising the American Revolution (1775-1783). In fact, the reason the British left St Augustine, which they had gotten away from the Spanish in 1764 as a result of the French and Indian or Seven Years War, was the American victory and the terms of the Treaty of Paris in 1783.  This required them to surrender their territory in the new United States and return territories taken from other colonial powers to their earlier owners.  Thus Florida returned to Spain, and was Spanish for another 40 years, until it became a US territory in 1821. 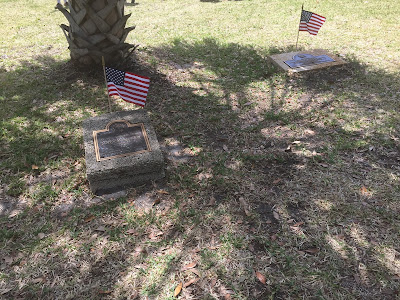 So there were no battles here and no American soldiers here, but some of those buried at Tolomato Cemetery nonetheless did participate in the American Revolution, so we felt they deserved commemoration.  Above you see flags in front of the DAR markers for don Juan McQueen - who, as a merchant captain with business interests in Paris, carried secret letters back and forth between General Lafayette in France and General George Washington - and Juan Francisco Ruiz del Canto, who provided crucial information and aided Spanish Governor Bernardo de Gálvez in the crucial 1781 Battle of Pensacola, which kept the British from taking over parts of the lower South.  Spain had become an ally of the Americans in 1779 and at that point possessed Louisiana and had a regiment based there. Gálvez defended or took Baton Rouge, Natchez, Mobile and Pensacola, and was considered so important by George Washington that he invited Gálvez to march at  his right hand in the grand parade in Philadelphia on July 4th, 1783.  Below, reenactor José Gueits appears in an 18th century Spanish uniform such as Gálvez' men might have worn. 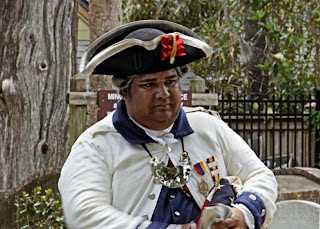 We couldn't find anyone buried at Tolomato who had participated in the War of 1812, during which time St Augustine was Spanish, so we had to jump ahead to the Civil War. 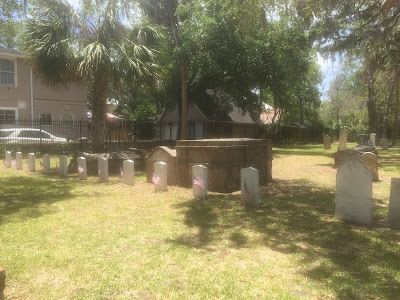 And here we have both sides represented: above we see the markers for the Confederate veterans buried in the cemetery (although not in those exact locations).  Colonel John Masters of the Sons of the American Revolution made it his life's work to find unmarked Civil War soldier graves throughout Florida, searching through burial records and VA records, and then obtained and installed VA markers for them. These markers were installed in the year 2000.  The names on them are old St Augustine names, some of them Minorcan names while some of them, such as Bravo, are even First Spanish Period names.

The other side of the Civil War also appears in the two markers below, one for Frank Papy and one for Hector Adams.  They were both members of a regiment of the USCT, or US Colored Troops, units opened by the Union Army for the recently emancipated African Americans; sometimes these vets are referred to as the Freedmen.  This particular regiment was originally from South Carolina, but the recruiting station was at the Castillo, and Frank Papy, a waiter, joined when he was 19 while Hector Adams, a wagon driver, joined at the age of 50.  We know a fair amount about these men from their VA records. 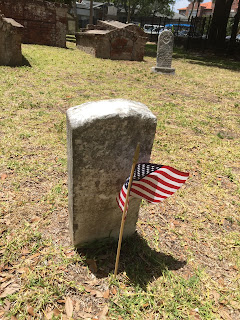 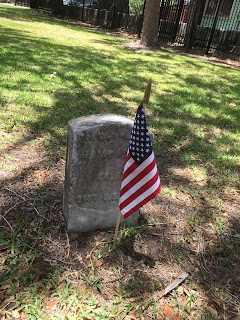 St Augustine had a number of other Freedmen, and there are more burials at the Mission Nombre de Dios, which was used as the parish cemetery during the 15 or so years between the closing of Tolomato Cemetery in 1884 and the opening of the current Catholic cemetery of San Lorenzo in 1898.

And finally, since Tolomato closed before any of the "Great Wars" of the 20th century, we have a veteran who died far from home, Patrick Keenan, born in Ireland. He joined the Army in Pennsylvania during the Civil War but remained in the service as Regular Army and was stationed with the 5th Regiment here at the Castillo.  He died of tuberculosis in 1877 at the age of 33, and his fellow soldiers in his new home provided this stone for his grave.  The inscription reads: "This Stone is Erected as a Tribute of Respect by his Comrades of Battery K, 5th Artillery." 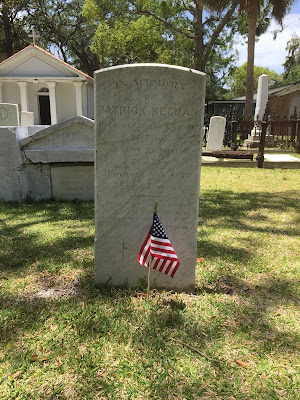 Posted by Elizabeth at 1:22 PM