Tolomato Cemetery and the American Revolution


The Daughters of the American Republic (DAR) recently gathered again at Tolomato Cemetery  to dedicate the marker of a DAR American Revolutionary War Patriot - that is, a DAR member's ancestor who participated in the American Revolution in some way - buried in the cemetery.  The first commemoration, you will recall, was for Don Juan McQueen, who was from South Carolina but spent much of his life in St Augustine and is buried at Tolomato Cemetery.  He aided the American side by carrying messages from General Washington to General LaFayette in France when he made merchant voyages back and forth to Paris. 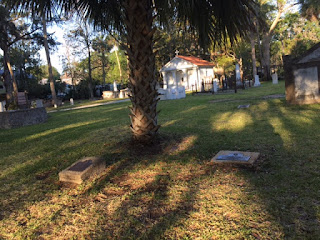 But now we have a very different story.  The DAR's honoree this time was Juan Francisco Ruiz del Canto y Escalona, a Spanish citizen born on Spanish Street in St Augustine in 1730 during the First Spanish Period.  He was of Spanish descent on both sides, although his mother was a 6th generation St Augustinian.  Above we see all of our "Revolutionary War" corner, with markers for Don Juan McQueen, Francisco Sanchez (near the vault on the right) and our newest marker, for Ruiz del Canto.

Juan Francisco Ruiz del Canto was responsible for the supervision of the Castillo de San Marcos, and when the Spanish left St Augustine in 1763, he was appointed by the Governor as one of the group of three Spanish citizens who oversaw the mapping, sale and settlement of Spanish properties with the incoming British.  One of the other members of this little group was Juan Jose Elixio de la Puente, famous for his 1764 map of St Augustine.  Below, Elizabeth Gessner stands with a group of "Spanish soldiers" wearing uniforms of the First and Second Spanish Periods (1565-1763, 1784-1821). 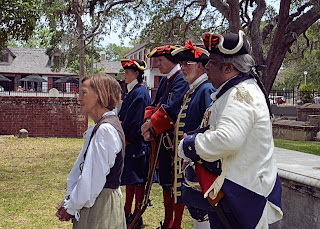 Ruiz del Canto made many trips from Cuba to St Augustine for these purposes and also had many contacts among the local Indian tribes, which enabled him to dissuade the Indians from supporting the British in the growing conflict and secure their neutrality.  In 1779, Spain joined the American side in the war against the British and Ruiz del Canto served with the Spanish.  In 1780, he captured a small British sailing craft and took its captain and crew as prisoners to Cuba.  When interrogated by the Spanish, the captain, British Captain. Robert Holmes, revealed information about British troop locations and naval presence in Pensacola. This proved crucial to the planning of the successful Seige of Pensacola by Spanish General Bernardo de Gálvez.  The re-taking of Pensacola by Spanish forces - which included a regiment from Majorca and one of the Hibernian (Irish) Regiments under the command of General Arturo O'Neill - drove the British out of West Florida. At the end of the American Revolution, the area was returned to Spain, which granted Americans access through it to the Mississippi River.  Below you see the reenactors as well as members of the current Spanish military hold the flag of the Louisiana garrison, since Louisiana was Spanish at the time of the activities of Ruiz del Canto. 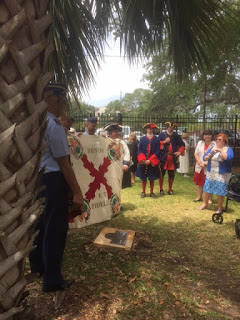 Our DAR patriot made his way back to St Augustine after the Spanish returned in 1784, settling with his second wife Francisca de la Hita Salazar (also St. Augustine-born) and their children first in a house on Hospital (now Aviles) Street and then on St George Street, in the Avero house, which is now known as St. Photios Shrine and had been the residence of Fr. Pedro Camps after the Minorcan arrived during the British Period.

See how well everything ties together in our complicated past! 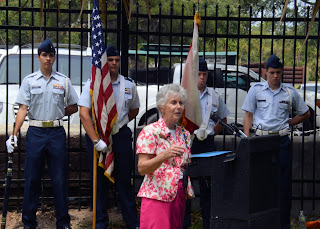 The research on Ruiz del Canto was done by the  very gifted and dogged historian for St. Augustine's Maria Jefferson DAR Chapter, Lynne Cason, shown above in front of the honor guard as she tells the story of Ruiz del Canto.  When the DAR decides to dedicate a marker, they do extensive research on the honoree, and in addition, find a DAR member descendant to represent him. In this case, they found Teresa Sardinas, shown in the photo below, who came up from South Florida to be present at this honor.  She is sitting with representatives of the Spanish military, who came from Tampa to be present at this recognition of Spain's aid to the nascent US during the Revolution. 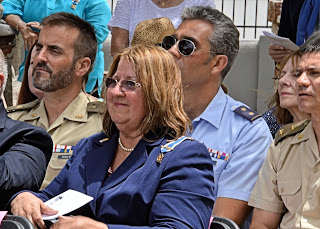 The DAR had members from the local and far-flung chapters in attendance for this important event.  It was a very photogenic and well attended event! TCPA Secretary Louise Kennedy took most of the photos in this post, and others were taken by member Joan Roberts. 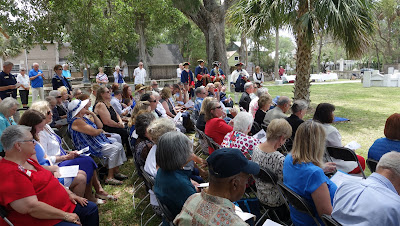 Because of the military importance of Juan Francisco Ruiz del Canto's actions, there was a delegation of Spanish military representatives in attendance.  Here you see Lt. Colonel Gonzalez Prada addressing the crowd with some interesting details of Spain's activities during the American Revolution. 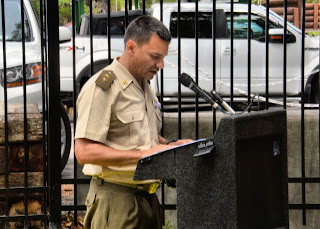 The DAR had also invited "representatives" of the Spanish military of the past:  two groups of reenactors. Dr. Warren Feldman and Jason Davis were our First Spanish Period soldiers, while John Cipriani and Jose Gueits Romero represented the Second Spanish Period. 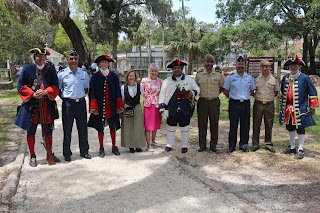 Fr. Ed Booth, a longtime friend of Tolomato Cemetery, gave the invocation and blessed the marker.  Here he begins the prayers as Teresa Sardinas waits to unveil the marker (under the blue tarp). 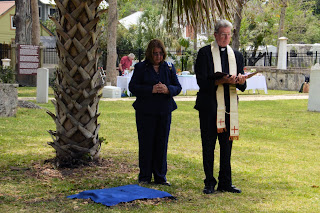 The American Revolution took place during the British Period in St Augustine, so of course St Augustine had no participation on behalf of the American side.  In fact, it functioned mainly as a prison for Americans captured at sea or in battle further north.  They were held in the Castillo or under house arrest at various other points around town.  But the Treaty of Paris that ended the Revolution required England to vacate territory it had gotten from other colonial powers, and Florida then reverted to Spain for another 40 years - which allowed our Revolutionary Patriot to return to St Augustine, live out the rest of his days here (resuming his work at the Castillo), and be laid to rest in Tolomato Cemetery in 1802, over 200 years ago. 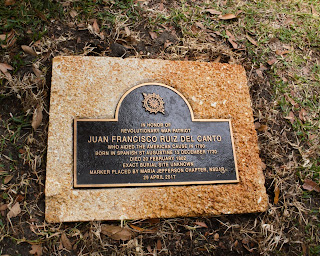 Posted by Elizabeth at 3:49 AM