Occasionally we travel beyond our humble one acre at Tolomato to view the spreading cemeteries of other countries - or, in this case, of our own American West.  And even though we spent several hours at the 285 acre Fairmount Cemetery in Denver, Colorado, which includes an enormous public mausoleum, seen below, we visited only a fraction of its monuments. 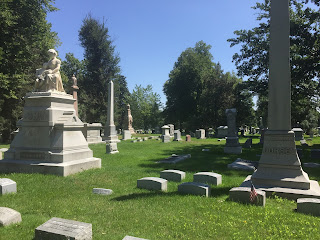 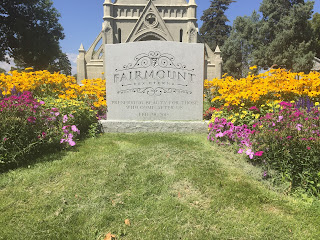 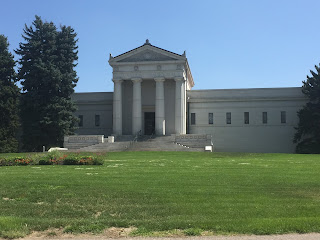 Fairmount Cemetery as such was founded in 1890, but was in use well before that as the City Cemetery, founded in 1858 and incorporating yet another cemetery, Mount Prospect.  Its first burial was James (Jack) O'Neil, who died in 1859 in unfortunate circumstances, shot to death in a gambling argument. This was the Wild West, after all. Note that his gravestone, below, proclaims that he was MURDERED. 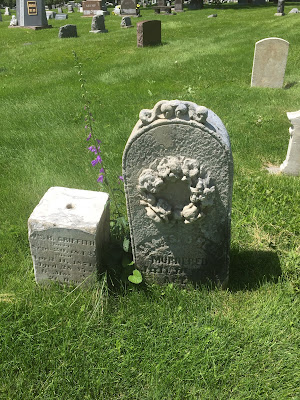 Perhaps because of burials such as this, the City Cemetery developed an unsavory reputation, and, as boom-town Denver became more prosperous and home to some very wealthy people, city fathers urged the founding of a beautiful "garden cemetery" in the style inspired by Paris' famous Pere Lachaise.  A new cemetery was founded on the site in 1890.  It incorporated several other cemeteries, and some burials were moved to Fairmount while others were moved away, and some of the burials from Denver's earlier cemeteries were left in place - under land that is the site of the Botanic Gardens and various local parks.

A German landscape architect, Reinhard Scheutze, was hired to design it and created a vast, rolling park that now has some 3,800 trees and thousands of markers and monuments.  The style in 19th and early 20th century Denver, oddly, was very French influenced, and many of the mausoleums and markers of the prosperous reflect this or display a Classical theme.  Anybody who was anybody  in Denver is buried here, and the names - Bonfils, Cheesman, Boetcher, among others, can be seen on the streets and important buildings of Denver. 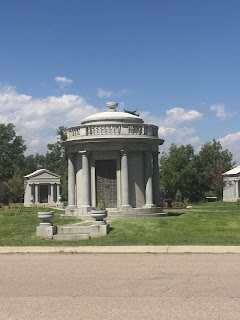 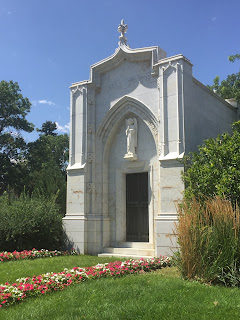 Burials from the 1920's and 30's are often Art Nouveau in style, while some adopted the "Egyptian" style made popular after the discovery of King Tut's tomb in 1922. 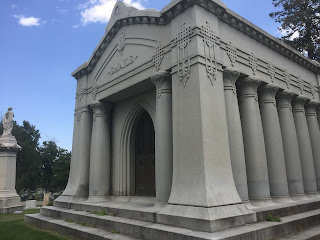 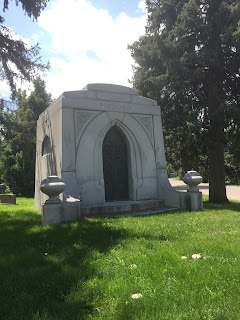 And then there was the mausoleum, with its hundreds of niches and vaults - and the largest collection of stained glass in Denver!  An interesting fact was that in recent times, people had decorated the niches of their deceased with little personal items, such as eyeglasses or some other favorite or typical thing. These are called "grave goods" by scholars, and now appear even in niches holding cremated remains. 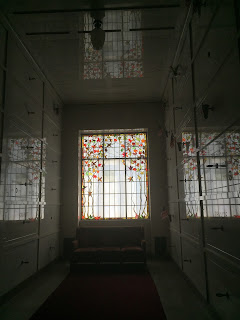 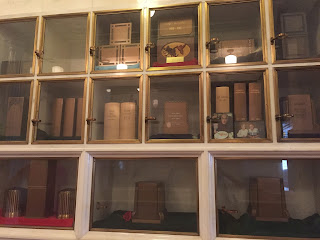 There were a couple of "markers" of truly monumental simplicity:  huge boulders of rough pink granite from the Rockies, such as you see below: 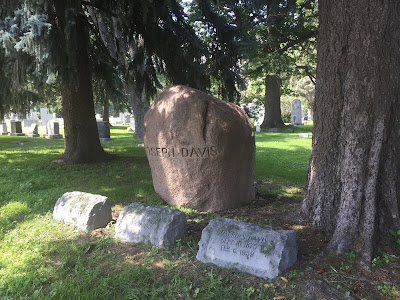 However, one of the most interesting things was the marker and monument of J.A. Falkenburg, founder of the Western branch of that famous insurance and burial society, Woodmen of the World. You may know them from their tree-trunk shaped markers, which can be found in virtually any cemetery in the country. 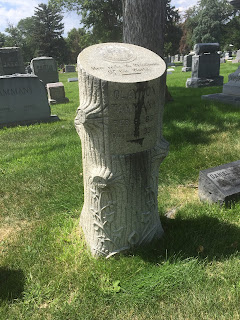 You can read the rather complicated history of the Woodmen here at the blog A Grave Interest, but suffice it to say that none of it would have happened without Falkenburg, shown below. But no tree trunk!  It looked as if the front of his granite plinth may once have had a tree-trunk fastened to it, or at least a plaque featuring their slogan, Dum Tacet Clamat, "Though silent, he speaks," but it was obviously lost at some point in the past and only a few bolt-holes remain. 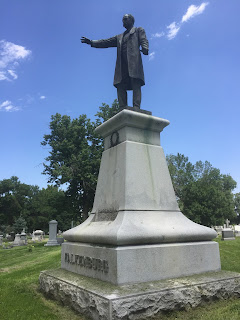 But all throughout the cemetery, trunks of varying sizes, styles and materials appeared, reflecting the many forms this enduring symbol has taken over the years. In addition, there were more graceful markers with the symbol of a bird and a trunk - for the women's branch, the Women of Woodcraft. Perhaps these form the best monument to J.A. Falkenburg. 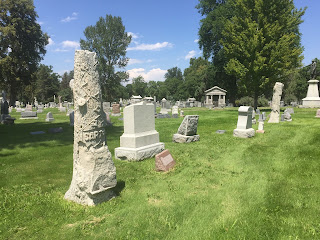 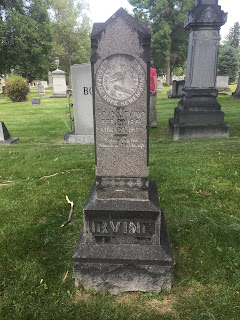 Fairmount Cemetery is open for visitors at any time, and in addition, has a full schedule of tours and events sponsored by their volunteer group, the Fairmount Heritage Foundation.