One of our visitors, Joyce Peterson, member of a local camera club, sent us some photos she took on our most recent Visitors Day.  Starting off the collection is a photo of the marker on the Sabate vault, which as you will note has the latest marked burial at Tolomato.  The cemetery officially closed in 1884, but a few burials were conducted (officially or unofficially) in later years, and this one is dated 1892, making it the last recorded burial at Tolomato. It is in the east wall of the vault. 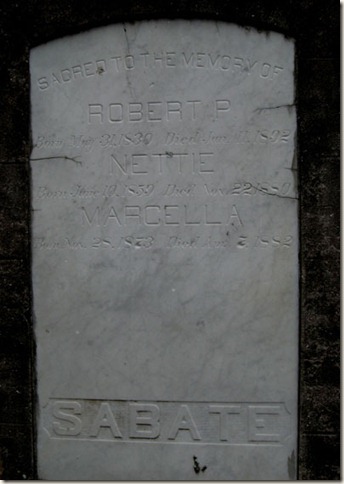 Next we see a photo of what looks to me like the vault of Fr. Michael Crosby, one of the early pastors of what is now the Cathedral.  Look at the moss on its east wall. 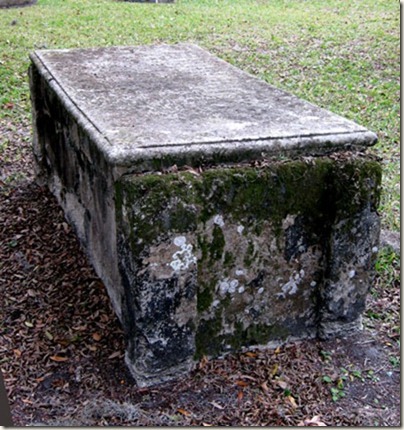 And finally, we have a tree run amok. This is a cypress that has burst through and taken over a cast iron grave enclosure.  There used to be many cypresses at Tolomato and they appear to have self-seeded in inconvenient places over the years.  In addition, some of them were probably intentionally planted near graves but were not pruned or maintained and eventually took over the space.  The cypress was a popular cemetery planting because of its somber color and romantically twisted branches; it is also a Florida native plant, and grows heavily throughout Florida without any outside encouragement. 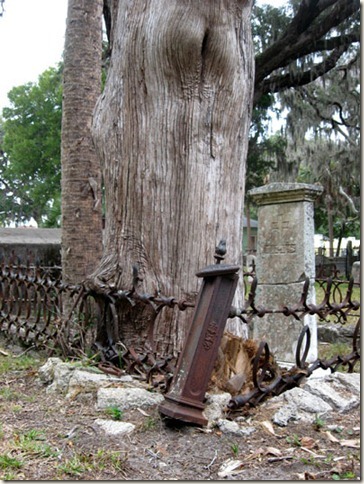 Photographers are always welcome at Tolomato Cemetery.  One local camera club had even planned a night shoot at Tolomato, but unfortunately it was one of our recent icy nights and none of us were willing to brave the cold.  Perhaps the club will try again in a more temperate season and I’ll have some nighttime shots for you.  In the meantime, many thanks to Joyce for these photos!

Posted by Elizabeth at 5:22 AM