One of the interesting things that emerged during our first visiting day on November 20th was the great local interest in Eugenia Price’s historical novel, Maria, published in 1977, and its connection with Tolomato Cemetery.

Many of the historical figures mentioned in the novel are, in fact, buried at Tolomato.  Unfortunately for fans of Maria, virtually all of them have lost their grave markers, if they ever had them, and the exact locations of their graves are unknown.

Mary (Maria) Evans, for whom the book is named, was originally from Charleston and arrived in St Augustine with her husband during the British Period.  However, she stayed on during the Second Spanish Period and dealt with virtually all of the important or at least memorable people of that time, including Jesse Fish, Governor Zespedes, and of course, numerous Minorcan families whose names are still familiar to us. 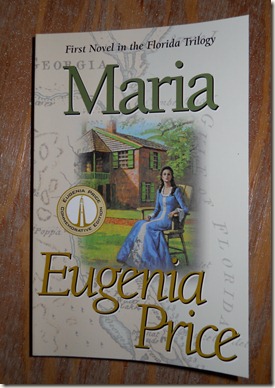 We hadn’t even considered Maria when we were planning the tours, but we now realize that the subject is of great interest and we’ve got to include it more prominently. Our docents are going to be busy reading (or rereading) Maria in preparation for the next tour.

Posted by Elizabeth at 6:12 AM