Here’s a tranquil shot of the Mission grounds one recent evening.  You can see some of the many gravestones in the background. 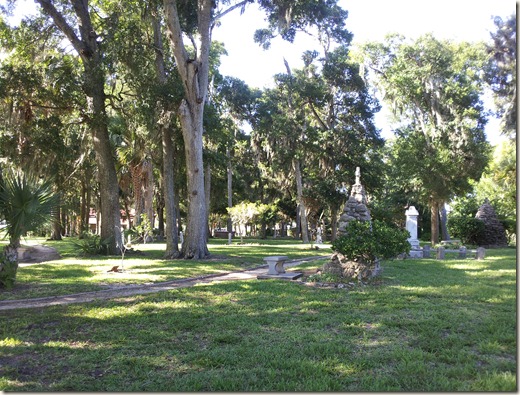 There are a number of headstones there and probably even more burials that are no longer marked.  The site, of course, was not always a cemetery, but was the area where Menendez landed and where the first chapel was built.

After Florida became part of the US, the government seized certain Church properties, declaring that they had been owned by the Spanish Crown and were thus to be handed over to the US.  Lawsuits followed and eventually some of the properties were returned to the Church, but the Mission passed into private hands and was used by a local farmer for grazing his cattle.  Seeing the ruins of an old chapel that stood on the spot, the farmer decided to return the property to the Church and sold it to the diocese for $1.00.

It was the site of several restored chapels after that time, and entered into use as a sort of “overflow” cemetery in the late 19th century.  Looking at the gravestones, I was a little puzzled, however, since it is commonly thought that all burials at Tolomato, the Huguenot Cemetery, and the Mission ceased in 1884 at the orders of the City of St Augustine.  While we know that the first two cemeteries had an occasional burial after this time, most of the markers at the Mission appeared to date from about 1885 through the early 1890s.  So obviously, post-1884 burials must have been permitted at this site.

A mystery. I will have to find out more about this.  Anybody have any ideas?