Another sighting of Fr Felix Varela was reported by TCPA member Nick McAuliffe, who came across this Cuban stamp somewhere in his internet wanderings. 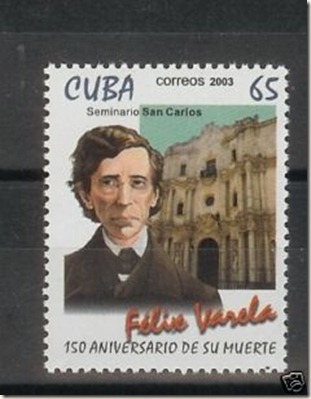 Fr. Varela was born in Cuba but spent his childhood in St. Augustine, leaving for Cuba at the age of 16 to begin studies for the priesthood.  The Seminario San Carlos was the seminary where Fr. Varela studied, was ordained and taught before leaving for the Spain to take his position in the Spanish Cortes [Legislature] in 1821.  As we all know, things didn’t work out once he got to Spain, and it was from Spain that he went to the US.  He never lived in Cuba again, although he maintained his interest in Cuban political thought and in Cuban independence.  He was finally repatriated, in a sense, when his bones were returned to Cuba in 1911; his remains are now buried where he once taught.
Posted by Elizabeth at 7:16 AM