Tolomato Cemetery is, well, a cemetery, and thus is all about death. But these are remote deaths, the last one some 125 years ago, and while we tell the stories of the people buried there, probably most of us skip over the fact that one day none of us will be there to tell that story. 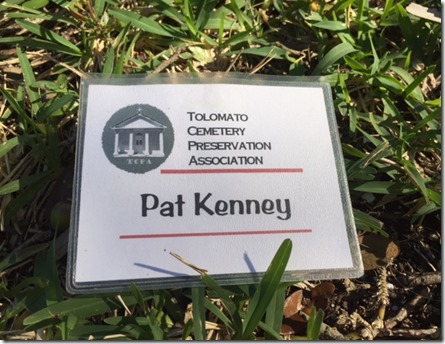 Two weeks ago, we had our first death in the TCPA with the death of our dear docent and board member Pat Kenney, who was also going to be the editor of our first book on the cemetery. She died about a year and a half after having been diagnosed with cancer. Pat was a strong, positive person and even after her surgery was hoping to resume her work on the book project.

Pat was born in New York but brought up in St Augustine and spent most of her life in the St Augustine/Jacksonville area, so she knew many descendants of those buried at Tolomato, and was always eager to help them connect the dots on sometimes sketchy family records. She was always very much a part of St Augustine. When her family requested that memorial contributions be made to Tolomato Cemetery – a large number of the donations came from her classmates at St Joseph’s Academy, Class of ‘66.

She had a real passion for helping people to know things! Pat was often to be found at the back of the cemetery near the chapel, either working with Louise on the genealogy table or simply explaining that area to the visitors.  She was very shy about photos, so the only photo we had was one where she was leading a tour and had her back to the camera…but her daughter, Kelly, supplied us with a photo of Pat. 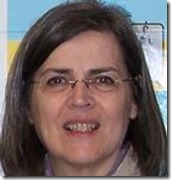 Our very first meeting with Pat came from a visit to Tolomato Cemetery in early 2011, when she visited the cemetery with a group of attendees of the Franciscan History conference at Flagler College. She then contacted us to find out more and to arrange for a visit with some of her students from FSCJ/Deerwood, where she taught at that time. The first time most of us met Pat was when she brought this group of students to the cemetery in May of 2011…and we were all completely impressed by the way she had prepared her students – many of whom were in the mortuary science program at the State College - and how concerned she was about them and their understanding of this site and about burial practices and respect in general.

Later, she contacted us about bringing another group from UNF, where she was then teaching, and also about getting more involved in the activities at the cemetery. And that was how Pat became a docent and then a board member and then the committee chair and editor for the projected book on the cemetery (which will be dedicated to her when it is eventually produced).

She wanted to come back after her surgery, but that soon became impossible. Yet Pat was still a presence in the cemetery. So now all we can say is “We miss you, Pat.” 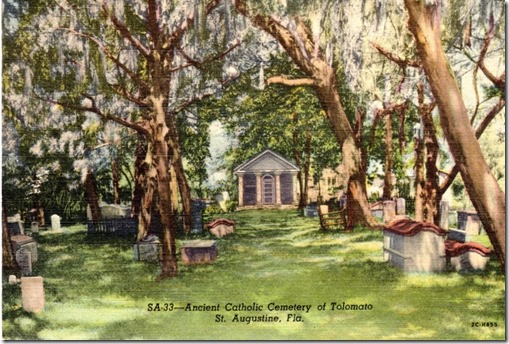 This is Pat’s obituary from the Florida Times Union: 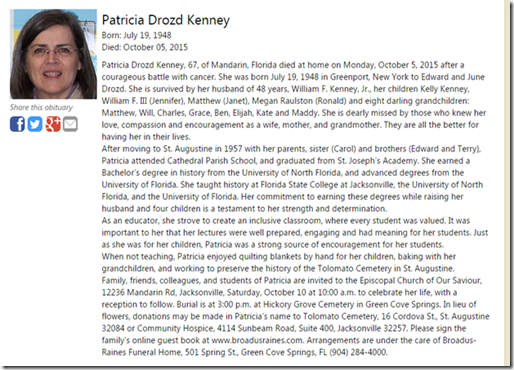 During the active time of Tolomato Cemetery, the funeral chant in the Catholic Church was the “In Paradisum.” The English translation is: "May the angels lead you into paradise; may the martyrs receive you at your arrival and lead you to the holy city Jerusalem. May choirs of angels receive you and with Lazarus, who once was poor, may you have eternal rest."

Posted by Elizabeth at 4:18 PM