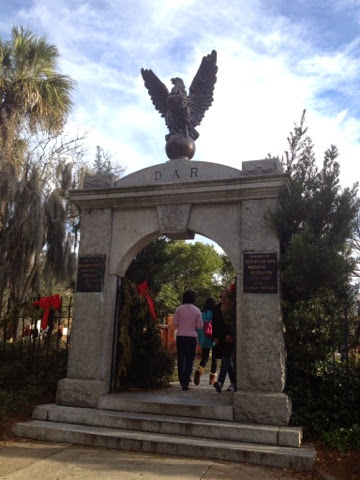 The Colonial Cemetery in Savannah, Georgia boasts this impressive entrance, constructed by the DAR, showing you that at one time, the Colonial Cemetery was "the" place to be buried in Savannah. The cemetery opened in 1750, still the British Colonial period in Savannah, and closed in 1853. The latter date coincided with a yellow fever outbreak, so it was probably closed for the same reason that Tolomato Cemetery was closed, in other words, because of fears the cemeteries had something to do with the spread of yellow fever. They didn't, of course, but nobody knew that the spread of the disease was connected with mosquitoes and standing water until Dr. Walter Reed's research in 1905.  So it was not uncommon in Southern cities to close the cemetery as a preventive measure. 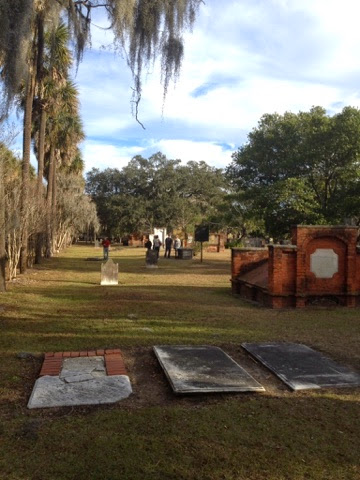 Many of the burials are those of important colonial or Revolutionary War figures. The cemetery was restored by the Garden Club in the 1970s, and is well-maintained by the city and volunteer groups. The cemetery is some six acres in size and there are about 9000 graves, although as you can see, there's lots of open space. This is because many earlier grave markers have fallen over or have been removed because they were about to topple over.  But I suspect that the now open field was a forest of markers in its day. 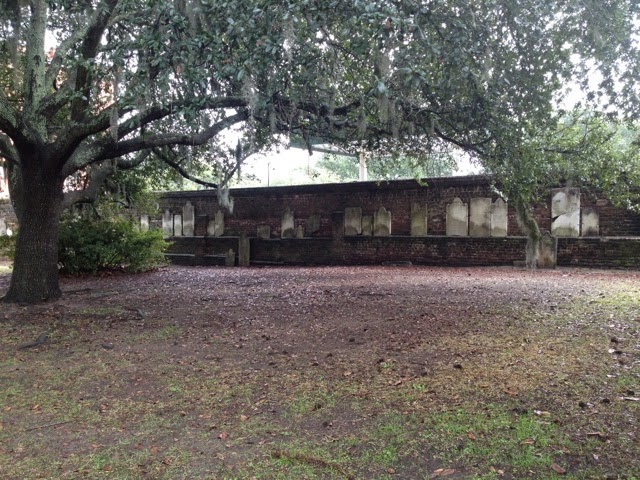 On the wall above, you see rows of markers that have been picked up and placed against the wall after they cracked at the base.
There were other solutions to the problem of broken markers, such as setting the remaining fragment of the marker into a concrete base or a thick upright plaque of concrete. I also saw some more modern solutions. Several of the markers had steel frames built around them, as you see in the photo below.   While a little unattractive, in my opinion, the frame does support the marker and keeps it not only in one piece, but upright. 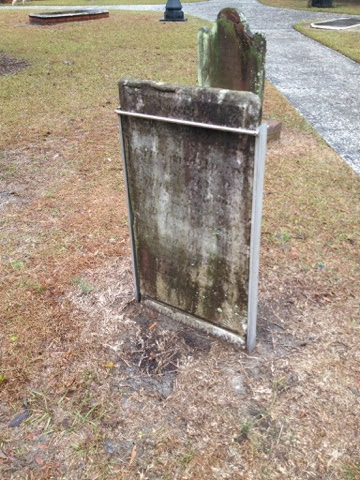 Many of the markers had very touching descriptions, and some even had rather dramatic inscriptions. The inscription of Joseph Vallence Bevan (d. 1830), Georgia's first official state historian, reads "There Was None, No None! Against Whose Name The Recording Angel Would More Reluctantly Have Written Down Condemnation."  Below is his ledger stone, which, as you can see, needs a little D-2 cleaner and preservation team scrubbing! 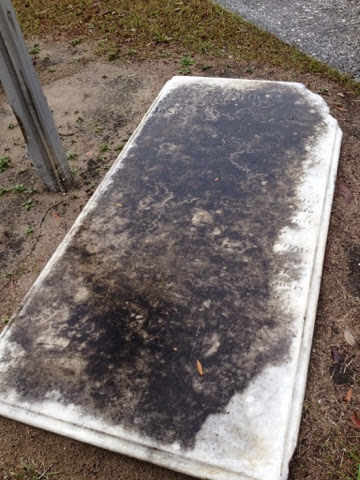 There were many attractive ironwork features around and in the cemetery as well. Savannah has a long ironwork tradition, similar to that of New Orleans or other 18th and 19th century American cities. St. Augustine, had it had the money, would probably have featured ironwork too, since the Spanish were known for their ironwork.   As it is, there is a fair amount of iron work in St. Augustine, although most of it is from the late 19th century onwards. The style in  Savannah was the English style, although there was a French influence, too.  St. Augustine ironwork is a combination of just about everything, although it is being overtaken by the rather neutral and functional modern aluminum fencing.  This not very good photo shows you the decorative curlicues and embellishments on the Colonial Cemetery fence (if you look hard enough). 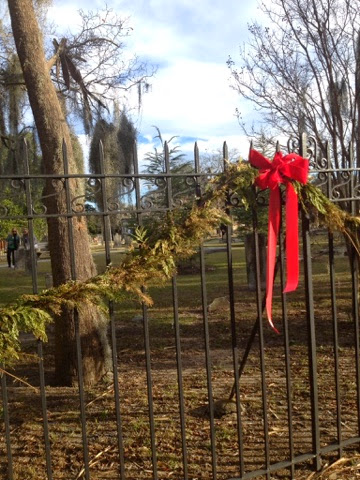 Colonial Cemetery, like Tolomato, stands as a peaceful, fenced island in the midst of a thronged, tourist filled city.  It has been a city park since 1896, but the cemetery has been on this site for some 264 years. Tolomato, first as a Franciscan mission and then as the cemetery, has been on its site for somewhat longer than that, probably more than 300 years.  Visitors can contemplate these tranquil places as another busy year comes rolling in, and we wish a happy 2015 - and many years thereafter - to all! 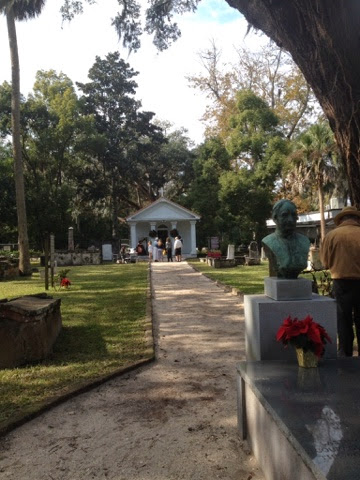 Posted by Elizabeth at 4:48 AM